Hey gang, you guys seem like a good crew to ask. Sorry if this breaks any rules, feel free to delete if it does.

I’m trying to work up a way to have some failure indicator lights in a 12v light circuit. I have (5) 48w incand. 12v fixtures on individual circuits. I would like to have an indicator light for each circuit that lights on filament failure.

I tried a cheapo DC current sensing relay and haven’t had much luck, perhaps due to a bad unit. While I wait for a new one, I was thinking, this might be something that arduino would be good for. Or perhaps there is another solution I’m unaware of.

If anyone has any input, I’d be happy to have some help.

Wrap a coil around a reed relay, NC if you can find one (eBay…). Saw this Popular Science(?) In the 60’s or so for detecting car bulb failures.

put a LED in parallel with the incandecent bulb, when the bulb fails, the LED
will see 12v and light up, when the bulb is still working, almost all the
current will go through the bulb and the LED will be dim, if on at all (and a
resistor on the LED will make this even more so)

much simpler than DC sensors, etc

Awesome, thank you both! Moose, that sounds simple enough. David, could it really be that simple? I’ll give it a try tomorrow, I’ll have to find my LED stash.

Should have thought of that @dlang. Any bulb, even an incandescent would work. You might need a couple sensed bulbs in series or the LED will see full voltage regardless if the sensed bulb burns out or not.

It’s like the fuses that light up when they blow.

just make sure it’s a LED that can handle 12v

you can now buy fuses that work like this, they have a LED in parallel with the
fuse element and the LED lights when the fuse blows. An incandecent light will
have more resistance than a fuse element, but it should still be tiny compared
to the LED

Thank you, I’ll report back. I believe I’ve got some resistors along with those LEDs to drop the voltage.

I found this double throw reed relay on the popular auction site. You’d need to experiment with winding a coil around it to see how many turns of wire you’d. Speced relays would tell you in ampere turns, but might be hard to find a datasheet for these.

That seems like an interesting solution, and right up my alley. Unfortunately, this project has a deadline, and it’s almost dead. So, a reed relay is different than a reed switch? 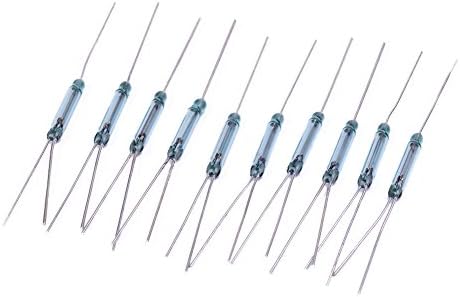 Same thing. Wikipedia says they typically take 10 to 60 ampere turns, so 60 wraps for a one amp light should do it.

Probably would get it a lot quicker from Amazon Prime than Hong Kong. That one says 10-20 ampere turns, so 20 wraps divided by the DC current draw.

Awesome, thanks Moose. So does that mean a 4a light will take only 15 turns? That would be excellent.

You’re quick! I just re-read your first post and was going to say that. Maybe a few extra turns for grins, don’t need very large gauge wire for 4A. 20/4 turns, 10-15 would be more than enough.

Thanks a ton Moose, they will be here tomorrow. I’ll keep you posted on progress!

40+ years of electronics and programming has made me a fan of old school for stuff that needs to last for years. I did our 6 zone primary/secondary home boiler controls with a box of relays instead of a PLC…

I’ve never kissed a Moose, but I could right now. Moose! Thank you!!!

Glad it worked out! What are all those lights going on?

They are for an alarm panel on a boat. Thanks again Moose, that was a big win after struggling with that problem for a while.