and if you look at my calculations, I planned for 3/4 spoilboard while you use
1/4" and I planned for 3-3.5" from the top of the sled to the level of the
chains.

so that would account for the 1.5" difference between our calculations.

you should be able to operate with some error, 1.5" would be pushing it, but
somewhere around 3/4" should be getting into reasonable.

so shortening the top beam support from 8" to 6.5-7" is very reasonable for your
setup.

If you plan to have 3/4" plywood be the thickest thing you work on, I would
consider going to to 6", if you plan to work on thicker stuff, keep them on the
long side.

I’ll point out that it’s a lot easier to add a thicker spoilboard when you are
working on thin stuff than it is to remove thickness when working on thicker
stuff.

note that if you remove a brick from the sled, the CG will move away from the
sled, so you would want things a little taller in that case.

So if we still are using the outdated original frame with no top bar design, what would be the easiest conversion to adding a top bar? Should I just bolt a 2x4x10 onto the [wings? ears? not sure what to call them] of the original frame and relocate the motors? I like the idea of reducing flex and increasing accuracy, but don’t feel like building a whole new frame. Making the CNC cut one was such an achievement for me!

Sounds right. Even if there is flex parallel to the worksheet in the ‘rabbit ears’ (what I called them), it should not effect accuracy to much and if, a few ‘stiffeners’ will do.

In the original frame, there are two problems

the new frame solves this by bolting the motors to the top beam with as little
offset as possible, but this requires moving the beam forward of the frame. This
should probably be about 4.5" or so, so you could stack 3 layers of 2x4 between
the existing wings and the new top beam and be in the ballpark (see if your
chains are parallel to the workpiece with the sled balanced and change this
stack accordingly)

it won’t be the prettiest thing, but it will work.

The motors are 19" (482.6mm) above the plywood work space. I don’t know if this is too much, but I found in another post that 18" was what it was in Bar’s Bolt Together frame. And the work space is inclined at 13.5 degrees. 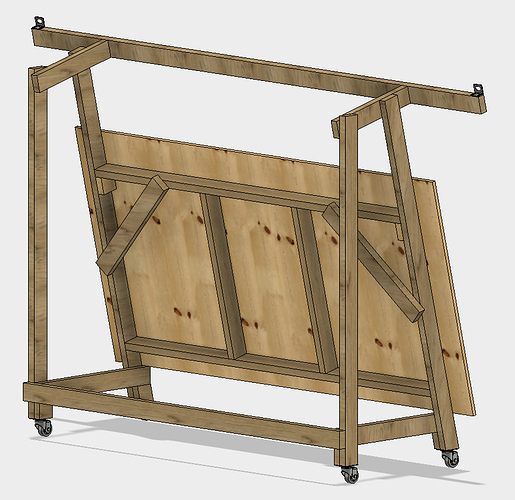 Cool. That’s pretty much the same thing I was thinking. It loses some of the cool look but I care more about function and accuracy. I will probably do the top bar modification when my triangulation kit comes in (since I’ll have to recalibrate then anyway).

Now, quick question in general: How have the big improvements to the frame and the triangulation setup helped yall’s individual performance / accuracy on cutting parts that are near to the extents of the cutting surface? I’m talking mainly about the corners and the upper middle near the very edge. Whenever I try to cut somewhere besides the middle and lower middle 70% of the plywood, my machine struggles.

middle and lower middle 70% of the plywood

If I try to cut a part all the way at one of the lower corners, I have to babysit the machine quite a bit, or the cuts will not be straight.

Likewise at the top edge, I have seen the flexing issue cause problems.

I get around these problems for now by pretty much only cutting parts in the lower middle section of the plywood (where the maslow seems to do the best job by itself) and avoiding the upper 30% of the plywood entirely. I rotate or shift around the plywood accordingly and have maybe 3 or 4 design files instead of 1 to cut parts on a full sheet. It works but it’s not elegant.

With the a top beam design, the problem becomes “what happens when the sled goes
off the edge of the plywood”

This is why you see people talking about building skirts for their machines.

there should be no problem with 19" above the frame, we did find that if you get
down to 15" or so you have problems. 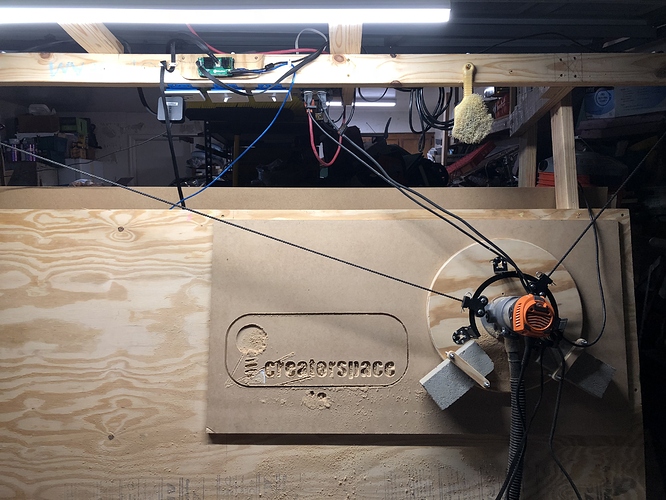 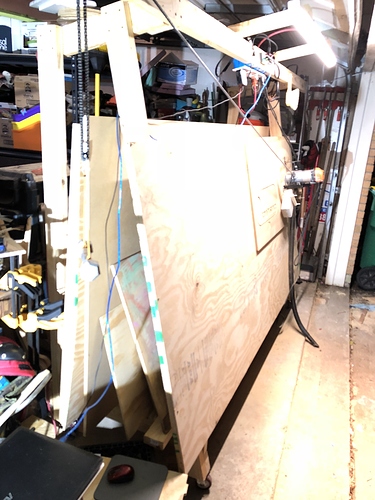 B92CFA06-5C7D-424A-9551-C725C0B1840A.jpeg3024×4032 2.18 MB
So, I finished my redesign of the default frame with panel cart. I added switches and outlets. The left switch is for the light and Arduino/Maslow boards. The right is for the router/shopvac. I have one plug on the far left that’s always powered. It also has two USB ports built in. I plan to use one for a Raspberry Pi, once I figure out how to get it to work. I’ll be adding an arm and VESA mount for a 13” HDMI TV I have for the MasPi (@bar should trademark that)

Could you point me to the discussion about the problems when your motors get to around 15" offset? I am just above 15" in my setup. Thanks in advance.

I’m not sure if it was in this thread, on the discussion of Bar building the new stock frame, or in PMs as I was working with bar building it.

This made the distance from the top of the work area to the motors 7" shorter than designed and even with the extra room I had left to let you use unistrut (1 5/8" tall instead of 3.5" tall for a 2x4), this just didn’t work at all near the top of the workpiece. Extending the legs to be several inches taller made things up past the 18" mark and things work again 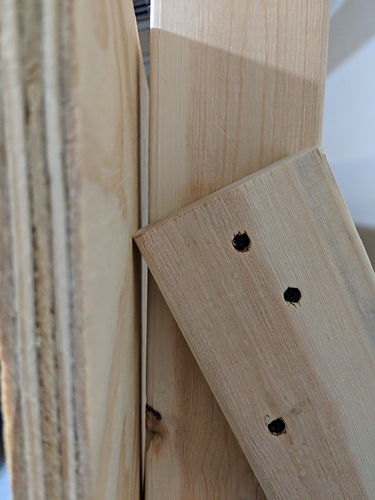 IMG_20180428_193334.jpg3024×4032 3.06 MB
, such that it would warp the material being cut. I used a hand saw to trim the corner flush, but it makes me wonder if I did something wrong? Some of the early photos show this corner protruding above the 4 ft. material height, so that its not a problem. Perhaps the dimensions got changed along the way? If its not just me, then its something worth solving in the design – perhaps cutting the corner off when cutting the pieces.

One other small note for the instructions was that I mounted the top cross bar backwards, Maybe it would be worth noting that between step 8 and 9, the frame is flipped over so that the top bar protrudes forward. Its clear in the pictures when you know what to look for, but when I was doing it for the first time, I got it wrong and had to reverse it (doh!). No big deal though.

Other than these two small notes, the frame went together easily and seems to be solid so far!

you either need to trim the corner off (as you did) or put the screw near the
front so it doesn’t swing forward.

trimming the corner off is the easiest thing as far as I’m concerned.

I started with the new frame with a 10’ 2x4 top beam and changed it to unistrut. I changed the two 8" beams such that the unistrut now rests on top instead of attached at the end of the 7"/8" members. I want to slide the unistrut in and out based on the work surface thickness. I currently use large C-clamps to hold the beam in place but have found that it is hard to get the unistrut to sit square because the sled twists the assembly. I apply a twisting force in the opposite direction with my hand but I is really hard to get the clamp tight with only one hand free. Has anyone changed to unistrut and how did you attach it to the wooden frame and did it have sliding capabilities to facilitate different work surface thicknesses?

Getting ready for winter I just hung my new stock build frame on my garage wall. I would suggest if you’re considering this consider making the spacing of the legs line up with your studs better than it does as designed. I just used a chunk of 3/4" (18mm) plywood lag screwed to the wall.

the leg spacing was not made with stud spacing being a consideration, it won’t
hurt to adjust them to match your wall.

Yeah I know I was mostly posting the note for future builders who might think maybe I want to hang it, that they might want to match stud spacing. I decided on the easier build a header on the wall option, but if I were building again I’d align to stud spacing.