Throwing my hat in the sled modification ring

As long as it’s under 70 pounds

he didn’t respond to e-mail and when I called he just said that he didn’t do
shipping and has over 300 happy customers without it and then there as dead
silence on the phone.

sounds like you are mixing up two companies keithg is in PA and perceision laser is in NC.

I can pick up from percision laser if you want

you are correct, I was mixing them up. Precision Laser is the company that
wasn’t willing to talk about shipping.

apologies to keithg, I don’t think I ever heard back from him in e-mail, I may
try again.

I just got an answer back from a place local to me, I have one more question,
but if it gets the right answer, I’ll order from them.

very few makerspaces have lasers that can cut metal.

Another 45 degree set up
Nylon bearings on everything everywhere 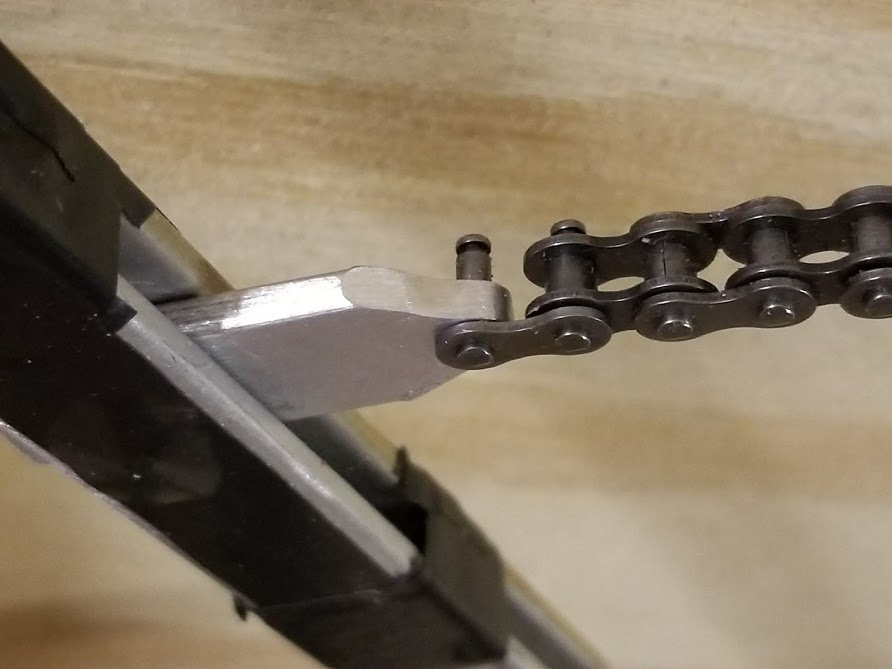 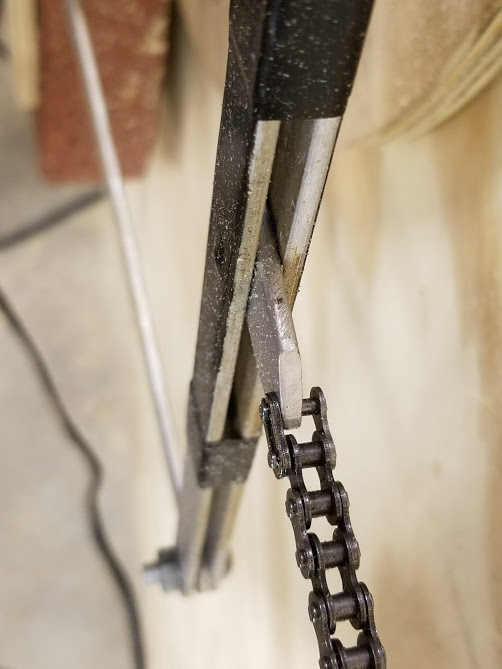 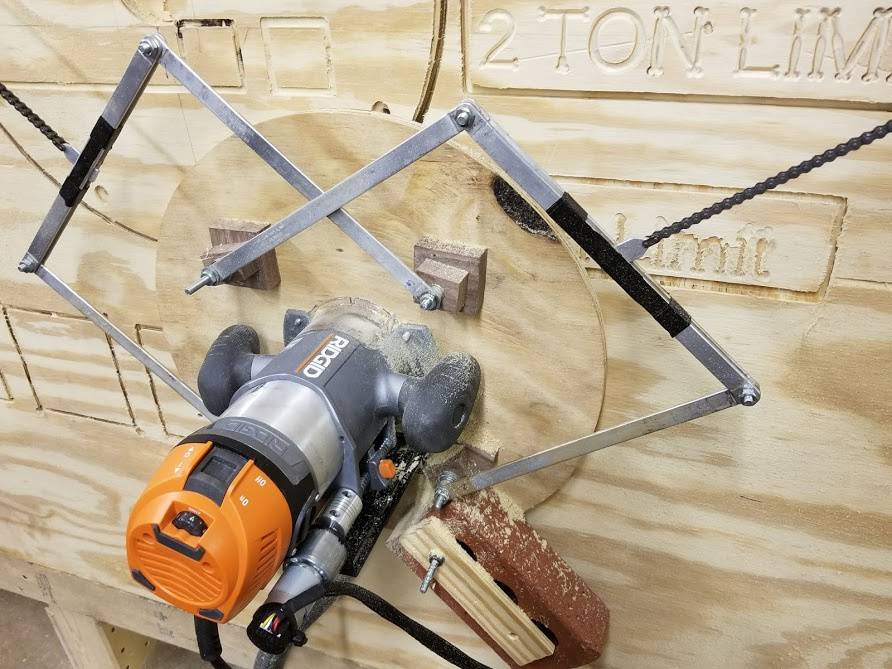 I toured one in Baltimore that had a water jet cutter so that might be an option elsewhere. Kinda expensive per minute to use, though

Nice!! I like the double-half-jog with the crossing arms! (I assume that’s what I’m seeing?) I had hoped something like that would work with metal, do you find it keeps things aligned well enough still?
That looks to be about 10" arm lengths?

Is that aluminum? Did you drill them all in a stack?

It seems to work well so far . I am still struggling with the calibration but have not had must time to work that yet. The arms are about 10inch … forget exact dimension … Worked out the spacing with trammel points on the sled before I cut out the middle so I had a center point. Then built a sample on the surface plate. Then a jig to cut and drill them on the mill. Made bushings out of nylon for everything except the chain connectors. The bushing also spaced the arms to clear in the crossing. Had some hardened pins (salvaged from the inside of old hard drives) that matched up with a #54 drill. Used that for the pivots on the chain arms.

Still have to clean up and finish things …

About 10x the effort as your kits but had the material and wanted to see what I could work out.

Then I have printed a pair of chain mounts. Is pleased with the results so far. 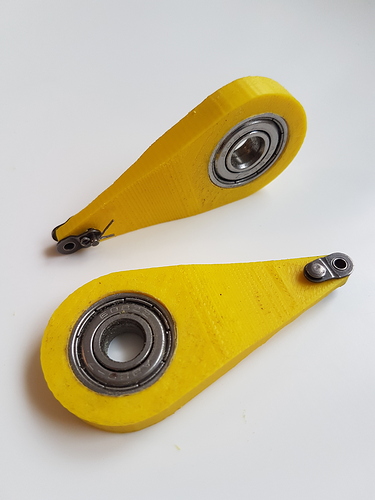 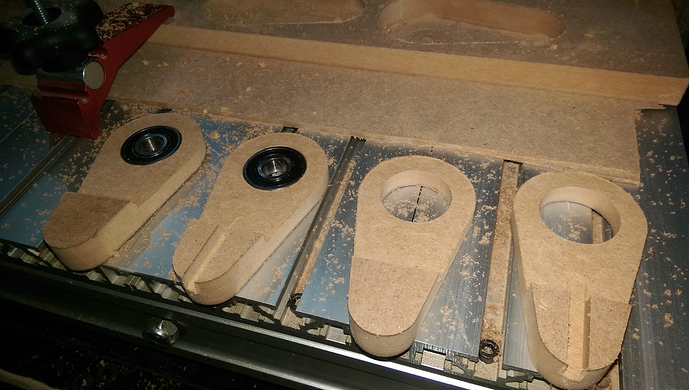 Oooh! Those look nice!! Have you stress tested the connection point? I realize 3D prints can be quite strong but it would be interesting to know how much they can handle before they fail.

Each one will regularly experience ~35 pounds and could experience spikes as high as ~66 lbs!

I totally agree with pTb. The prototype of hardboard I used did not survive the mounting

Lucky for me.
Have seen pictures of sleds with grain going vertical, that where torn apart and have burned an early motor-shield, while the Maslow was trying to go into outer space. The next prototype is cut out of a cutting board that I had laying around.

I am planing to use 2 of these: 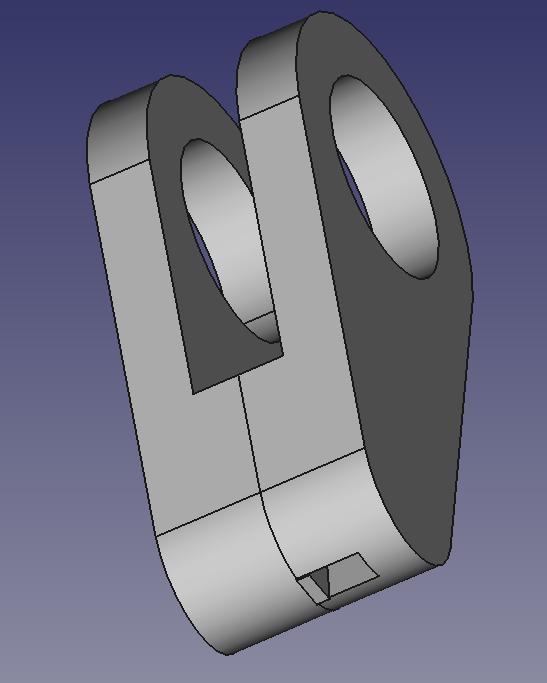 I have some thoughts regarding the use of (roller) bearings as pivot points in the linkage design.

I have put a lot of thought into the forces involved and I hypothesize that greatly reducing friction in any of the pivot points of the linkage design is not necessary to achieve smooth motion and accurate cuts. I know that sounds ludicrous but please bear with me

First, picture the beautiful ring and roller idea that @bar presented in the first post on this thread. In order to achieve smooth motion with this design the ring and roller must both be smooth; with this design reducing friction at the rollers will always help with smoother motion and accuracy. I think it’s easy to take that concept of extreme friction reduction and needlessly apply it to other designs.

To illustrate why I believe this lets totally change the scenario. Imagine a smooth horizontal bar with a roller/pulley on it and a rope hanging from the pulley 12 feet to the ground. If I push laterally on the rope near the bottom I will have to move my hand quite a distance in order to move the pulley along the bar even a little. That is because the roller “wants” lateral force in order to roll along the bar, but the force that the rope imparts on the pulley is not entirely lateral, in fact it’s barely lateral (which is why the pulley only moves a little).

In this scenario when the rope is static the rope itself is applying only a downward force on the pulley, when we move the end of the rope the angle of that downward force begins to change (points more to the right in the illustration below), once that angle overcomes the friction in the pulley the pulley will move until those forces equalize again. If the friction in the pulley is extremely low the pulley will eventually move along at the same rate that we push the rope laterally. However if there is even a small amount of friction in the pulley and we move the rope at a constant speed eventually the motionless pulley will overcome it’s own static friction, move forward past the point of equilibrium and stop (it will pass the point of equilibrium because of momentum), then as the rope catches up the force will build up again and it will “jolt” forward again. 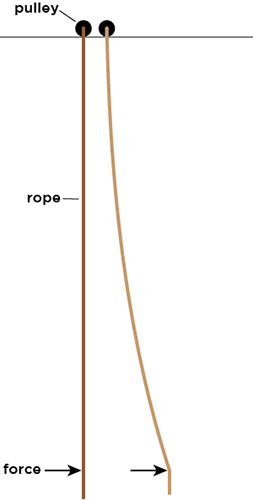 Now if instead of just pushing laterally on the rope we were to also pull down (creating tension in the rope) then the pulley would follow better because the angle of force acting on the pulley would increase. This angle of force will never be much though, and it can never exceed the angle between the horizontal bar and the rope. While this does work to move a pulley along a bar you can easily see how the forces involved are inefficiently applied. If we want the pulley to remain above our hand we need to apply an extreme amount of tension on the rope and we need to reduce the friction in the pulley as much as possible.

If we transfer this thought process to the ring/roller Maslow sled modification it’s easy to see why the roller can tend to be jumpy (certainly not in all cases, and this is NOT a post discrediting the ring idea (which I happen to love!), I’m using it to illustrate the different forces involved in different designs.) Now that we’ve transferred our mental experiment to a Maslow sled we can talk about rope tension as radial force - a force that is always radial from the router bit; and lateral force can be imagined as a force that is always perpendicular to the radial force. Critical point: The Maslow design inherently has lots of radial force and very little lateral force.

Time for an intermission? Maybe go brew some tea and put on cozy socks, I’m about to get to my actual point…
…

Welcome back! I’m glad you’ve stuck with me!

Now lets do another thought experiment (you can actually do this for real if you want, I did). Take an 18" smooth metal ruler or yard-stick (or meter-stick?) and hold it close to one end between your thumb and forefinger. Using your other hand pivot the ruler so it is horizontal, now pinch as hard as you can with the hand holding the end of the ruler and let go with your other hand. Unless you have a magically light ruler, impossibly strong fingers, or some sort of weird gravity problem (@mooselake I’m looking at you) I would bet that you can not easily hold the ruler horizontal (a cork-backed or wooden ruler is cheating).

I know this is pretty elementary but I bring it up to illustrate that a rigid bar, given a single pivot point at one end, will alway seek to align itself with the forces acting upon it; in this case, gravity -AND- even a small, lightweight lever like a ruler can apply a pretty substantial amount of force at its pivot point. If we take the same ruler and pin the far end to a wall and pull, the ruler will align itself with the tensional force between your hand and the pin (easily overcoming the gravitational force).

Now if we transfer this thought process to a linkage-modified Maslow sled it’s easy to see that the large “radial” forces in the system will seek to align the bars exactly where we want them. Each of the 4 bars that connect to the sled is a lever with the inherent system forces acting along its length.

All of this is not to say that friction does not matter! It most certainly does!! All I’m saying is that the friction in the pivot points of a linkage design matters very little and that the forces in the system work with the design. You would need to have some pretty substantial friction in order to see or measure a difference in accuracy or smoothness. With that in mind I believe that using roller bearings is major overkill for the linkage design (overkill is not always bad BTW). If you don’t believe me, build a linkage and put 30 pounds of force on it and try it out!

In summary, to achieve accuracy:

I’m sorry for the long post, it’s been on my mind for a while and I don’t know how to convey the thought succinctly enough to avoid lots of backlash. I should also reiterate that this is my hypothesis, I am not entirely certain how I would go about proving this concept, but I’ve felt it with my own hands and this is my best guess.

Crazy idea warning
What about modding a pressure washer and mounting that on the maslow. And do Maslow water jet cutting.

EDIT
As suggested by @ImpetuousWombat I created a topic for this.
http://forums.maslowcnc.com/t/maslow-waterjet-cutter/813/1

What about modding a pressure washer and mounting that on the maslow. And do Maslow water jet cutting

I’d say start a new thread and get some input. It certainly sounds cool

@pillageTHENburn Love the analogy and the GREAT explanation! I followed your thought process and find it very convincing! Thanks for the great post!