Okay what are they called?

Am i mistaken, or is #25 chain not actually roller chain?

I seem to remember that roller chain has actual rollers, whereas #25 ansi chain does not have rollers. Instead it has bushings. IIRC, #40 chain is the smallest chain that uses actual rollers.

Edit: i found where i had read that

interesting reading… more than you ever wanted to know about chains…

This is correct, but I’m not sure it matters much.

On the surface, there appears to be several issues with the TDR concept:

Maybe a laser TOF would be more feasible, but the affordable, off-the-shelf designs do not hit sub-mm accuracy. It might be good as a rough position audit for safety cut-off when something breaks, but not for moving the sled in a precise line.

I have designed a different function of the maslow. Moving the motors from the outside edges, and onto the actual platform with the motors. that way the spacing between the motors is always the same it will never change, then cables wrapped on grooved drums are spooled and measured (trying to figure out how to manipulate software to understand that pulled distance for calibration) and at the tops were the cables actually anchor are a type of swiveled anchor point. so no need for bricks anymore as the motors become some of the weight, also the sled i made out of epoxy granite and has a super smooth hard surface glides well and will last for ages. the benefit here is the motor and electronics and everything can be contained in one unit and stored safely away. once i’m done working bugs out with it i’ll debut here. but some food for thought for now. cables work well just like someone said basically don’t leave hanging around as they will develop some “memory”

how do you mount the motors so that the chain is always pointing directly at the
bit, no matter what the chain angles are?

…sounds tricky, but would be great to see a “portable” Maslow!

Please post pics when you get even to just a mock-up stage!

Awesome, I’m definitely interested in cable drives. A rest would allow the cables to sit without constant tension. I’m working on a new frame design that can fold up.

this was my concept, but have not got around to making it yet. motors mounted on the metal plate that hold the bearings which swivel around the ring. 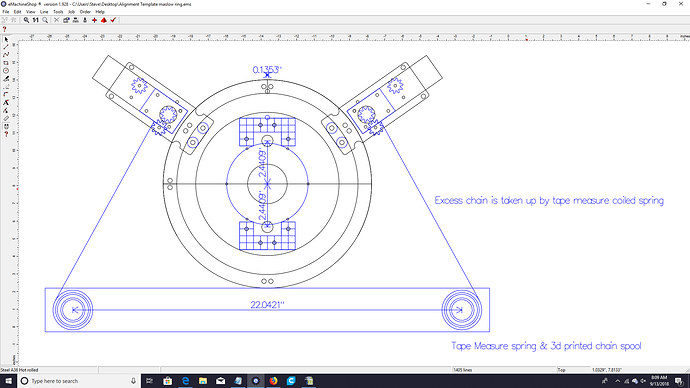 Going to work on some concept art and CAD of the systems I’m looking to develop. Have CNC machines and 3d printers to help others as well. Collaboration is the strength of open source.

one problem with this concept is that when the tension is low, the weight of the motors is going to cause them to drop, and this will shorten the effective length of the chain.

If you could figure a way to make this work (hopefully something other than having to drive the bearings to a position with a separate motor), this would simplify things significantly.

If you could do a separate mechanism to measure the position of the motor (similar to what the goliath does), then you could even fix-mount the motors as the sled tilt wouldn’t matter.

Those are individual engineering problems true but my root concern is scalability. With fixed motors their weight doesn’t and to the mass being moved. With dyanmic motors you limit the amount of mass you can move accurately. This is why the core xy design is so popular in the higher end 3d printing space. There is some wiggle room as long as the sled mass stays similar to that of the current sled.

If you could do a separate mechanism to measure the position of the motor (similar to what the goliath does), then you could even fix-mount the motors as the sled tilt wouldn’t matter.

Yes I thought about adding some constant force springs to coutner weight the motors so their 1.5 lb weight is somewhat cancelled out or just make it for a 4x4 ft sheet so tension is always pretty good. Rarely do I see any jobs that require a whole 4x8’ work piece. a 4x8 canvas is more of a convience than a necessity for a lot of people.

goliath web site says they use radio transmission, which is unfortunately a topic I know next to nothing about. I think goliath will be slower than maslow. Their videos show 5 repetitions to just cut through a single piece of what looked like 1/2" plywood. I’ll email them to see if they want to share any of their technology. given they are already behind in delivering their orders not sure they have time to help others?

goliath web site says they use radio transmission, which is unfortunately a topic I know next to nothing about.

I would be very surprised if this is the case, precise distances and
speed-of-light do not work well together.

I think goliath will be slower than maslow. Their videos show 5 repetitions to
just cut through a single piece of what looked like 1/2" plywood.

If you look at the maslow videos, you will see @bar doing the same thing

Looking at the Goliath KS pages it’s way behind schedule, the backers are demanding refunds and screaming lawsuits. No idea what’s not working, the updates are backer only and the comments too many to read. Perhaps it’s not a good example of ways to measure length?

Chain drive has been used on other CNC machines, perhaps some investigation of how they’ve solved (or not solved) the positioning accuracy issue is in order. Giggle found a lot of hits on chain drive cnc accuracy, better to learn from history than make the same mistakes again.

The other type of cnc I was thinking of building before I saw the maslow would also have used chain, but in a rack and pinion type of arrangement, with the “rack” being chain, and the pinions being the motors with sprockets. It might be something worth thinking about if someone ever wants to create a more traditional cnc with the maslow parts, although you would need rails and a gantry, which adds a not inconsiderable amount to the build cost. To get that cost down, you might be able to make the gantry parts for a chain “rack” + pinion cnc with the maslow.

Here’s a similar idea, but using timing belts instead of chain. Trying it’s on my lengthy to-do list

it is already a working design just trying to work some issues out. I’m by no means an engineer of sorts, Just have a passion, my main work is in Law Enforcement. But I do get a solid brain fart that can materialize into something once in awhile. I would like it to be a completely self calibrating machine meaning that, you set the product up on a known reference point and pull a cable to the anchor site, and it automatically measures that distance digitally, which since its measuring steps when in operation i would think this is fairly easy software design. and then it would measure exactly the next one, and since the motors are always the same constant there is no guess work in the triangulation math, also working on a 4 motor design as well. it weighs enough to put good tension on the cables, which are currently 1/8 but think may go to some metric size slightly larger, and they are SS uncoated.

Here is some more food for thought. https://www.youtube.com/watch?v=QAy1dD6UJrY

one inherent design flaw that would concern me is chip out debris, if one of those omniwheels run over that debris while cutting your resolution is toast at that point.