@WoodCutter4 thanks for the response! Thanks for mentioning the spreadsheet. I somehow had missed that so I’ll need to take a look and pass some numbers through. This current design only has the top bar at 24" above the top edge of the material, so I may play with those numbers a bit and see if closer to 30" as you mentioned would be better (and if it’ll fit nicely in my garage!).

At this point I’m not sure how much flex the bar would have using 1/8" thick tube vs the more common 1/16". I think your suggestion is great though and it would be marginally more work just to add some angled support bars which I added to the mockup below.

The angle I was planning on is 15 degrees, which I think is in alignment with the stock frame. I’ve seen people use other angles like 10 or 12 degrees, so I’m definitely open to suggestions or comments on if 15 is the right choice.

As far as the spoil board, the plan is to mount it to the internal “frame” within the frame design. The inside rectangle is 4’x8’ at the edges, which should allow me to drill 3-4 holes per edge to mount the backer board. Then, for the 8" wide perimeter around the 4’x8’ inner frame, that will get two layers of material. The first layer matching the thickness of the spoil board, and then the second layer matching the cutting material thickness. Ideally this second board should not really need changed often if the material thickness you cut doesn’t change often. The plan again here is to drill some holes in the square tube to allow it to mount. Then the top layer can just be screwed into the first layer. That was my plan at least to keep the cutting material secured and to provide clearance over the edge for the sled to ride on.

I attached a revision to the original drawing to include the angle annotation, then the change from 24" to 30" for the top bar to the work area, and the angled supports. Thanks for the feedback! 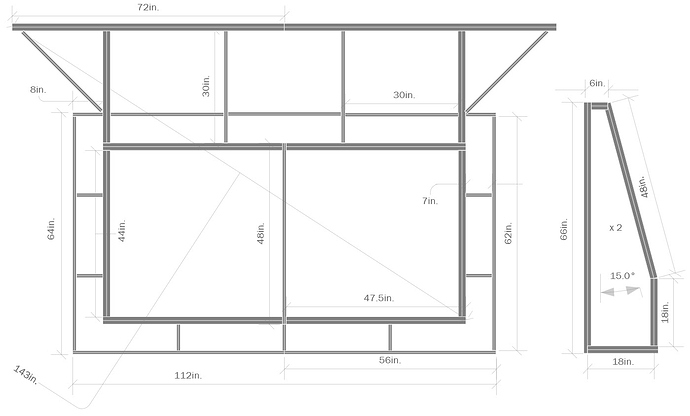 At this point I’m not sure how much flex the bar would have using 1/8" thick
tube vs the more common 1/16". I think your suggestion is great though and it
would be marginally more work just to add some angled support bars which I
added to the mockup below.

The angle I was planning on is 15 degrees, which I think is in alignment with
the stock frame. I’ve seen people use other angles like 10 or 12 degrees, so
I’m definitely open to suggestions or comments on if 15 is the right choice.

we haven’t had anyone do any systematic testing of this yet. the closer to
vertical, the less of the weight of the sled is on the workpiece, which would
decrease friction, but also decrease the force available to plunge the bit into
the workpiece (which is part of the reason a vertical frame isn’t good)

we had some early testing that 5 degrees was iffy, we know that 20 degrees has
too much weight on the workpiece and doesn’t work. So I would guess that 10
degrees is probably better than 15, but as I say, nobody’s done any systematic
testing yet.

Agreed, I just will be using 1/8" wall thickness metal because it’s what is readily available (and cheaper for me) for this build. I agree welding the second tube like you mentioned would be best for deflection. I’ll probably start with the single and then it can always be modified later. I just figured after seeing people use a single piece of unistrut for the top beam that a 2" x 1" x 1/8" beam would be strong enough.

I may try to revisit my design to allow for adjusting the angle, although the adjustment may just be shims where the main frame will seat with the supports.

Thanks for the input!

I just figured after seeing people use a single piece of unistrut for the top beam that a 2" x 1" x 1/8" beam would be strong enough.

You might be surprised. A single strut, without sufficient supports will twist and flex quite a bit since it is “u” shaped. Anything will deflect, just a question of where and how much.
One thing to think about is; you will probably fasten the motor brackets to the top of the tube and you will need to be able to fasten pulleys or bearings along the top bar for chain slack management. If you start with one tube and then later you want to add a second, it would probably be easier to add it under the first (raise up the original, if it isn’t welded) but it would require recalibration since the motor height would be different. Easier yet would be to just start with two, especially if costs aren’t much of an issue and you have the goal to eliminate flex.

you do not need 18in of clearance on the bottom. 12" should work if you do not use bricks (lead is best) . I have to stand on a step; stool to reach the top of the motors I think 1x2 tube with 1/8" mild steel walls is more than enough, I would not worry about any flex especially with those triangle supports.

it is good you have it in 2 sections because if you ever want to move it out the garage, you will probablay need to disassemble it anyways.

if you just want to bolt it together instead of welding you can use tube connector nuts
http://www.superior-components.com/tube_connectors.htm
this one below is great for square 1x1" tube
3043-4-1

I used to weld sq tube a lot, but typically I just bolt together stuff now, easier and occasionally I take things apart and easily repurpose the parts.

if you want the center a little stronger consider trying using triangles. 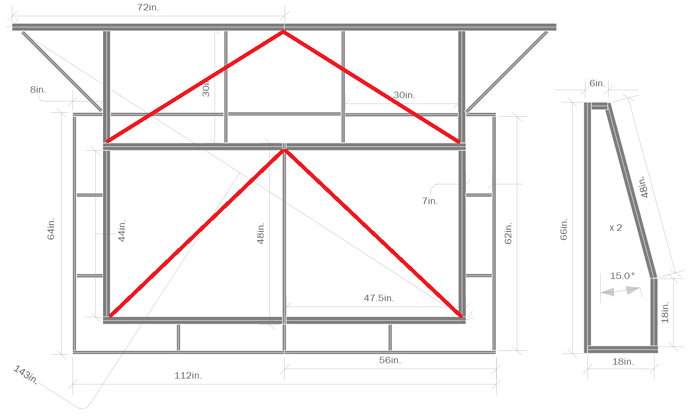 @mhnudi I second this design. Always use triangles when you can!

Thanks for the tips, especially about those tubing connectors. I hadn’t seen those before and I can see them coming in handy, especially for the spoil board which could be nice to make adjustments to over time.

I’ll plan to add the angled supports on the center frame area at a minimum. I may set up the top and see how rigid everything feels and then make changes as necessary.

Figured I would post back after making modifications, including a breakdown of my cuts. All cuts planned are from 72" stock since that is what I have available. I’ll probably transition this thread into a build log as I make progress. This frame is going to be super overkill, but I think it’ll be a fun project. 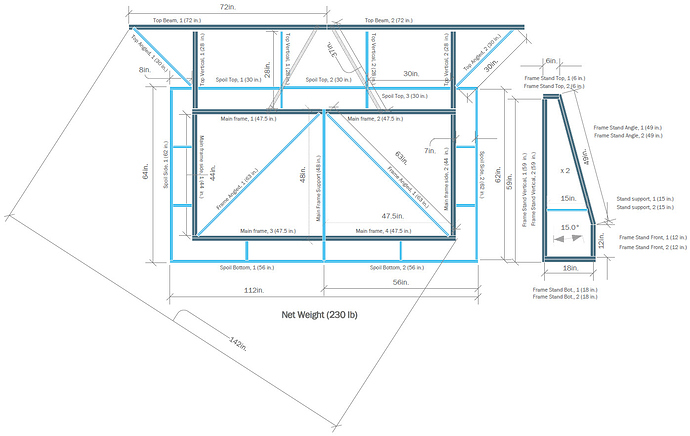 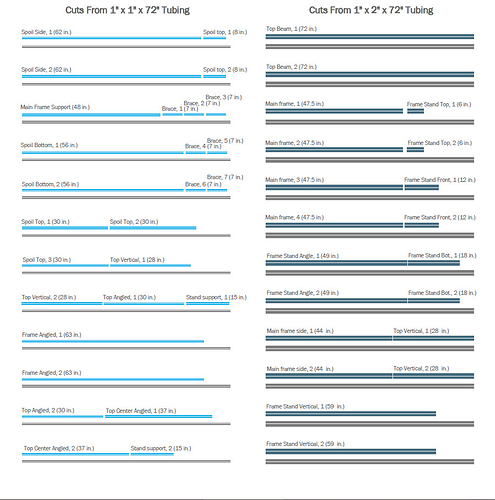 As an aside from the frame design, I’ve been working on dust collection and managing noise in preparation of getting the maslow up and running. I live in a close proximity subdivision so I’m trying to make sure that I keep noise to a minimum. I have a Jet DC-650 dust collector and here are a couple shots of the mostly finished case. Missing from the photos are the interior sound insulation and the hose connections on top, as well as the air vent out of the back. Due to the high flow rate of the motor the temperature has been staying in a pretty safe range without additional forced flow into the box. This enclosure took the noise from ~ 92-95 decibels to around 67 decibels at 3 feet away from the enclosure. Quite a significant noise reduction and a good start or the project. 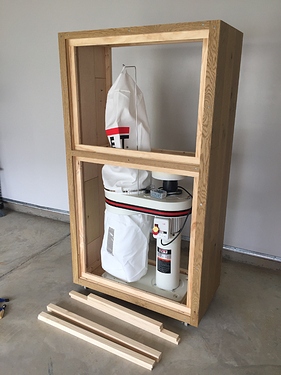 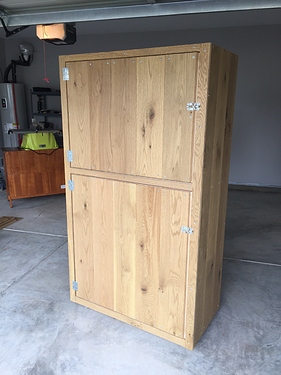 Most of the box was assembled with a kreg jig with materials found at a local Habitat Restore. Makes for a nice looking addition to the garage!

is never a bad idea

Always love to see it. Keep it coming!

looks good. 230 lbs does seem like overkill. I have not weighed my aluminum frame but I would guess about 45 lbs. I’m guessing 1/8" thick steel tube is the main reason for the 230 lb weight. If I made it out of steel I would of used 1/16 wall tube, or even 18 gauge tube, but 18 gauge tube is much harder to find.

I guess if you never move it, it’s fine. but if you do plan to move it thinner tube wall will save you $$$ and IMHO not have any drawbacks.

Wow! Lovin’ the drawings and great work on the dust collection…I need to do that. Can’t wait to see what you do with the Maslow.

if you live near a steel distributor center, they sell the steel 20 or 24’ lengths typically, you have a lot less scrap drops vs 6’ long pieces and delivery fees are typically ridiculously cheap $10 to $20, but only if you are close by.

Metal Supermarkets is cheap and will deliver for free in a 25 mile radius.

I can’t remember if I specifically mentioned this but I was able to get a really good deal for the 6’ material second hand locally, which is the main driver for using the 6’ and ⅛" wall steel for the project. I don’t plan to move from my current house for quite a while, so although I know it’s going to be a beast, I’ll probably proceed since this material was significantly cheaper than buying thinner gauge stuff from a metal supplier.

I don’t plan to move from my current house for quite a while, so although I know it’s going to be a beast, I’ll probably proceed since this material was significantly cheaper than buying thinner gauge stuff from a metal supplier.

Small amount of progress. I’ve never had to cut steel before and man, it is LOUD. Hoping to get all the cuts done this weekend and then get to work on the welding. I figured I’ll keep posting progress shots up here in case anyone is interested in the progress shots or sees this down the road and is curious. 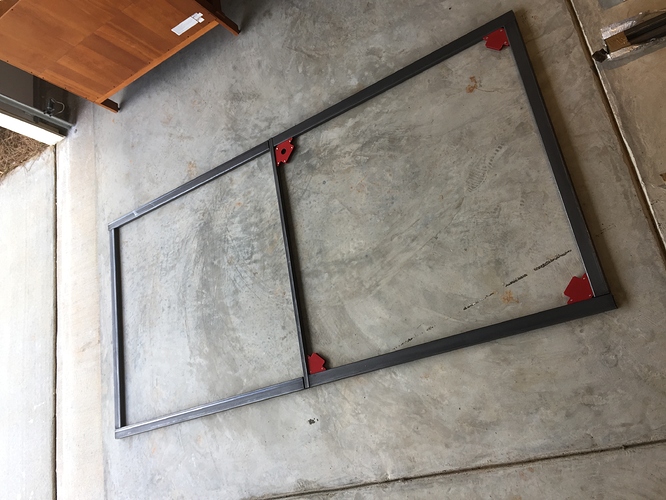 Most the cutting finished on the frame. I haven’t cut the angled supports at this point because I’m trying to see if they are necessary to help keep the final weight down by a bit. I figured I can always add them if necessary. Hopefully can get it all welded up tomorrow and put on casters. 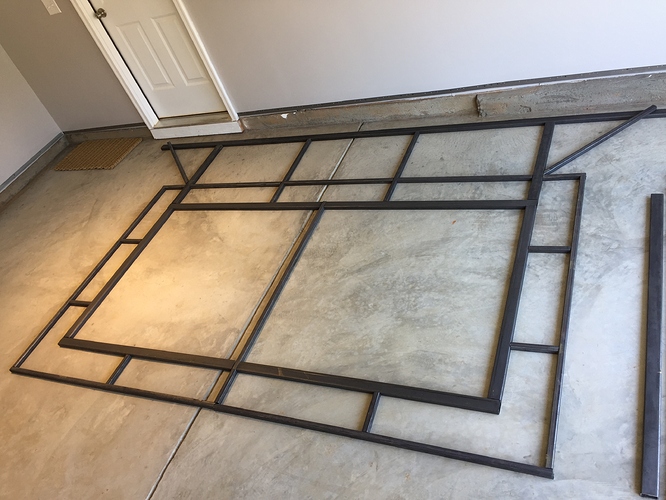 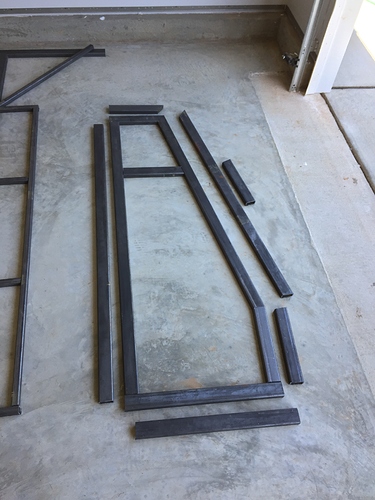 Wow so cool to see it come together so quickly! It looks awesome and I think you will have a very rigid frame.