The maslow measures out the chain by having you set the motor so that one of the
teeth of the sprocket is pointing straight up, it then rotates the motor to fed
out a known amount of chain.

In addition to this length, there is some other distance from the chain to the
center of the bit. This number is what you have to enter into ground control.

This isn’t the distance from the bit to the ring as the machine would have no
way of knowing how far it is from the inner surface of the ring up to the chain
that it measured out.

This distance needs to be from the center of the bit to the chain. The only
question is if this distance is to the first pin in the chain or to where the
first sprocket tooth would fit (this is the 1/8" distance I mentioned above)

I have been avoiding digging into the code but, I would imagine that the machine is essentially measuring position based on the 3 triangle sides (motor distance and each chain) If any of these measurements are off, it is going to come up with the wrong position.

New Question: How important is the CG of the new sled? I realized that was something that I did not re-measure with this redesign. I was assuming it would not be as critical since the sled allowed to rotate freely.

I think that the radius in GC is just an extension of the chain length to the router bit.

correct. this would be the larger triangles in your diagram.

New Question: How important is the CG of the new sled? I realized that was something that I did not re-measure with this redesign. I was assuming it would not be as critical since the sled allowed to rotate freely.

The CG should not matter as the sled can rotate and the sled’s rotation does not change the position of the bit.

Got it! I was totally off base then! Thank you for the clarification.
Dang, my bad. I didn’t realize that Maslow measured it’s own chain like that. That’s brilliant.

I plan to trap 1.5 chain links and use the natural joint in the as the pivot.

I didn’t realize that the measurement he was trying to find was the extra distance added to the end of the chains. For some reason I thought he was trying to treat the triangular shape as a quadrilateral (by calling it a “pivot”).

In my feeble defense my confusion spurred from the idea that when the roller lags or jumps there is a temporary “pivot point” in that side of the triangle and I believe that pivot point is where the roller meets the ring, not where the chain meets the bracket. But I see now how that doesn’t matter at all. Sorry guys!

I have been avoiding digging into the code but, I would imagine that the machine is essentially measuring position based on the 3 triangle sides (motor distance and each chain) If any of these measurements are off, it is going to come up with the wrong position.

Yes. I’m an idiot. I totally misunderstood the question and gave a dumb answer. I’m sorry about that. I see the light now and totally agree with you.

Pivot was a poor choice and you were correct. Unless something is wrong, the chain should not pivot in the machine but remain inline with my adapter. I was more concerned with the attachment method and not effecting the chains function. I changed the method of attachment when I came across the steel link designs.

Thanks for the feedback. I am going to keep testing.

I got some samples back for the carriages that attach the sled to the ring. I haven’t done much testing yet, but I’ll report back once I have. 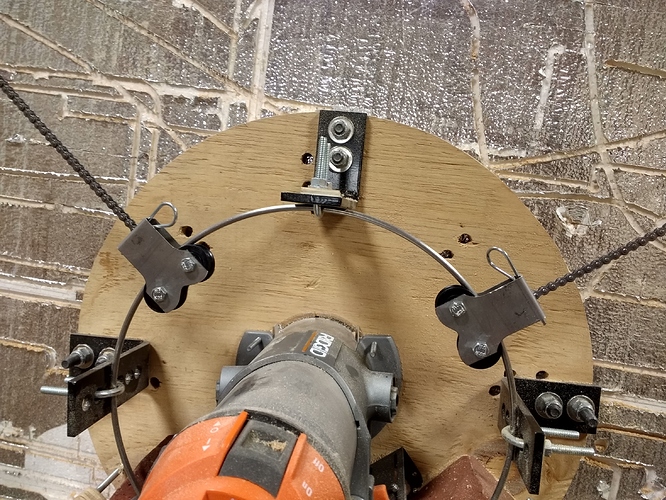 I like the look of that @bar. I think that having two bearings for each chain should mitigate some of the jerkiness that has been discussed earlier. I was planning on doing a similar setup.

Well, I got some testing in last night. As normally happens, it is the simple things that get you. My motor to motor spacing was about 30 mm off after the calibration routine when measured with the tape. I manually updated this and began seeing much better results.

I solved most of the vibration issues by changing the bit to the 1/4 spiral and increasing the angle of the table slghtly.

I got the test square within 0.2 inches of square before calling it a night. I believe this is mostly just needs more tweaking with the measurements.

Running the cross cut across the top have me a 0.4 difference across 60 inches in a downward arc. This suggest that the motors are still further apart (I think)

Is the best method for calibration just moving these values until they produce nominal results? 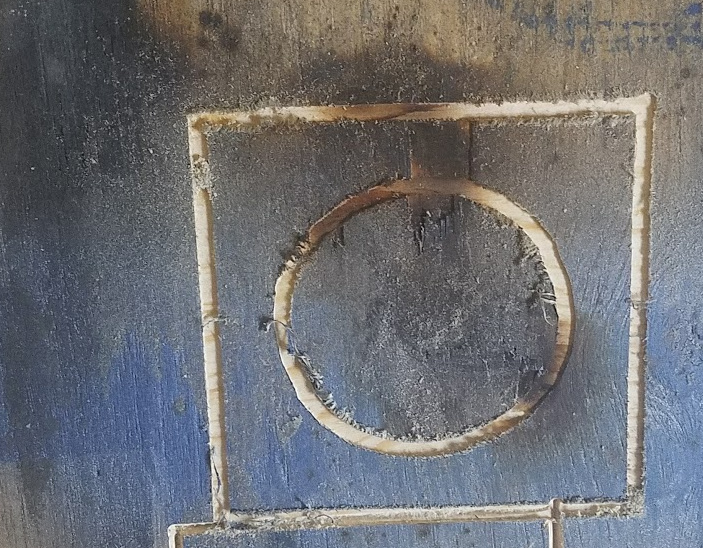 I had this problem and found that the motor arms were being pulled together by the chains. I put a horizontal bar between them to hold them firmly in position. Measure with the tape during the calibration step before and after releasing the chains.
Your frame looks pretty beefy, but it might be worth a look.

I saw Bar on Friday. He provided me a half circle bar he wanted to test, with the double bearing trolley. The hardest thing about set up was making sure the ring was round. As a 1/2 circle it wants to relax. This is where placement of the L brackets was key. I had to flex the bar ends together to get it to fit round and maintain a equal distance from the bit in all directions. The only issure is with the casting of the bearing guides on the bar, there is a small lip that need to be sanded off to make a smooth path for the bearing to ride on the bar. This is where the only jerking was when it ran up against the “speed bump”.

It was cutting very accurate. I ran it around the board for fit and did not run up against the chains/brackets. I cut a sign out that had carving to it and it turned out great. the boarder is .25 in all the way around.

I need to do some circle testing. I was able to take the sled and tip it while cutting and it stayed on line. The bit stays centered. That is the key to this working and the most difficult. I had to adjust a few times to get perfectly centered. 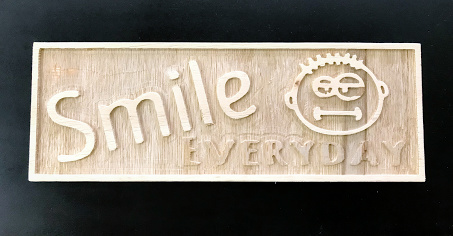 Those are very impressive results.

I would be really interested in seeing a picture of the final set-up.

Is there somewhere that has a flow diagram or procedure for tuning in the cutting accuracy? What method did you use or were the initial measurements close enough?

In the Ground Control set up, you have to enter the exact measurement from the end of the chain to the bit. If you are off, you will have some oval issues, so play with the measurement until it works. I was lucky and measured it in a couple tries. I will take a photo of the sled and post later.

Here is the photo. 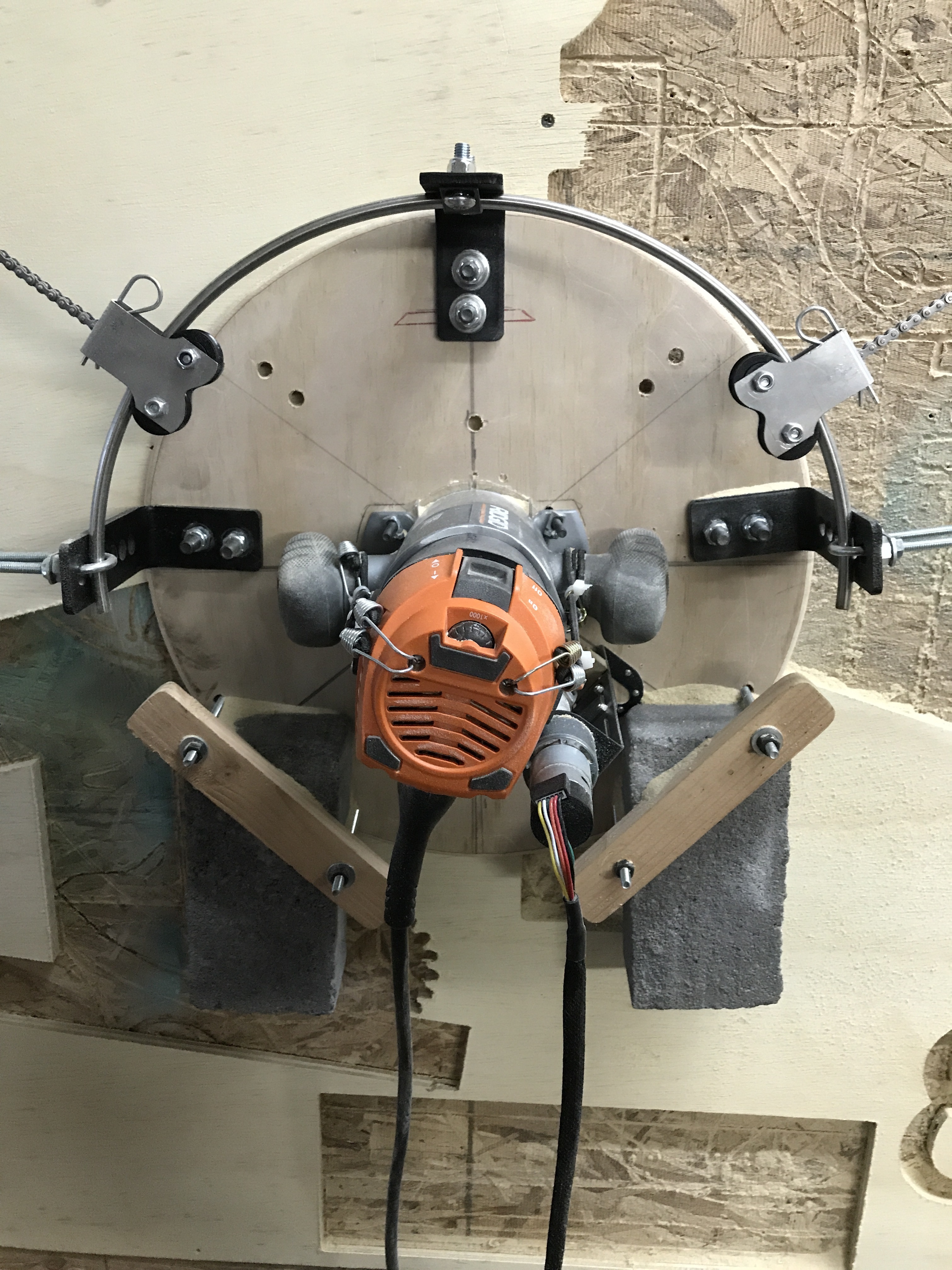 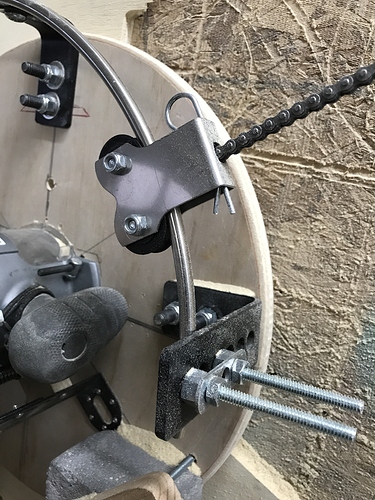 That’s looking really good! Now I’ve just got to get this house put together so I can make mine look that nice

That looks super good! Is the ring stainless? Has anyone given this design a solid stress test? 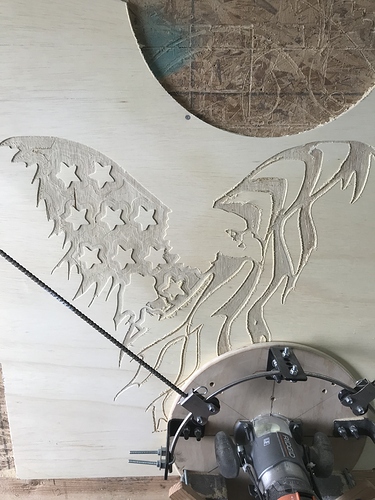 Has this design tack progressed far enough along to create a (prelim) Bill of Materials on the Wiki?

I haven’t done any precision cutting and verifying yet. Just some fun projects. I would like to cut a known shape in severL area of the board first. @Gero had one in beta test that cut several squares over the sheet then returned to center each cut. I would like to do this and measure results still.

I was able to cut some the other day. I set up 4 inch circles in the extreme edges and corners as well as the center area. To my surprise, the things measured 4.016 to 4.022. even in the upper center about an inch down. The only problem in the extreme edge area was deformation from the dual bearing hitting the bracket holding the ring. Mine is using a 1/2 ring. I would like to switch and use a 3/4 ring to make sure there is ample space for the bearings to travel without contact.