According to “About the No Judgement category”, it’s for ‘anonymous or “intimidated” users’. I’m definitely not one of those any more, but I decided to post this here because it’s one of those “way out there” ideas that probably doesn’t have much promise. I originally thought I would prototype this idea before reporting it to the group, but I’m not sure when/if I will get to it, so I really need to get it out of my head and onto the forums.

So the concept is to put a more rigid connection between the sprocket and the sled. The way I thought of doing this is to tension the chain using a beam, kind of like a bow. This pre-tensioning would reduce the catenary sag of the chain. In theory, it might improve the accuracy of the machine. Edit: Also, because you can push on a bow, it would eliminate the control issue in the lower corners. 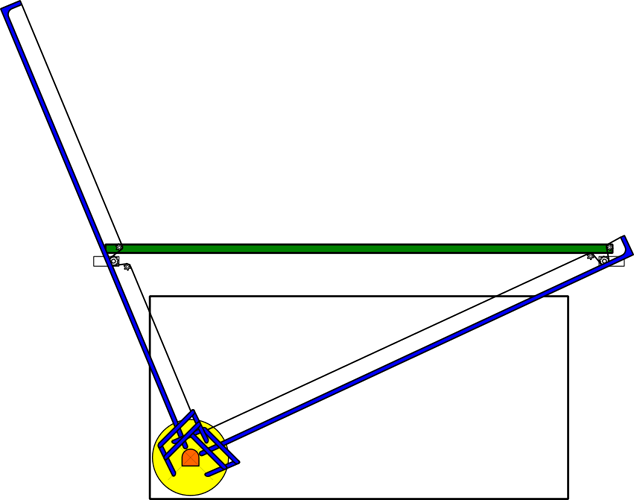 The other challenge is that a rigid connector means that there will be a long piece sticking out when the sled is pulled near to one of the motors. It is certainly not a concept for a tight space!

So feel free to throw rocks, suggest improvements, prototype, whatever. This idea now belongs to the community.

please post a sketch/diagram showing what you are suggesting. I don’t understand
it from your description.

seems like just making the sled heavier would be more practical.

It sounds like you’re talking about using a rack and pinion mechanism instead a sprocket and chain. Am I understanding you correctly?

Yes and no. Still using a sprocket and chain, but with the chain held in tension by a long rod, so it behaves more like a rack and pinion. I owe the group some figures, but we had guests this weekend, so not much tice for drawing. Coming soon…

I edited my initial post to include the diagrams it so desperately needed. I also added a comment about the most important feature about this concept: it would eliminate the problem with the lower corners, because you can push on a stick, whereas you can’t push on a chain.

Thanks, @dlang, @aluminumwelder, @talyrath for your comments. @aluminumwelder, My concept wouldn’t involve spring steel. It sounds like your vision of what I was trying to convey is a concept of its own!

First thought is that the angular force introduced by the chain bars would cause the sled to deflect sideways and upwards. If you were at the center top of the cutting area, the counterweight of the chain bars could theoretically pop the sled up off the spoil board entirely. 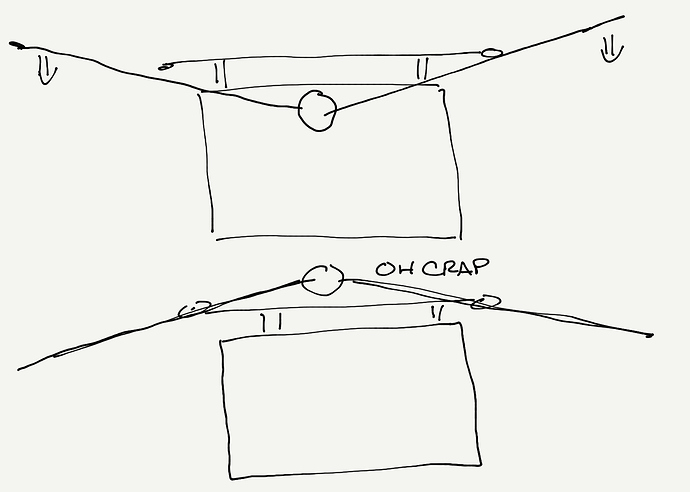 Good point. I’m thinking about this failure mode and at first I thought there’s not a good path from the top figure to the bottom “oh crap” figure. But now I see a path, which starts with the sled lifting off the work surface, swinging out and up and then in and up. Adding a little weight to the sled might be the solution to that.

what would these arms be made out of? I assume a light ridgd material like aluminum or carbon fiber. Another thread discussed the Optimum motor distance and height. a 14’ ft top motor bar in theory gave a cutting force about 3x greater than the stock maslow. It was pointed out some people dont’ have space for a 14’ wide top beam.

This design would require about 24’ of length. Interesting, but I think unpractical.

I would expect that there would be more problems with needing a 17’ or higher
cealing more than the width.

would be a lot more practical for a 4x4’ cnc format or smaller, that way the arms would not be so long.

That’s an interesting idea - It got me thinking, do they make large versions of reel tape measures? The push force doesn’t have to be all that great, just enough to overcome the friction of the sled. I have no idea what that mechanical action is called.
I suppose the challenge then would be ‘driving’ the ‘tape’. Since it winds up in a reel, there’d be too much slop if you used the axle of the reel as the actuator. Maybe rubber wheels on the ‘tape’ itself.

they make them much bigger than we need

the tape/chains are under tension from the weight of the sled, so they don’t
push the sled, the machine releases tension on the chains and gravity pulls the
sled down.

tension on the tape/chains would be from ~3 pounds to ~66 pounds with the stock
motors.

Having played with tape measures before, the biggest issue would be getting a good grip on the tape. If it slips, even a little, your cuts won’t be accurate. If you had a camera with enough resolution, you could use that to read the tape.

I wouldn’t to grip the tape, I’d mount the spool to the motor. but that is
wandering off from the archer maslow varient.

Challenge there is that your driving wheel now has a variable radius, so one turn at full extension will move the sled a different amount than one turn when the tape is fully retracted.

Which isn’t a big deal from the software side, but it raises questions about precision and repeatability, especially in a process that covers everything in sawdust.

the nice thing about the stock maslow design is that gravity works in your
favor, the router is by definition lower than the chains, so very little sawdust
gets on them.

It is a valid question to test.

I… Haven’t noticed that to be the case. My unit is getting sawdust EVERYWHERE right now, including enough to gunk up the chains.

If sawdust is getting everywhere, you need more dust collection. Any small particle, even non-carcinogenic, isn’t good to breathe.

I’m pretty sure that the glue used in plywood is pretty darn carcinogenic, even if the wood is not.

Dust collection is on the list, it’s just a pretty big damn list at the moment. (My machine is still pretty new.) Until then, I’m in a well ventilated area and wearing a dust mask.