Z axis only moving the router some of the time

I finished my build yesterday and the first 2 cuts were great. After that my z axis started giving me problems. I am using the recommended rigid router. The motor is spinning the threaded rod for the height adjustment but the bit does not move. Sometimes it works and sometimes it just spins while doing nothing. Am I missing something with the Depth Interlock Lever or the Depth Interlock Lever Tab (The Orange Button)?

thanks for the link!

added it, and the manufacturer’s page to the Ridgid 22002 Router wiki page.

@paulinus, i’ve had that problem too. You’re right about the orange button, it follows the threads and will be damaged if the router body doesn’t slide with it. In my case, my z-axis ran away when I was testing some software, and ran into the end stop. The orange button sacrifices itself

They are not expensive, I bought a couple so I would be ‘ready for next time’…

@blurfl Could you post a link so we can purchase said unintentional sacrificial buttons?

Best to search for ‘Ridgid 513396001‘ and look through the many results. Pick a vendor and contact them, ask if the parts are in stock, what the lead time is, and how much they charge for shipping. I found that few had them in stock, some would order them from the vendor same day and some wanted to wait for their ‘next regular order’, and shipping charges might be way more than the parts.
I found a helpful guy here who was willing to call a couple other branches and found two in stock. The part cost $0.70 each, shipping was $5.95. I went for it - I was out of action and really wanted those parts! He did get them shipped that same day.

Thanks for the reply! I have taken it apart and found the sacrificed section of the orange button. I have 3 more coming in the mail. With all the backers buying this router I am sure this won’t be the only time this comes up.

You could try to carve a bit of a thread back into the edge of the damaged button. I was able to use a Dremel tool to shape mine enough to use it until the replacements arrived. It’s hard to sit idle with a shiny new toy and not be able to use it!

Maybe Bar and Hannah should stock them in the store

besides, I’d rather they spend time on the software and machines rather than on shipping

This older thread really helped me I had a similar problem.

For future folks just make sure the router bit is long enough to actually make the cuts you need, also the Ridgid Router recommended can at max do a cut of 2".

You can find the parts on this site: https://www.ereplacementparts.com/
search for:

Thanks for finding a source and part numbers! What did they nick you for shipping?

They look like a good source for most if those other tool and appliance parts in the waiting to be fixed box. I know I’ve got several damaged power cords (a 15A Milwaukee circular saw makes nice clean cuts on it’s cord), bad switches, etc to fix so many of you do too. Maybe fix the washer and quit using the now frozen rocks and stream out back, and gain a few points with the SO for some more router bits and plywood

So, I seem to have destroyed my depth interlock lever and instead of replacing it with the little orange plastic button again I am thinking of just ordering a square ACME nut and inserting it into the metal lever. I was wondering if I am overlooking anything here? Certainly if you over shoot this could damage the router base or the lift screw.

The orange piece is a ‘sacrificial link’ - if you make it stronger, the next weakest item will break. At $2-$3 a shot, changing out the orange link is what I’ve chosen to do (I’ve destroyed two…). That and keep a closer eye on things when the machine is running.

Yep, I figured that was the main reason. Still doesn’t solve the slop issue where the metal nut might.

Maybe this has been discussed before but having some soft coded limits for the z axis might be a good add at some point. Sure, it only helps if you properly zero the axis prior to using it but I assume most folks do that.

Thanks for the quick reply.

Alright. Finally got back to address my issues on the z-axis. I believe my main issues were the router itself, I got one from the bottom of the QA heap.

I had the bungie cord with preload on there router but I was still experiencing issues. In the end I think the bungie was hurting the performance, I needed something I could more accurately reproduce over and over. More on that later.

In the end I did a couple things that really have made it rock solid. First thing I did was check to see how much I was losing to “slop” then figure out where that slop was coming from. So I used the z axis function in GC to first move the router up about 1/4" then in increments of 1/32 I nudged the router down until it actually started moving down. Then I did the reverse, nudge it until it started moving up. It ended up being an average of about 3/32 of “loss” in each change of direction. That starts stacking up and led to me never being able to get through a 1/2" peice of wood.

So, seeing this I looked for the source of the “loss”. I had 2 issues, the threaded shaft had up and down play in it and the router lock tab would actually twist before applying the force to move the router up and down.

To fix the shaft play, I removed the e-clip and took a look at the shadt and the bearing surfaces. Because the router isn’t expected to used in this kind of configuration the steel threaded shaft just rides on the surface of the magnesium router base. There is a very slight ridge that I believe was supposed to hold the threads up off the router but I can’t see this lasting long. To remedy this I took a washer with the right thickness, drilled it out to fit around the shaft and placed it between the threads and the router base. This took out all of the up down shaft play. Success!

The router lock tab was a little more difficult. It is clear that we could bore out that lock tab and place a flange nut inside the tab itself however, that removes the mechanical fuse of the orange spring tab. The main issue we have is the twist due to the small load bearing areas made of a soft metal. I already had signs of wear on my locking tab.

The solution I came up with was pretty simple and still allows me to get plenty of Z travel to get through a 3/4" sheet of plywood. For this I included some pictures to explain the modification. It keeps the orange mechanical fuse and costs about $2.

While I was doing this I spent some time with a red Scotch Brite pad to polish up the inside of the router base. I noticed a slight flaw in the casting, in the anti-rotation groove about halfway down there was a ridge that looked a but like a parting line. I could see it was catching because it was nice and shiny unlike the rest of the groove. A little work with a thin file and I was able to flatten the whole slot down. No more catching! As a finishing touch I took 3 strips of 0.010 UHMW tape and put them on the router body and wiped the inside of the router base with Slipit (great stuff BTW, I am using it on my linkage kit as well).

The final step was to apply a consistent but repeatable amount of preload on the router. I left the 2 router handle bolts on place and then used #64 rubber bands hooked to a 3 inch S ring (stole that idea from someone else. In the end 2 rubber bands per side is more than. Enough to get repeatable, smooth, no lost motion, z-axis goodness.

Sorry for the length of my post, just thought it would be good to explain all the changes and to mention that it seems the variation in the quality of the router base may have made it much more difficult for me to get repeatable results. 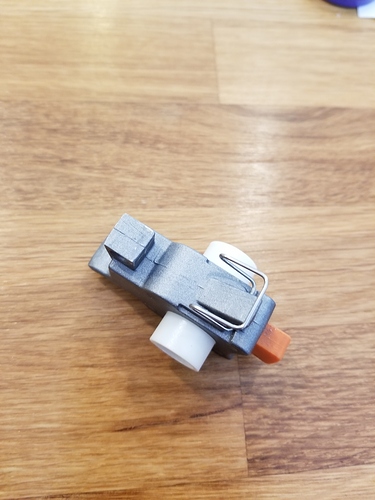 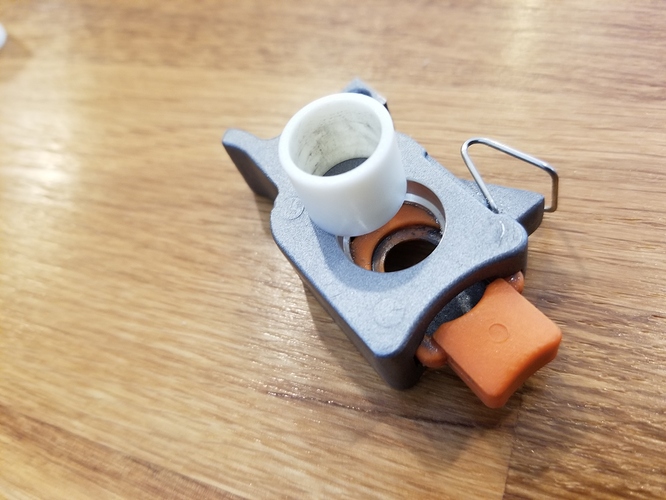 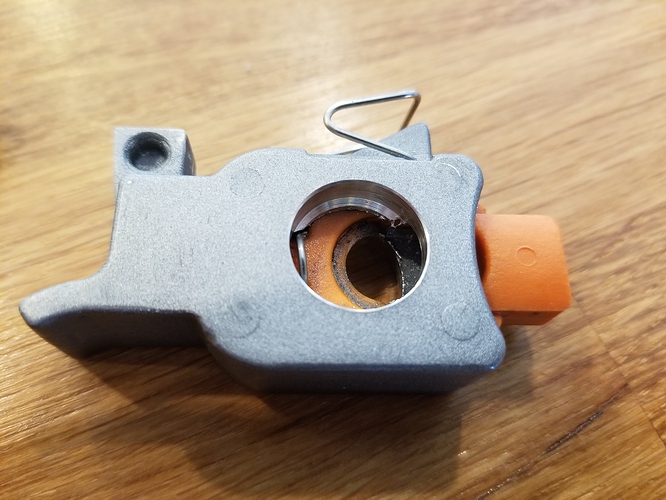 That’s a great mod to the traveling router locking tab! Do you remember what size the bushings are? Thanks for the very clear pictures.

The bushings are Hillman brand from Lowe’s. They 5/8 OD x 1/2 ID x 1/2 L. I took 0.05 off the length because I was worried about travel. You probably don’t need to. Used a step drill to go down just enough to leave that ledge for them to sit on, I went a little at a time to confirm the orange button would keep working properly. Then I roughed up the outside a little and epoxied them into place. It really helps and I no longer have the issue where the locking tab let’s go and slams into the peice I am cutting. Always an oh s**t moment…

Perhaps we can look into limit switches? I haven’t had time to get in depth on anything, but people are making amazing mods. Limit switches are easy to implement, assuming we have a spare aux input or two (It could certainly be done with just one).

@arnoldcp nice work on tracking down and eliminating the slop. I haven’t had a chance to play with my z-axis enough to see if there is any slop that will cause problems, but if I find a problem, I am sure I will be coming back to this post.

I think the hardware limit switches would be foolproof however, if in the GC interface we already have, for the z axis we could add a define upper limit and lower limit. Just like we define zero. Then GC would simply halt at a value higher than the upper or lower limit. Ideally giving the user some feedback.

Also, I did not mention it but I have come with a simple way to make all my bits (I only have 3) have the same zero. Making the soft limit potentially more attractive. I am using nylon clamp on shaft collar at a fixed point. Drill a hole through a piece of scrap wood of a specific thickness, push the router bit into the hole, cutting side into the hole until it bottoms out, clamp the shaft collar on and it is set for the same zero as your other bits.