A new way to think about frame size and angle

I took my time to think about the optimum frame size and angle. I think that the optimum can be found, when looking at the cutting force that the maslow can provide at every position of the working area. So I made an analysis of how to calculate this value. See the attachments.

I uploaded an overview of the procedure I am using:
analysis.pdf (539.9 KB)

And the matlab code to calculate the values:
analysis_maslowcnc.m (4.4 KB)

Before I want to do a more thorough analysis, I just wanted to know what you are thinking. If I’m on the right track, or if I missed something?

there is this spreadsheet that lets you try various dimensions, it doesn’t account for the frame angle (changes would be welcome)

so you have two limits

The friction (both static and dynamic) is constant across the work area as long as the chains are parallel to the workpiece (and this ‘constant’ varies based on the surface it’s riding on, including the amount of tear-out from the current cut). Static friction matters because most CAM programs have the sled stop moving when you plunge into the workpiece.

All of the above varies by the frame angle, the closer to vertical, the better the numbers are (lower friction, more gravity available)

but the closer you get to vertical, the less force there is to let you drive the bit into the workpiece (but we don’t know how much force is needed, and that will vary on the bit and wood in use)

In the spreadsheet I don’t try to figure out the friction and plunge force needed, I just take the ‘make these numbers better than stock and your machine will perform better’ approach.

I believe that you come to similar conclusions, with pretty graphs, with a lot more effort, because you map out the entire space and the spreadsheet is just calculating the trouble spots.

There is an earlier tool ( http://lang.hm/maslow/v-plotter.py ) that does a more primitive version of the full map, which helped identify the spots to test.

without these two values, I don’t see how to modify either the spreadsheet you your mathlab work to do anything better than guidance as we can’t predict the actual results.

We could find the friction number by having someone with a high-speed camera measuring the acceleration of the sled from gravity (get a well-chewed workpiece, hold the sled with only one chain near the bottom corner, let go and measure it’s acceleration)

FWW - If all Maslow CNCs were the same this could be true.

<> All Maslows are created equal

I really like the work. What I like most is that it is an attempt to explicitly state the performance attributes (minimum available force) which drive a decision for frame geometry. In order to really get this right, all the potential constraints would have to be considered.

I think @dlang did a good job discussing a number of other potential limiting factors.

It is not clear to me that minimum available force is what constrains the Maslow. Here a few other performance attributes which may be constraining:

What I like is: if you create a script/model/function which can take the frame geometry as inputs, and calculate these you can quickly analyze a frame design.

My recommendation is to just be as meticulous as is reasonable, to include all the performance attributes and parameters. That way you will be more likely to create something that is broadly applicable.

We have work in place to account for chain sag and stretch (it was developed as
part of the holey calibration work and has been at least partly ported and
merged into the main tree, but there hasn’t been a release yet that includes it)

So what is the current recommendation? It seems like 12’ distance between motors and 30" above top of work canvas area with a sled of 20-25 lbs and angle of 10-15 degrees is best current compromise? between top center and low corner performance.

That is my recommendation. However, that is not based on the rigorous analysis mentioned in this thread. I actually am not aware of all the historic work that was done to determine the optimal frame-angle. I can say that a 10’ top beam will be limited in the bottom corners of the worksheet. The top-center of the worksheet experiences quite a bit of chain-stretch; the kinematics equations become stiff, which makes calibration difficult. I think the 30" number is very good. Also, the 20-25 lb sled weight is very good.

the real question is will making the frame even bigger say 14’ wide and 40" from top of work piece be even better, but then we start to run into mundane issues like many ceilings are only 8’ tall and 14’ is taking up a lot of room in my garage. The larger the work piece becomes the more “even” the force measurements become over a 4x8’ surface area.

take a look at the spreadsheet (I’m pretty sure it’s linked to earlier), try
different parameters.

right now it seems that the 12’ 30" is around the sweet spot for machine
dimensions, as you go wider you have more trouble reaching to the far side, even
as it improves the near side.

There has not been a real test on frame angle and sled weights, this is mostly
“it worked for Bar before he started the kickstarter”. There have been a few
tests, if you go too close to vertical, to far from vertical, or too heavy on
the sled, we know there are problems

we know that we are closer to the limit in terms of tilting back, 20 degrees
doesn’t work while 10 degrees does (the last testing had problems with a 5
degree tilt)

we have not had anyone do any testing since we added chain sag to the
kinematics, so I suspect that we handle lighter sleds and closer to vertical
angles better than we used to. But until someone gets a chance to do some
testing, it’s hard to be sure.

the real question is will making the frame even bigger say 14’ wide and 40" from top of work piece be even better,

Yeah. This is a good question. For me, I think that as long as you increase the two dimensions at a similar ratio, you’ll end up with an improved machine.

If you just keep increasing the beam-length, you’ll eventually run into issues related to the weight of the chain, slow dynamics of the chain, chain-stretch, or frame rigidity. I don’t know at what point those issues become prominent, maybe a 20’ top-beam. To my knowledge, nobody has ever made a machine so big that its size became a problem.

I know i should be quiet when the grown-ups are talking. Just can’t help it. i know the .py script is just giving rough guidance and after re-framing to 11.5 ft again believe in a ratio in scale of a sheet.

Is it true that there is an optimum ratio between width and hight of the frame? No Judgement

And I did (feeling a bit stupid now) None of this is claimed to be true. Just some random outcome of spending time being wasted, without the feeling of wasting time. [TrueOrNot-v2] No 1 is the guy that bought a lighthouse and the Maslow. He thought: ‘The wider and higher the better? I don’t have width, but height! My frame will have the ratio 1:1.’ He ended up with a frame 3.65 m (~11.98 ft) in hight and width to fit his plywood in the ‘comfort zone’ of the py script. (Yes, he could have …

That doesn’t make any sense. Something must’ve gone wrong in the comparison. 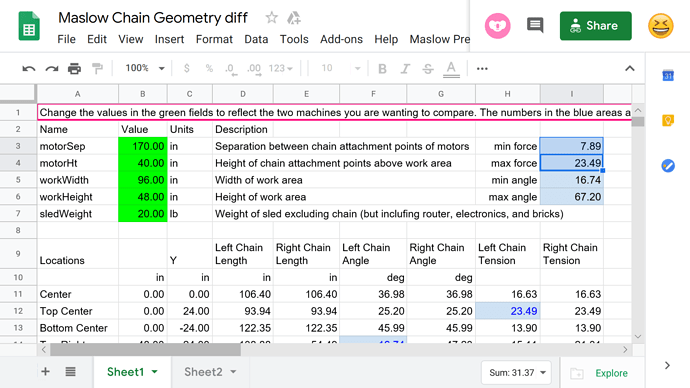 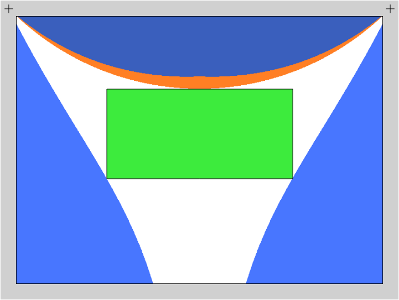 In this sample image the green rectangle is about 48x96", the distance between the motors is about double that or 196" and the height from top of rectangle to motors is about 40". Putting those numbers into the spread sheet gives min and max forces of about 10 and 26.5. a difference of about 16. Compare that to the “stock” set up which has a difference of about 30.5. the bigger the difference the more variability in the cutting forces.

On the other hand most people rarely cut out 8 ’ long parts and shifting the plywood towards the center is a lot easier to do.

I’ll point out that the constants in the v-plotter are not reliable, they were tweaked with the assumption that the stock dimensions were good (which we know is not the case now)

the problem isn’t the variability in the cutting force, but rather that:

if the peak force needed in the top center is too high, the motors won’t be able to operate there and the sled will fall behind (and droop, producing the ‘hook’ at the end.

If the minimum force available in the bottom corners is too low, the sled has trouble moving into the corners.

while garages are 20’ deep, most people don’t want to dedicate that much space. They also want a machine that’s short enough to fit through the door (or at least one that fits under the cealing)

we have quite a few people who haven’t had space in their workshop for a full 10’ top beam.

40" above the 48" workpiece, which is about 15-18" above the ground for almost 9’ of height. I don’t know about you, but I find that rather high to get up to for hooking up chains or measuring if the sprocket is really at 12 o’clock

That doesn’t make any sense. Something must’ve gone wrong in the comparison.

that’s why I show my work and link to the tools, so others can catch when I make a mistake

Yes I agree. The point I was making is the ideal frame size is too big for most to be practical.

If I’m looking for best overall accuracy, I’m gathering that right now the sweet spot is a 12’ distance between motors, 30” above top cutting surface, and a 10 degree angle is best? Dlang, thanks for all your insight on forum, it has helped me greatly.

12’ & 30" seems to be a decent compromise with counterweights and not bungees, but not sure if anyone has posted side by side results.