I just finished the bolt together frame, and realized that this is not the most recent frame or the recommended frame. However, it does go quick and is pretty sturdy with minor improvements. First, lets get to the pictures. 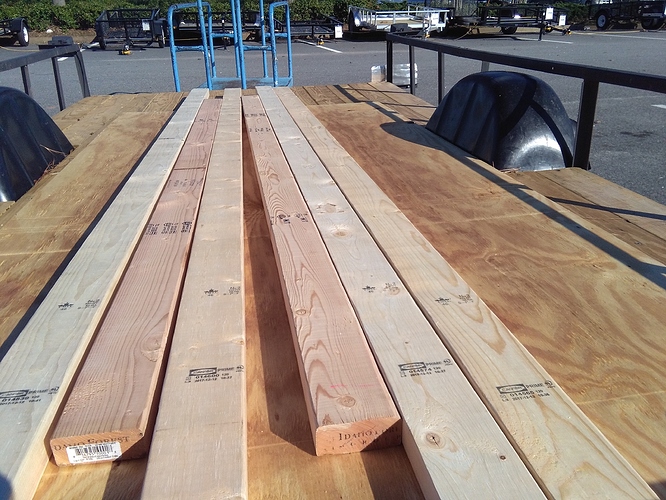 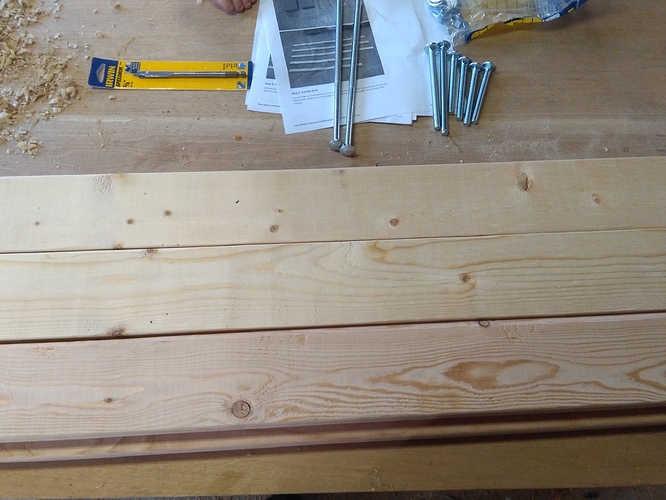 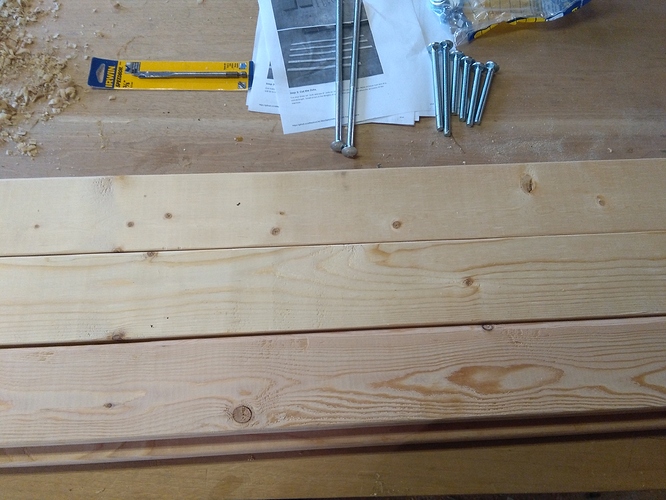 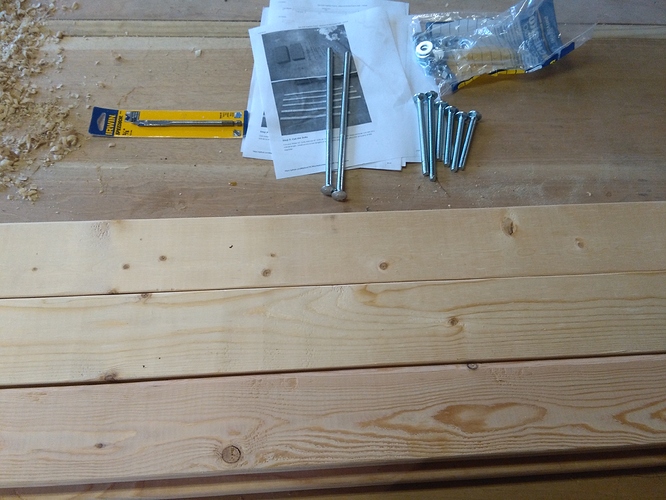 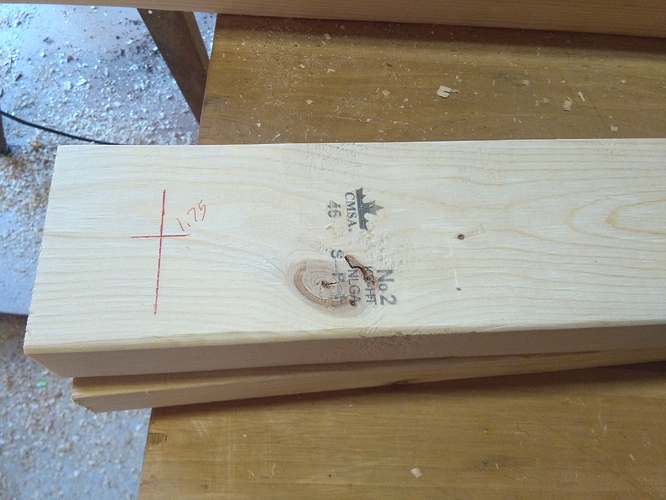 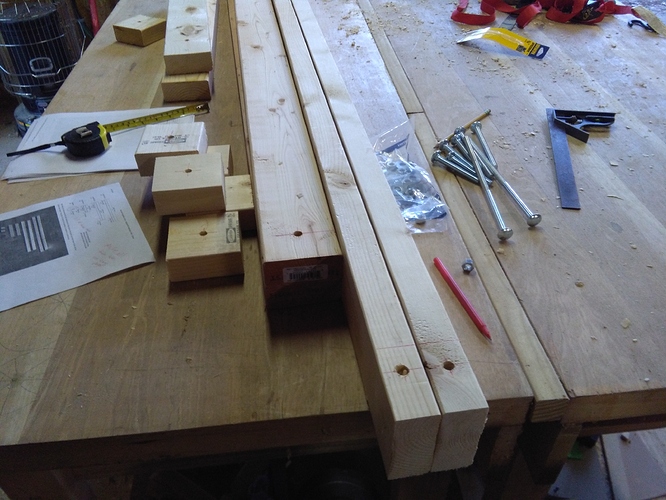 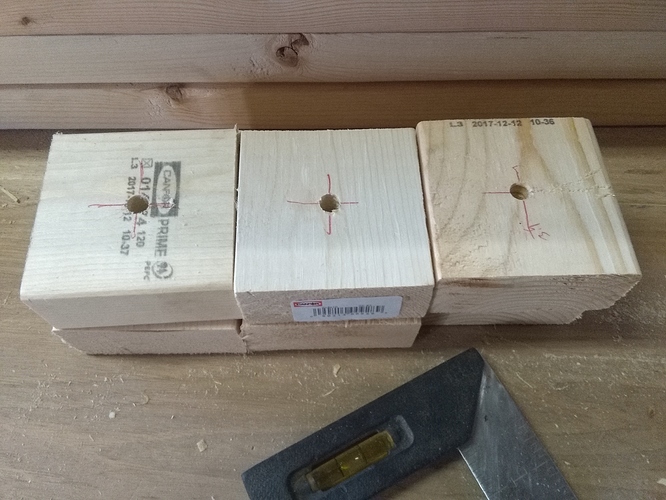 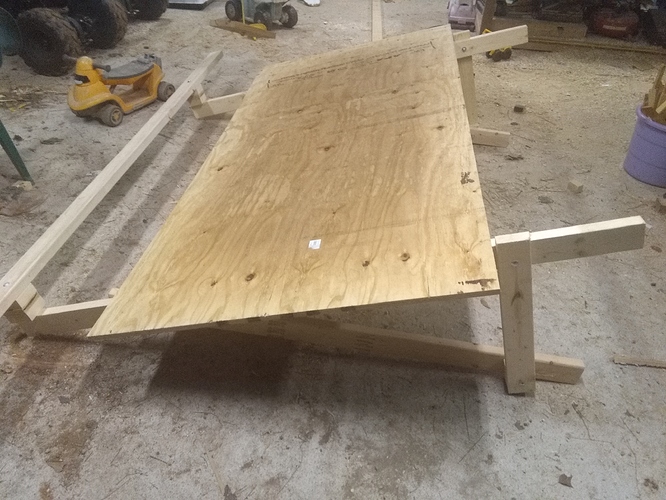 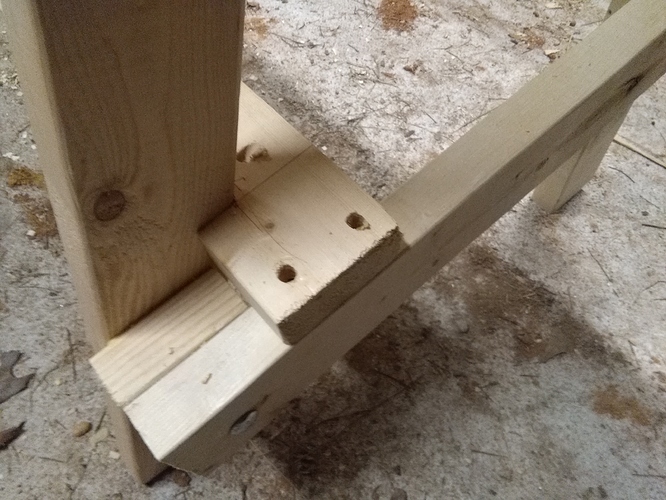 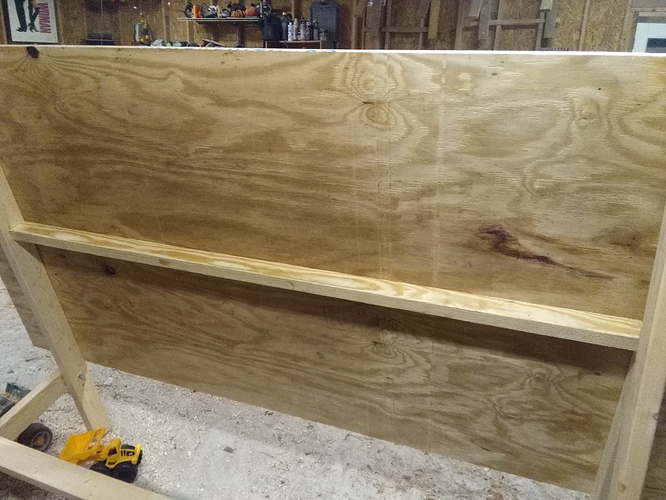 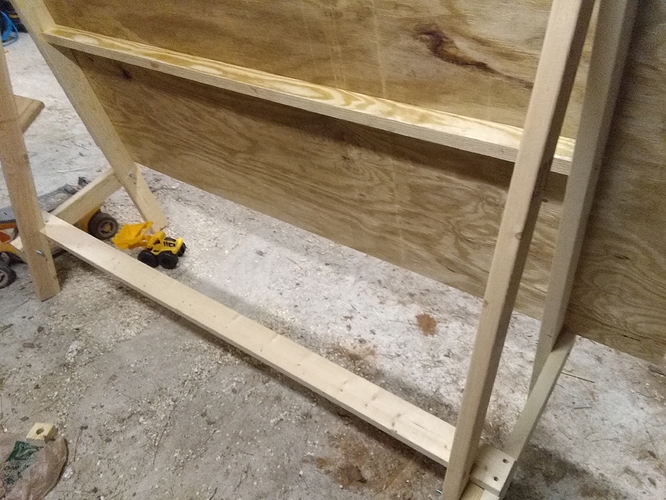 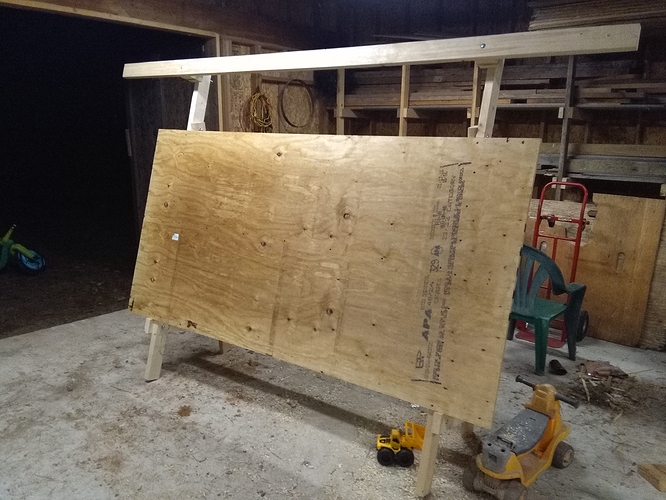 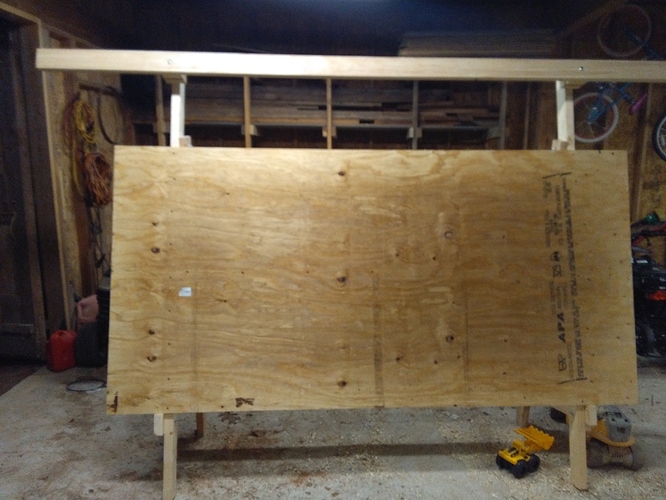 The plans were pretty easy to follow. I recommend the measurements be in 1/16 value for standard. Some measurements are 8.68" which can not be done on a tape measure. Second, the 3/4in plywood spacer threw me way off the plans. Third, the assembly for the legs was not clear. I used a later photo to set the boards in the right configuration. Fourth, I glued all the spacers together for a stronger bond. Fifth, the back of the legs need something to strengthen them up. I used a board to tie them together. Sixth, the plywood is not strong enough to tie it all together. I saw this was revised, and I added one board to strengthened it up. Adding one at top and bottom would fix this. Seventh, the legs rock. I will probably add a board across the bottom to correct this. Please note that I went will all 3/8 bolts. I don’t think it is worth the money to drop down to the 1/4 bolt. The 3/8 bolt is stronger and only about 20 cents more. Making all the holes the same size is easier. Also, if you have to buy the 1/4 drill bit then that will set you back $4. Overall, I loved the bolting idea. It tied the joints together for a solid bond. Let me know what you think, @bar !

I love your write up. I had questioned how the legs would come together. I believe this will help going forward.

I’ve spent some time last weekend making the bolted frame as well, everything is spawn and drilled, but i ran out of time (i.e. the kids woke from their nap) after i assembled the legs, so i can’t comment on the rigidity yet, but i thought they went together quite easily.
I did make the bolts for the top bar longer, so that i can add more spaces later, if i want to cut longer things.

@Sharpsburg_Woodworke, I have to ask. You used a 3/8-inch spade to drill through the edge of the 2x4, correct? Did you do it by hand and if so, how far off center (if any) did it come out the backside? I really struggled with the 1/2-inch bit I used when I tried to do it by hand:

So I ran the tests and here’s the executive summary. I find that both designs are incredibly strong. @bar’s design is immovable and with only three screws and without glue set up, I had to apply all the force I could to get a creak out of @dlang’s design. I think tomorrow after the glue dries, it will be immovable as well. I don’t know that glue is needed, I put all I had into it just to get the slightest of movement. There’s no way the sled will exert that much dynamic force onto the join…

Hopefully it’s just me that has problems.

It’s not the most recent and it’s not the recommended frame? I found out recently that the shop floor manager where I work would help me transport (and even cut to length) the 2X4s I’ll be needing. His pickup truck handles long 2X4s better than my Prius. Is there an official sanctioned new-and-improved frame that I should look at? I know there’s the mega-thread, but that’s quite the haystack.

I used a drill press with the spade bit. You could use a right angle that you clamp to the board to make sure you are straight. The main thing is take it slow and use something to make sure you stay at a 90 degree.

We need someone to make a new thread with the new frame idea. I thought this was the one. The only problem with this one is making to plywood more sturdy. Adding a few 2x4s will fix that.

I used a drill press as another try and it came out very well. The “make sure you stay at a 90 degree” was the challenge for me using a hand drill. Maybe it its the distortion of my progressive lenses, but I even tried to use a guide and it was cumbersome with the hand drill and came out just as poorly as previous attempts.

Someone suggested drilling through a CD and lining the reflection with the bit but I didn’t have one handy. This might be the best idea. I really think there should be some recommendation on how to drill through the edge that anyone can do to get a good result.

Might have mentioned this before, A long time ago I got a gadget called a portalign and permanently attached an old monky wards drill to it to drill right angled holes. Still use it. Similar to this.

Right, but I think one of the goals of the stock frame is to not require specialized tool(s) to construct it. that’s why the CD idea would be good… most everyone can find an old CD laying around.

If you use a regular drill bit then you can use a small block to keep it straight. But the spade bit tapers down and can not be kept straight once the end is in the wood. 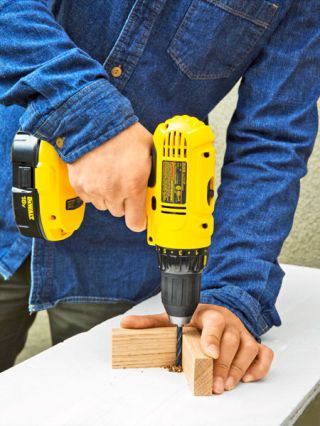 Check this out for the CD idea. https://www.popularmechanics.com/home/how-to-plans/how-to/gmp1534/3-tips-for-drilling-super-straight-holes/

Maybe include that link in the instructions. So people don’t try to just drill through by hand without an aid and expect a good result. I hate ruining perfectly good pieces of lumber.

The frame design has remained largely the same while the other parts of the machine have steadily improved. The community has made a number of different frame designs each with their own strengths and weaknesses. It’s time that we collected the improvements the community has made and re-designed the stock frame. The goals are: Simple to construct Uses low cost universally available materials Provides increased rigidity from the original design Let’s talk about features we like and designs el…

(warning, almost 900 posts there) and this thread
New * Basic * frame design - #32 by Bee where some more
discussion is taking place on the main part of the frame

and the consolodated instructions, with uncolored diagrams are in the wiki at
Home · MaslowCNC/Mechanics Wiki · GitHub (not linked from any
other pages yet)

@bar started a new page on the wiki showing some different frame designs, and he
was going to do a full build of the design above (with pictures each step of the
way), but he seems to have been distracted by other issues for the last week.

Unless Bar runs into some issues, we think this is going to be the recommended
frame when the new kits ship.

@dlang is right, I am working on a build of the frame he listed above which will become the default one, but I haven’t had a chance to finish the write up yet. I chose to do the write up for the bolt together first because I wanted a practice run for the final thing and it felt really easy to start.

The bolt together one has two major changes from the default one. The default one uses screws instead of bolts because there was concern about the ease of drilling holes and having the right drill bits and second the default one has more reinforcements in exactly the places you suggested

Thanks for sharing the build and feedback. I will try to work your suggestions into my write up for the default one. Keep in mind that you can always add a note to the directions or reword something which isn’t clear.

I didn’t know that I could edit that info. I highly recommend the bolts. A through bolt will never fail. If you use lock nuts or double up on the nuts then that joint will never fail. The bolts make those legs so rigid that it is perfect for this build. The only problem is to frame up behind the plywood. I ran out of wood so I couldn’t finish it last night. I’ll finish up and post more pictures later. I thought I would need to add a double header but the one board was solid as well. I would strongly discourage using screws over the bolts.

Here is the update. I three boards to stiffen up the plywood. I put a 45 to help give support to the top beam. I added a board to the bottom legs to help keep it from rocking back and forth. I added a board to connect the two legs together on the back. Overall this thing is solid now and it takes a lot to make it move. I may also double up the top beam to make it a little more rigid as well. I notice a small amount of flex. Here are the pictures. 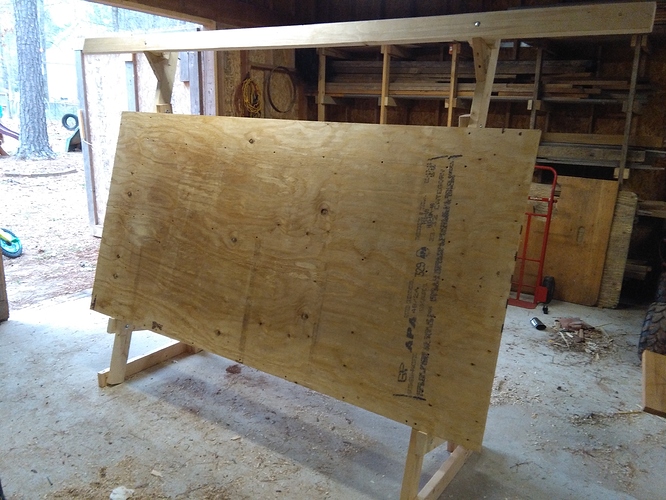 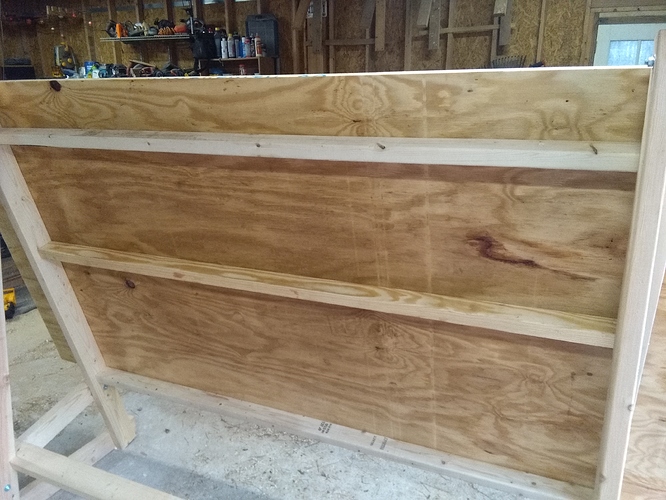 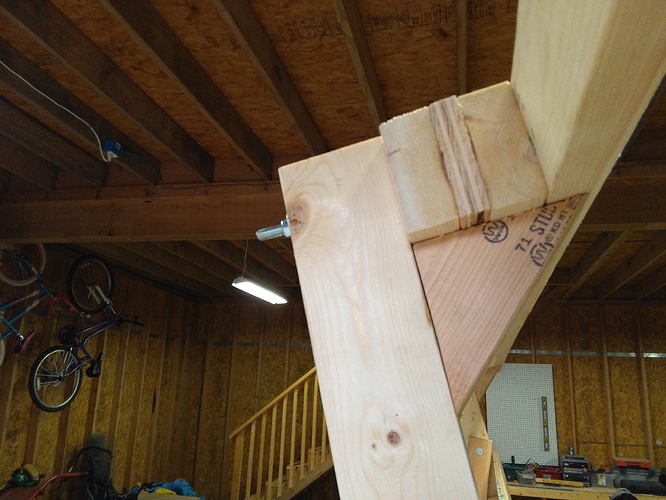 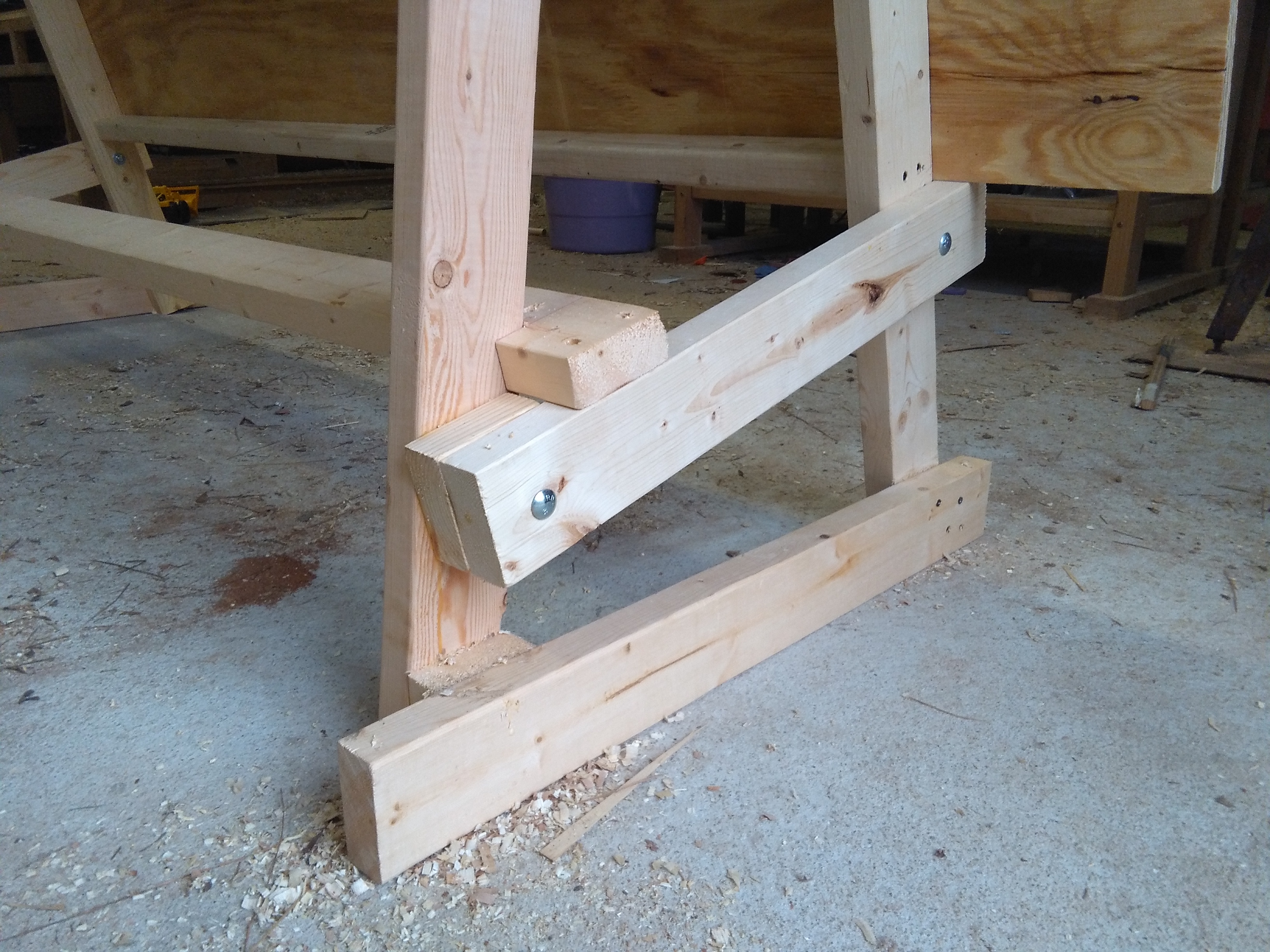 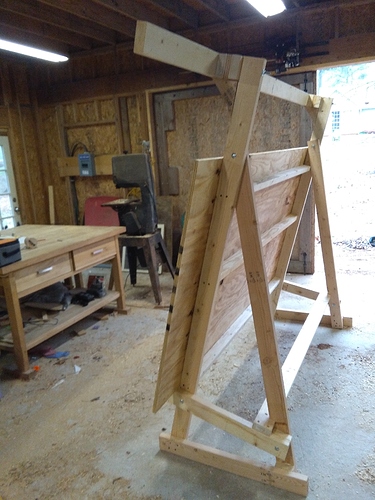 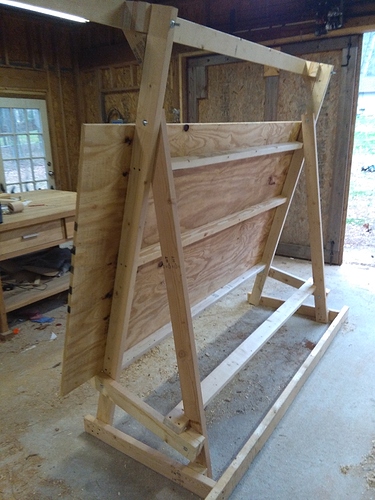 I like this build! Keep up the great work.

Just wanted to give a shoutout Big Thanks to @Sharpsburg_Woodworke. I’m just putting the finishing touches on @Bar’s bolt together frame and followed your modifications, with a few minor changes. I kicked out the rear legs to the outside, in order to bring the top cross beam flush with the top of the 4x8, this moves the spacer block to the top of the leg. I also used pocket screws from the back of the frame to hold down the 4x8, so no screw heads facing the router. 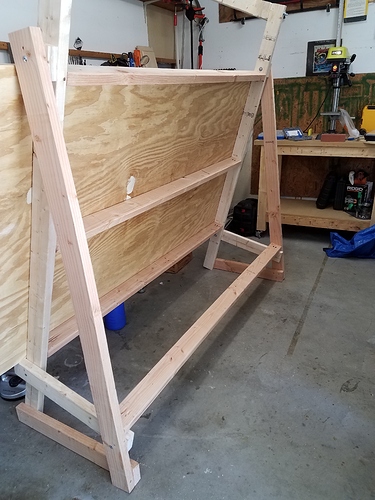 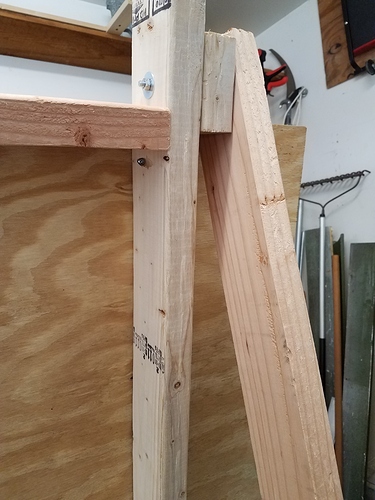 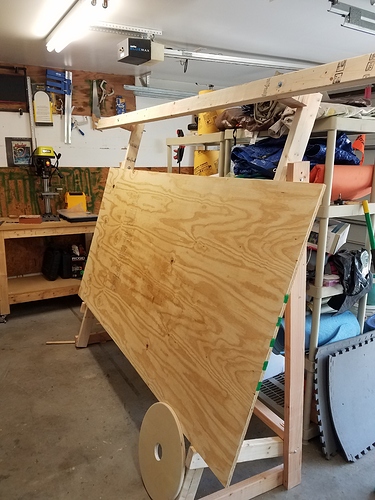