Hopefully I’ll get the chance to add some RGB LED’s to my Maslow, that would look slick!

I’m a detailer by trade, so I have an unfair amount of practice with CAD modeling and drawing. I made up that drawing template for my own fabrication services. It’s simply but it makes my drawings look very clean. My wife (who is a graphic designer) drew up the logo in Illustrator, which I imported it as a block and incorporated it into my title block.

Thank you for the files. I just got word that my new MP mini delta 3D printer will be shipping by Monday, but work and life has had me away this last week and I’m just now getting back to the forum.

I like the case, but was envisioning something slightly different.

My attempt was to more keep dust away from the boards than protect them. When not using the Maslow CNC, there will likely be other tools creating dust, and unless the fan is on all the time, dust will land inside. I wanted to create a box that was solid except for the port holes, with two dust filters (one on each side) and a fan over one of the filter openings to draw out heat. This would allow only filtered air into the case, with active cooling when it was turned on and a way to block dust sediment when it is off.

I was thinking of using fabric softener sheets over any vent holes/radiator. They are relatively cheap. Specially after you’ve used them in the dryer.

http://www.ebay.com/itm/80mm-Computer-PC-Dustproof-Cooler-Fan-Case-Cover-Dust-Filter-Mesh-5pcs-T1/252603775356
5 of these is $3 shipped. The foam filters are easy to remove and wash. Use thumb screws on them and it’s even easier.

I would have liked a more “mechanical” method but I did use zip ties and as long as you route them okay they do not interfere with the Adriano. 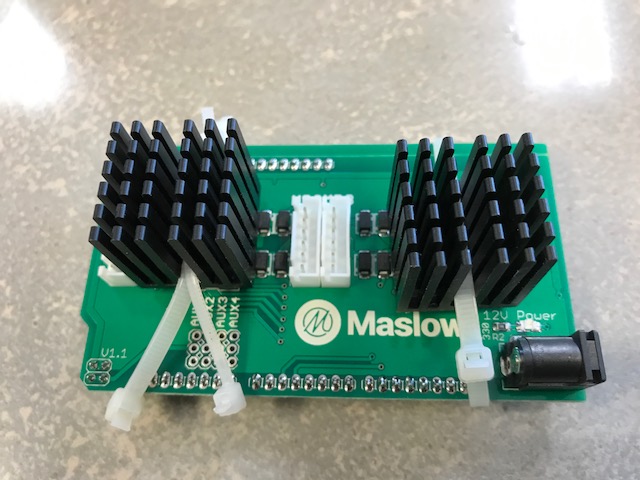 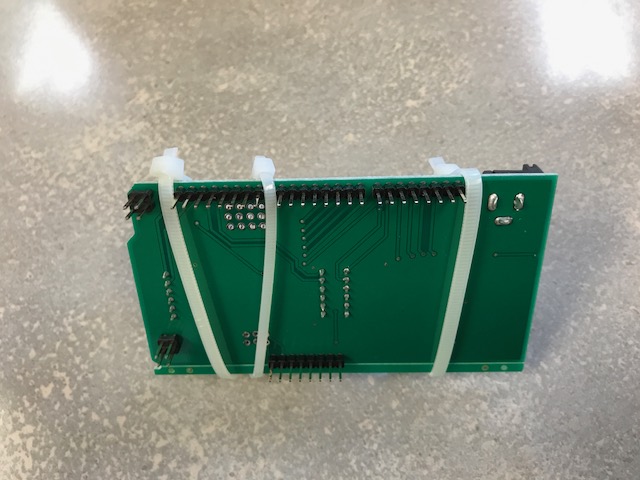 @TomTheWhittler If it looks silly and works it’s still a good idea!

Double sided sticky thermal tape should hold them in place extremely well. That was my plan atm. Since I doubt there’s room to mechanically secure them traditionally.

OTOH, if better heatsinks come along it’ll take a whole board replacement to use them.

@TomTheWhittler The more I delve into electronics, the more valuable I realize that zipties are!

@mooselake I may go with your artic silver epoxy if I have trouble with the heatsinks sticking. I use their thermal paste on my computers and it works fantastically! At 30 bucks each I’ll just get a new motor shield if I need to replace the heatsinks

How about a bead of silicone around the edge of the heatsink between it and the board? Should handle the heat okay as well as mechanically affix the heatsink to the board.

I wish there was a proper way to mechanically affix the heat sinks, but…

Are you cleaning the chips with rubbing alcohol, letting that dry for 3 to 5 minutes and then affixing the heat sinks? By pressing them firmly in place for 5 or more seconds.
If you just stuck them on without cleaning them first, and gingerly pressed them on. That very well could be the issue.
Are you using 3M or equivalent? If you’re using a cheap off brand I wouldn’t expect them to hold very well at all, but proper prep will still make a big difference in adhesion.

Quality brand and properly prepped application; and it can be a burden-ish to remove the heat sinks
3M Brand from AdaFruit 25mm x 25mm .95¢

Which is why I used the zip ties to hold the heat sinks down. I plan on adding a fan to the entire enclosure and when I did that to my un-zip-tied Protoneer CNC board one of the thermally taped heat sinks came off and shorted the driver circuit board. A big flash and a flaming board. Luckily those driver boards were removable and replaceable. I replaced the fried driver board and tie-wrapped the heat sinks down. No problem since. These MaslowCNC drivers are not replaceable except for the entire board so I am being extra careful.

I’m pretty new here but I haven’t seen this idea mentioned yet. What if a housing was designed for the boards that functioned to direct the airflow exactly where it’s needed as well as mechanically holding the heat sinks? I’m thinking about the old Mac towers with the plastic cowling inside that forced the airflow past the important bits instead of allowing the air to just blunder by in a turbulent mess.
I only just received my Maslow shield (still sealed in the bag!) and have yet to get a Mega so I don’t think I could design a finished product just yet but I envision a very simple box with a place for a fan and filter on the ends and a “lid” or cowling that angles down and touches the tops of the heatsinks. This would force the air through the heat sink fins and it would also hold the heat sinks in place if they decided to get squirrelly.

While this might be a lengthy (and complicated?) 3D print I think it would be an extremely simple laser cut box! I know most people don’t have laser cutters but once I design something that works well I’d be happy to cut them and send them to people for the cost of material + shipping! (Or produce them for Bar/Maslow proper) The glory of laser cut plywood is that it could be sent in a flat mailer to be assembled at home.

After failure ( I think) of one of my motor drivers, I’ve had a quick look at the datasheet and am wondering why the other package wasn’t chosen, as it has the heatsink tab ready for a bolted-on heatsink. I haven’t checked the power dissipation figures yet, as I have to find the motor datasheet), but using the SM package looks to be a bit dodgy thermally, as the thermal contact is on the bottom of the chip, not the top. There’s be more thermal resistance through the case to the heatsink that way. Are the chips mounted with thermal paste or tape underneath?

I removed the L298 from the PCB, decapped it and had a look. I think I found the problem, looks like a transistor overheated.

I’m waiting on some L298s from |China to replaced the blown one. I’ve also ordered several BOMs from Digikey and am going to have a go at building a shield with 3 L298s using the tabbed package and three bolt on heatsinks. Might be a week or three before I get to it though… 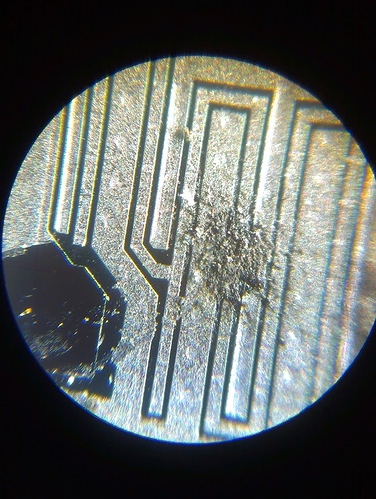 I ordered mine from Arrow. At that time they were cheaper then Digi and they were damn fast across the globe to Bahrain. The standing version was planed for a better heat diversion and I had planed to make a shield where I can measure the actual current drawn. The idea is skipped now, as the plan for a new shield enforces to have a single chip for each motor. Just did not have the time to look up what chip that would be. (suggestions?

I’m planning on using an L298 for each motor, and only use one of the two channels on each chip.