I found my heatsinks were falling off. I plan to adhere them with a heatsink plaster/glue to hold them on better. That said I felt the chips while it was running the calibration and they were just warm. I’m wondering how important the heat sinks are?

Also for future revision of the maslow boards you might consider the heat sinks that solder to the PCB. I’ve found for my projects the types of heatsinks are really nice since I can get by with small heat sinks and use the ground plane to help.

I’m wondering how important the heat sinks are?

That depends highly on the region you live and the temps in the room of your Maslow. Here in Bahrain the temps go above 50C~122F in the Summer. A few months back I burnt one chip, while the sled was climbing to high on the sheet and drawing to much amps. I agree that the double sided thermo tape is not ideal. I will go for the paste that is used for CPU coolers, plus I mounted the Mega in the airflow of the AC.
Edit to clarify: The math of the Amps is done on the shields. That mine burnt might have been a faulty chip. However, the forces at the top of the sheet are high and the motors have a tremendous torque. My Maslow thought is was somewhere down and tried to climb, when it was already at the top.

Mine is in the basement so it’s pretty cool year round. I also realized I am still using the temporary sled which is very light and likely keeping the loads low. That said if you have experience burning out one of the chips even with a heatsinks I will certainly make it a priority to get these adhered better. Thanks!

use E6000 glue on sides to hold them on better, you are right they fall off easy

Once i get mine, I am thinking of building a small enclosure, and am wondering what it might take to put a 5v PC fan on it.

Perhaps soldier on some wires and modify the code to run the fan when the motors are running. Anyone have any thoughts or progress on that?

There are nice raspberry pi enclosures that you can take ideas of
http://www.eleduino.com/Raspberry-Pi-3-Model-B-and-Raspberry-Pi-2-Model-B-black-Color-Acrylic-Case-with-Cooling-fan-p10500.html

I would run a 12 volt fan off the 12 volt power supply over the 5v because the 5v isn’t rated for that type of load, while the 12 volt supply is meant to run the motors.

Would someone please post a picture of the board and shield together, and one connected to the motors and z-axis? The dimensions as well? I think it would be easy to create a case that would be able to hold a small filter on one side and a fan blowing out on the other side, possibly two filters to keep dust out of both sides.

I wouldn’t run without the heat sinks; I’ve damaged three of the H-bridge chips over the course of the beta test even though I use them. Runaway software can ask the motors to do funny things. Along the same lines, be present and at least keep an eye on where the sled is - if it tries to climb to the sky, you’ll be there to stop it before the magic smoke gets out.

I’ve been working on an ABS enclosure for the arduino and shield (I’ve been refering to it as the PLC case) that incorperates a 80mm DC case fan into it. The plan is to attach something like this filter to the intake side and try to keep the dust out using positive case pressure. I think it may address some of these issues with cooling. The fan is just a surplus computer case fan I’ve had sitting around forever (literally was part of my first computer) that I cut the molex connector off and crimped it to a 12v 500mA dc power supply (once again, that I just had laying around). I will be plugging everything into a power strip that will also serve as the on/off switch for the Maslow. I tried printing last night but I wasn’t liking the way it was coming out to I canceled it. I will be trying again tonight, but it’s an 11 hour print so I won’t see a final product until Friday morning at the earliest. Will post results (in a separate thread) when I get them

@SPyKER I will try posting my solidworks model of the shield tonight when I get the chance, you should be able to pull your dimensions off of that. Alternatively, I could make up a quick drawing with dimensions on it and post that in PDF format for you. Alternatively, I can import it into Fusion360 into the folder that @mrfugu has been working on (I may do this anyways). If you also run Fusion, you could just use my models there.

@MeticulousMaynard go for it! I think it’ll be great to compile and organize different MaslowCNC parts options. Also if you could add your full frame model to the folder. Is your model built from different extruded ‘sketches’?

My 2D layout and the machine paths are generated from importing the All Parts.svg so it’s not that easy for me to build the 3d model from those sketches. I’ll stop there so I don’t hijack the Heatsink topic…

@SPyKER Sorry for the delay in responding, life got in the way last night.

I made up a quick set of drawings for this revision of the motor controller, please see below. I completely went for the overkill on dimensions, but that should give you most of the information you need. When mounted to the arduino mega cone the boards are 14mm tall (NOT including heatsinks)

I also have the IGES, STEP, and Solidworks files if you want the model. I can’t figure out how to share these on the forums. The file is also on the Fusion360 MaslowCNC cloud folder I previously mentioned. 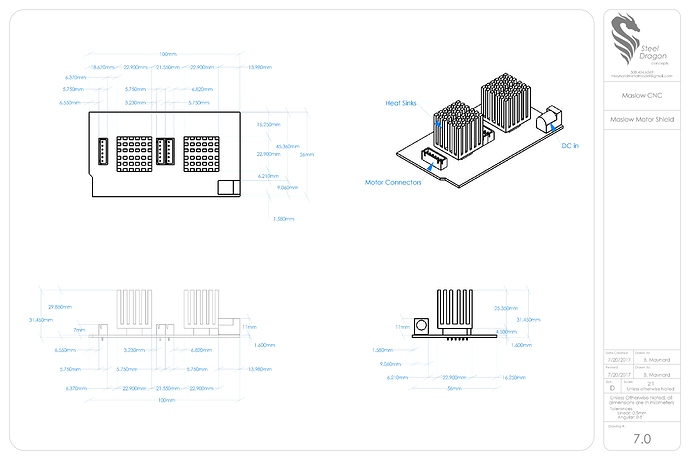 I have to add each file type to the “allowed” file type list. I just added .zip so we can share anything pretty easily.

Beautiful drawing! Thanks for sharing that!

@Bar Thank you! One of the first things I did when I get my kit aside from dance around excitedly was to grab my calipers and model the shield. It was the last part I needed to start printing an enclosure for the arduino. But more on that later, in a different thread.

Still having trouble with the upload, maybe the settings haven’t updated yet? I’ll give it some time and try again later.

They should be now

Excellent! Weird thing is, I tried the other files too, hence why I said the changes probably hadn’t updated? Not that I’m an expert in setting up forums

Ok once again I’m over doing it, but they make small liquid cooling blocks for Ardiuno and Pi’s. You really can’e beat liquid cooled and it’s pretty cheap.

Is there space on the board that would allow mounting holes to be drilled where the heat sinks mount?

Right that drawing is NICE. @MeticulousMaynard did you do it with Solidworks?

@iRoc999 Thanks! Yes, I did model that up in Solidworks. I’m trying to transition to Fusion360 but I’m still more comfortable in Solidworks. Also I drew up the model for my custom frame in Solidworks and I didn’t want to jump back and forth too much.

I’m no expert on PCB layout but there doesn’t seem to be a lot near the heatsinks. Could be entirely wrong. Liquid cooling sounds like overkill, but I do run my computers that way and I get great performance out of them.

Here’s the best picture I can find of my motor controller mounted in my enclosure, is this useful at all? 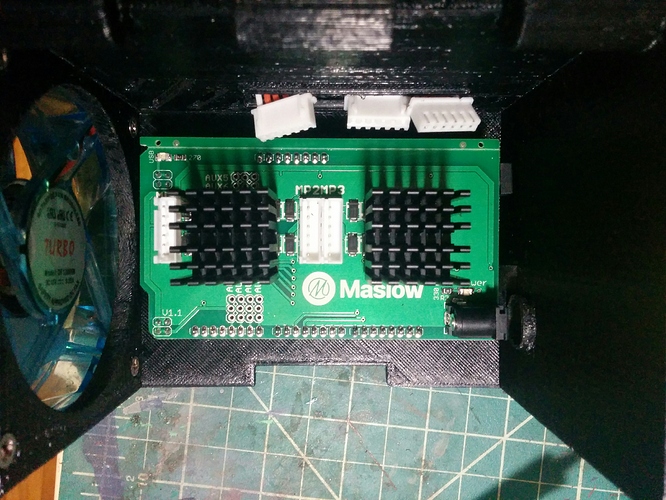 I would also like to figure out a way to mount heatsinks to the board mechanically. After reading this thread I would like to attach the heatsinks with CPU thermal paste to get better heat transfer. I do not want them falling off though

Oh man I envy you. I just need to go through my Solidworks tutorials again. I really want it to be my go to, Just not comfortable enough yet I guess. But DAMN that print out with your logo really got my motor running. Super Sexxxy

Like i said in another post recently I always take things to far. Built a water cooled Kodi box. threw some RGB leds on it and sold for too much money.