I just read the weekly update from bar, and I had some thoughts related to the calibration process. I would like to see some of these thoughts in implementation, but I understand that my knowledge and experience is quite limited when compared to most of those who will read this, so I won’t get too attached if the ideas aren’t too impactful.

First, it has been mentioned elsewhere, but the greatest limitation in the calibration procedure is the ability to accurately measure the length between cuts. I am envisioning myself trying to stretch a tape-measure across this machine, and attempt to read a number that is accurate to 1 mm. I am just not that good. One solution to this problem is to cut pieces out, from location you want to measure, at the length you want to measure. The pieces could lay side-by-side, and the difference between the length of the pieces would be very clear; likely more accurate than 1 mm. This would be easier than trying to measure a distance between cuts on the machine.

I understand that there are some reasons to not cut up a perfectly good piece of wood (I have some ideas to solve this as well, but will hold for now).

I was hoping to get some feedback. Is the idea clearly communicated? Does it seem valuable? What are reasons not to use this different approach?
Thanks,

how do you get a piece cut to the desired length? and how do you quantify the
difference between that length and the cuts on the plywood?

One option I was thinking about was to measure the workpiece (typically a 4x8 sheet of plywood) and try to do that as accurately as possible using a tape measure (you can at least use the clip to attach to the side and hold it in place). Then, use a set of calipers to measure the cuts to the edges of the workpiece and then subtract those measurements from the workpiece’s dimension to determine the distance between the cuts. Not sure if it really buys you anything doing it that way.

Another possibility is to have a short perpendicular cut on either end of the long cut to hook the tape to on one end and measure to on the other.

all we do is the short cuts to measure the distance, we don’t actually cut a
long grove in the material.
k

I see. The test pattern shown in the newsletter had 3 long horizontal cuts and 3 long vertical cuts. That’s what I had on my mind when I wrote that post. I’ve never actually seen the calibration pattern.

3 horizontal and 3 vertical measurements, they aren’t the cuts. you see the path
the router took, but you don’t see it’s Z axis.

stretch a tape-measure across this machine, and attempt to read a number that is accurate to 1 mm

Sticky tape is your friend on this. It also let’s you start from, say, the 10cm mark on the tapemeasure to avoid the inaccuracy of the hook on the end of the tapemeasure. I usually reduce the stickyness of the tape by sticking it to my sweater first, this makes it easier to move the tapemeasure for fine tuning.

Then, use a set of calipers to measure the cuts to the edges of the workpiece and then subtract those measurements from the workpiece’s dimension

I was going to try this but my calipers are 6-inches and the cuts are further in than that.

I keep thinking there is a way to create a calibration using relative lengths, rather than absolute lengths. For example, this could go like: cut a piece horizontally from the top, middle of the work-area; cut a piece horizontally from the bottom, middle of the work-area; lay them side by side; the top one is longer by 0.8 mm, known to a high-degree of precision; {unknown calculations}; output a highly accurate calibration.

In the example above, only two horizontal pieces were explained for brevity. It would make sense to cut pieces horizontally, vertically, and at various angles.

Note that even though the absolute length of the two pieces is only as accurate as your measurement capability (a tape measure), the difference between the lengths can be known to extraordinary precision. Think of this like: two pieces are cut about 3 foot long; one piece is precisely 0.8 mm longer than the other. Highly precise differences in length can be leveraged to produce a calibration. This way, two of the same part are the the same length, regardless of the location from which they are cut.

Although the {unknown calculations} part may seem like unachievable magic, I am pretty confident I could work through it, given some time. Unfortunately, time is currently very limiting.

I apologize that this is a very long, complicated post. It is a bit of a brain dump.

I haven’t followed the relevant discussion on how the new calibration works, and this might be along the same line as @Joshua’s post, but you can get a set of calipers pretty cheap and can get real accurate measurements across short distances (6 inches or less) using a cheap caliper. Is it possible to calibrate the machine based upon two cuts on the left side and two cuts on the right side, without measuring the distance between the left cuts and the right cuts like this: 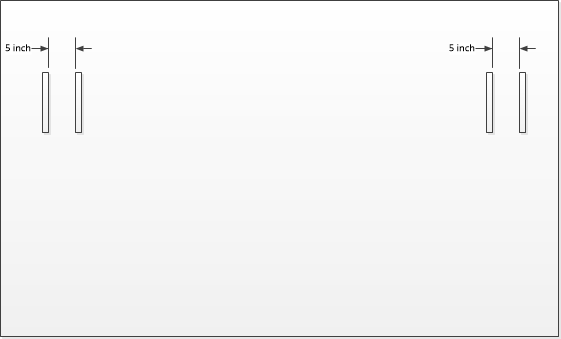 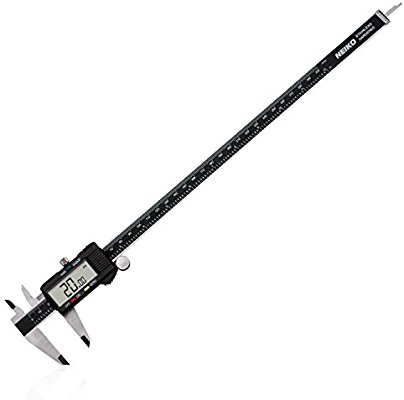 Well, if they had one that would go 72 inches or so and be cheap, that would help

I actually started to try to do the measurement as I talked about but the edge of the plywood board was damaged and I wondered if I could get an accurate measurement off it… then I realized my calipers were to short and gave up.

This is actually very much how the new triangular calibration algorithm works. The calibration process cuts out a pattern, but it doesn’t actually care how far apart the cuts are when cutting out the pattern. All it needs to know is how much chain was fed out by the motors, and what distance those chain lengths moved the sled (as measured by the user).

A couple concerns. First, the current calibration went through several iterations. The best results were found from measuring the longest distances possible, as well as by avoiding the top middle section of the work area (due to frame flex). Short cuts, measurable by a caliper, could be implemented easily in the code. But to achieve the same accuracy as 1mm error on the current calibration routine for a standard size Maslow you would need your measurements to be accurate to about 0.066mm for a 5 inch cut. This is possible for reasonably priced calipers by the spec sheets, but it’s hard to say if it would actually work in practice. Additionally, the cut width of the bit would need to be similarly measured as the bit diameter error would be included in the 0.066mm tolerance. And finally, over such a small distance the effects of chain sag may be overwhelmed by randomness of motion of the sled, say due to friction/slight variations in wood density/etc.

Not saying it wouldn’t work, but more of it needs further exploration!

The existing triangular calibration is based on defining two triangles that have
unknown components, with the difference between them being known.

That works great for figuring the rotation radius and Y offset.

But I haven’t been able to come up with anything that includes chain sag
compensation.

The best results were found from measuring the longest distances possible

This makes sense. The intent is to cut two long parts, as long as possible, of the same length, from different locations on the surface. Then, lay them side-by-side and use a caliper to measure the difference between their lengths.

There are two ways of doing the calibration

longer distances show the problems more, so the fact that you are measuring with less accuracy may still result in a more accurate machine.

This is the current process.

When working on the triangular calibration, we were talking about having both approaches and comparing them. The problem is that trying to measure chain sag requires that we compare things that are a long distance apart.

The proposal of two slots on each side isn’t going to help much, because the chain sag is not gong to differ much across 5 inches, it’s not much even across 6 feet.

If we can figure out a pattern that will show chain sag over a smallish distance, that would be a huge win.

Additionally, the cut width of the bit would need to be similarly measured as the bit diameter error would be included in the 0.066mm tolerance

Understood on other points and why its better to do larger distances than short distances, but you can measure the inside width of the cut or the outside width of the bit with a caliper. Just throwing it out there because as hard as I try, I wonder just how well I’m using my tape measure. My limit of accuracy is probably +/- 0.5mm. I can tell if its on a mm tick mark or between one… that’s about it.

[No built in emoji’s for someone with an aching back.]

Can you do a hybrid where you do one measurement up top for the chain sag and the rest, including those down low, with calipers?

If we can figure out a pattern that will show chain sag over a smallish distance, that would be a huge win.

100% agree. If we can figure this out then we can greatly simplify the calibration process.

This makes sense. The intent is to cut two long parts, as long as possible, of the same length, from different locations on the surface. Then, lay them side-by-side and use a caliper to measure the difference between their lengths.

This wouldn’t work with the addition of chain sag correction in triangular kinematics. For the current algorithm, if you made two cuts you would need to know the absolute lengths of each piece, not just the difference. Just the difference could, in theory, solve for either the rotation radius or the chain sag correction value, but not both. In theory with three cuts you could compare each, but I’m still not certain the math would work out. The problem was you wouldn’t know if the parts were 600mm long or 1600mm long, and that would affect the error ratio of rotation radius versus chain sag.

Can you do a hybrid where you do one measurement up top for the chain sag and the rest, including those down low, with calipers?

It really comes down to if we can see enough variation of chain sag to be useful. We see the most chain sag error at the bottom of the work area, but like @dlang said it’s still not much. At the top of the work area it’s even less. This is why the current algorithm uses the top cuts to determine the motor Y offset and the rotation radius and the lower cuts to determine the chain sag and sled vertical drift (how much the sled moved up/down when trying to move straight sideways).