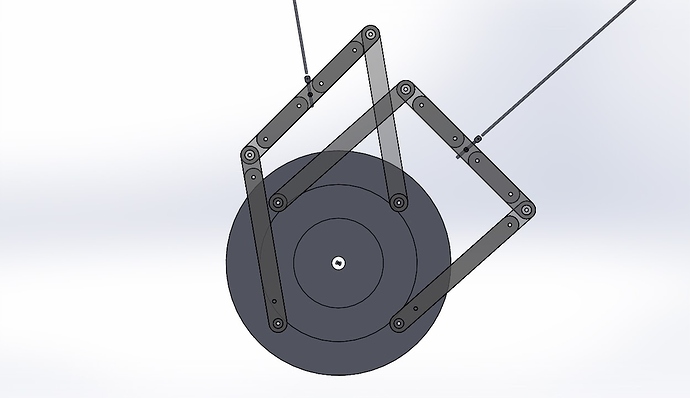 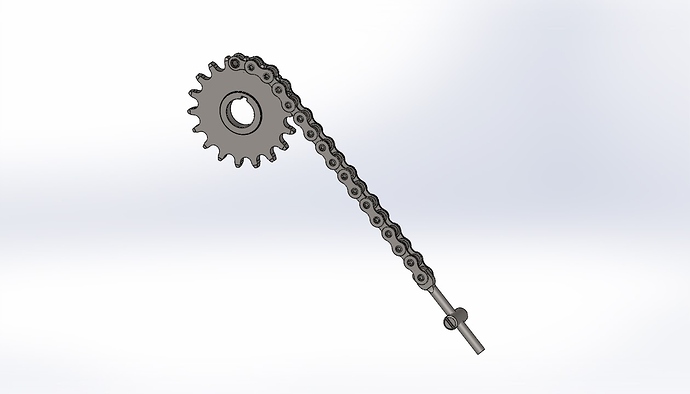 Kjede.JPG1260×721 45.1 KB
I sorted through the pile of crap i might use one day. when I found these adjustable eccentric locks. 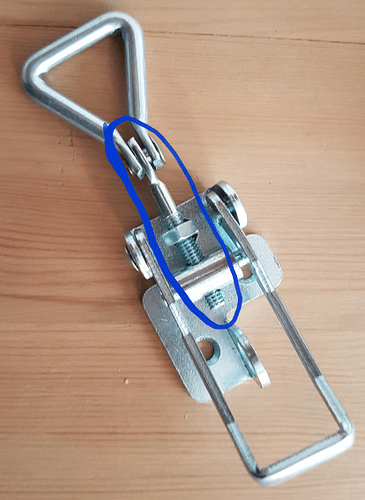 Looks like a hanger bolt. In the US, they’re not commonly available with metric thread, but they aren’t that hard to find.

Try a search for ‘spade bolt’. Most of the results look like they will need some change to the end to fit the chain. 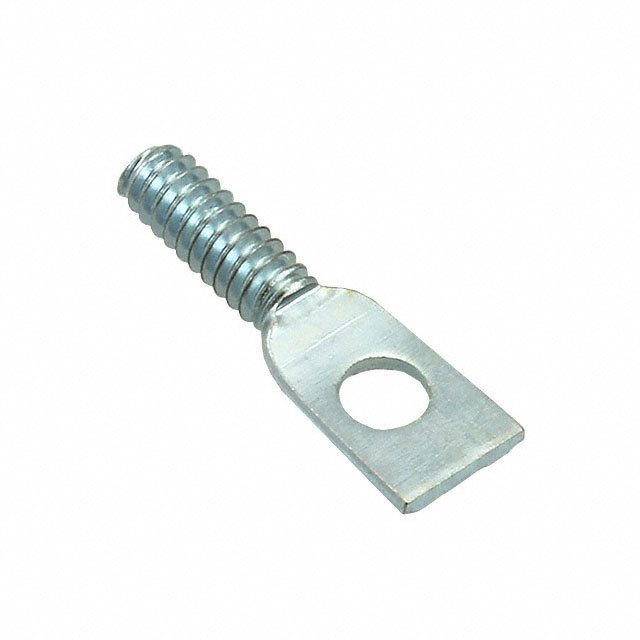 For what it’s worth the kits I’m selling come with chain attachment hardware. It’s a sort of wooden clevis. I know it sounds weak but I tested them and they hold more than 150 pounds each! That’s more than twice the force the motors are even capable of exerting!
At the time of testing I only had 150 (measurable) pounds available and they didn’t break with a full load. I have not broken one yet but I plan to do it eventually, I just need to be able to measure the force.

Of course if you’re making your own then you could probably bend your own metal “U” bracket… That’s what I did for prototyping. It was super easy but not really realistic from a production standpoint (for me).

I think it’s strange to buy linkage when it’s this type of product Maslow is designed to produce.
You are welcome to post photos and or models of your solution.

I love mcmaster.com it has 3D models of all the components they sell.

I think it’s strange to buy linkage when it’s this type of product Maslow is designed to produce.

I think the problem is accuracy in machining. From what I understand, if you have a stock Maslow it might be difficult to machine accurate linkages to solve the quadrilateral/triangular kinematics problem. Laser cutting the linkages provides increased accuracy and eases the challenge of designing such a thing for Maslow to cut. Not everyone has a laser cutter so I thought I could help out. I am in no way trying to deprive anyone from making their own linkages! The whole point of this is open-source and shared ideas! I would actually really like to see a Maslow-made linkage, I don’t know if it’s been done that way yet!

You are welcome to post photos and or models of your solution.

When I first replied I didn’t have any pictures of it, but now I do. 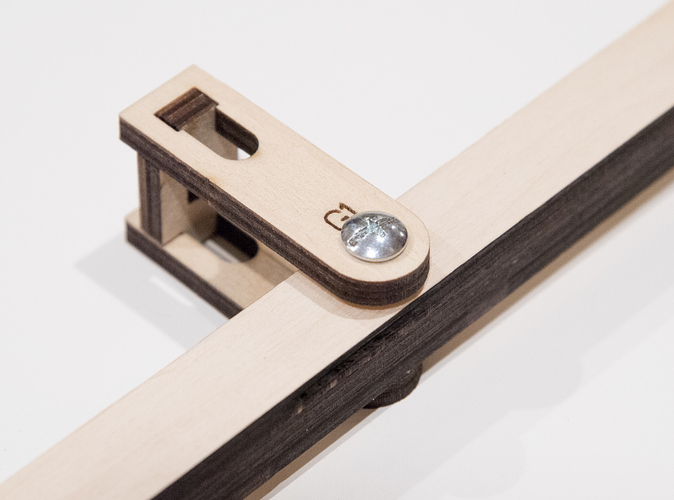 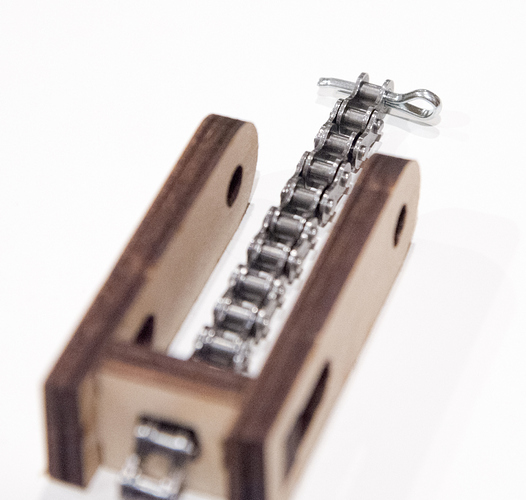 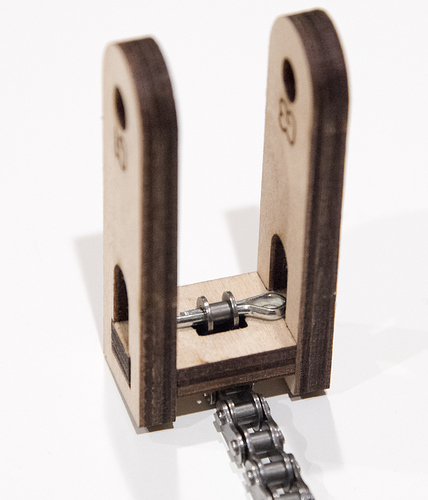 Are you planning on cutting your parts with your Maslow?
-Logan

Beautiful!!! Can’t wait for mine to come in!!

I can certainly see it with precision, if you are working the arms in the center of Maslow you should get pretty close.

Not everyone has a laser cutter so I thought I could help out.

I fully support you offering linkages it makes it easier and quicker to go. The more that test the design the better and seems to be priced at a reasonable level.

Are you planning on cutting your parts with your Maslow?

Don’t know when I get the opportunity to buy a Maslow. So the plan is to build my sled and linkages whit a standard wood router. Will try to post a how to thread when I come so far.

for the 45 degree pantograph, this is correct, but for the top pantograph, less
so. Even an inaccurate maslow is very repeatable, and the spacing between the
holes doesn’t really matter, what matters is the ability to repeatably drill in
the same place.

I think your argument holds true even for the 45° version. I’ve been saying the same thing all along. You are preaching to the choir. Actual hole spacing is arbitrary as long as there is room for the router and the spacing is consistent.
As has been suggested a few times, I’m sure if you cut a part then moved the work material and cut again in the same place you could produce identical parts.
Like I said, I’d love to see one made this way, I think it’s a fantastic way to do it if it works!

For making kits I believe a laser has some advantages. The laser makes far better use of material since my kerf is only fourteen thousandths of an inch. I can mark parts quickly with contrasting letters. I can cut tiny square holes (with no need for dog-boning). Cut time is faster. I get to cut stuff with light…which is pretty bad-ass.

Again, this is not an argument against Maslow or for a laser. The original question was why would anyone want a linkage kit if they have a Maslow, and I was simply explaining my reasoning for making the kit. It’s not an argument of right and wrong.

Looking at the linkages i can’t help but ask: What is the weakest link, and how strong should it be?

and THAT said… How to prevent the expensive and mission critical router from dropping on the floor. In case shit hits the fan.

I hope nothing will ever break, but that’s why I’m having these thoughts

I totally condone the idea of an intentional weakest link. Machines like lathes usually have a shear pin somewhere in the drive chain that is intended to fail before expensive things break…
At this point I have not been able to load the linkage to a breaking point. I’m sure I can break it, but I want to be able to measure the force at breaking, which has limited me thus far to ~75 pounds on the sled (which = 80lbs on each chain/linkage). So, armed with that information, I would say the current “weakest link” is the motor stall. The motors should stall out at around 66lbs of tension on a chain. Right now I think if you were to run both motors and try to pull the sled apart the motors would stall before anything physically broke (this could cause other problems like overheating of electronics). I haven’t tried it but that’s my theory.

I do still plan to break a linkage set, I’m just trying to figure out the best way to do it and how to measure it.

How to prevent the expensive and mission critical router from dropping on the floor. In case shit hits the fan.

the current “weakest link” is the motor stall

My experience would confirm this. The stall is followed by the need to replace the motor driver chip

. It would be good to avoid this, or to choose a driver that with a protected output.

Resetable fuses perhaps? One per motor.

Don’t the L298 drivers have a current sensing pin?

found my own answer here:
https://www.element14.com/community/thread/41528/l/l298-current-sensor-pin-convert-pulsed-current-signal-to-consumption-flag?displayFullThread=true

Maybe cheaper to find a driver with overcurrent protection on board… But now we have some insight on how that works.

Doesn’t part of calibration do a brief stall to measure inter-motor distance?

Not to push it off on the firmware people, but if you go for a preconfigured time without any encoder change it’s time to stop and throw a possibly recoverable error and stop trying to move the motor. Well, guess that does put it on them…

that could provide some extra protection for the drivers. And maybe also for the router.