Hello my name is Owen Reese, author of fbcadcam (a just for the fun of it freebasic.net project)
Recently I setup a Maslow in the Philippines.
I am new to CNC (cad / cam) in general…
I am new to MaslwoCNC
My goals are to assist the kids in the philippines by way of the fbcadcam forum. https://www.fbcadcam.net/forum/viewtopic.php?f=18&t=232
however I am quite happy to correspond in this forum as well but I am quite the newbie so I look forward to all your responses.

ps. i know it is crazy SLOW to plot a circle / arc by way of a series of lines and that i could use G2 and G3 for them, however since i would need to do this for ellipses and elliptical arcs anyway i figure might as well do it for circles and arcs to…

here is a link to pics of us setting up our first maslow
https://www.fbcadcam.net/forum/viewtopic.php?f=11&t=233

The idea is to add cam / gcode functionality to fbcadcam specific to maslow for now since it is the only cnc machine we have to test on. Eventually we hope to have other cnc machines to test with and further the cam / gcode concepts. Which reminds me to suggest some ideas about using two maslows simultaneously to manufacture / assemble large scale things on the front side and back side of the frame. This idea would require the frame to be vertical rather then tilted. An example would be something like the maslow in front places LED’s into the large scale pcb and the maslow in back would be doing the soldering.

I think the hanging chain structure will always require a angle of the frame to give the pressure on the tool.
I’m studying vertical systems and why traditional gantry cnc fail on vertical. Each one motor X/Y/Z.
I figured that in this size, there will always be a drag depending if the tool is up or down and i move left/right, or if the tool is left/right and i move up down. On horizontal machines standing on the ground it’s solved with more rigid structure/more weight/ high cost. To stay light and cheap for vertical, i will research in a 5 motor solution. 2 synced X motors/2 synced Y motor/1 Z. I like the idea of your mirrored vision.

Thanks for the pictures! Keep us up to date please!

Edit: Please tell Ichibane that it’s not “because the maslowcnc cant recognize the J,I and F codes”.
He seems to have uncovered a bug in GC with changes of ‘absolute positioning to relative positioning (G90/G91)’ in the g-code. While bCNC and Camotics have no issue with that, GC renders it a little strange 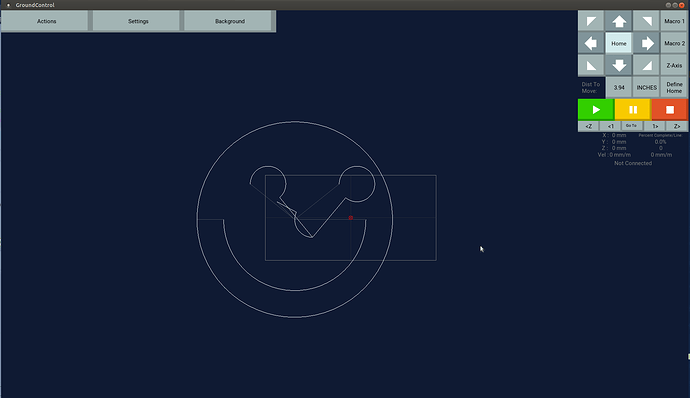 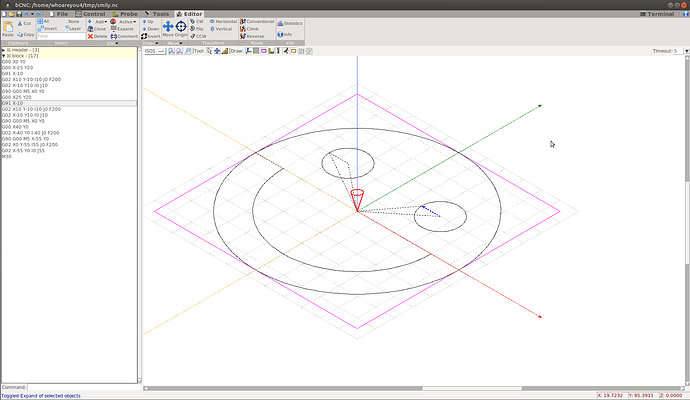 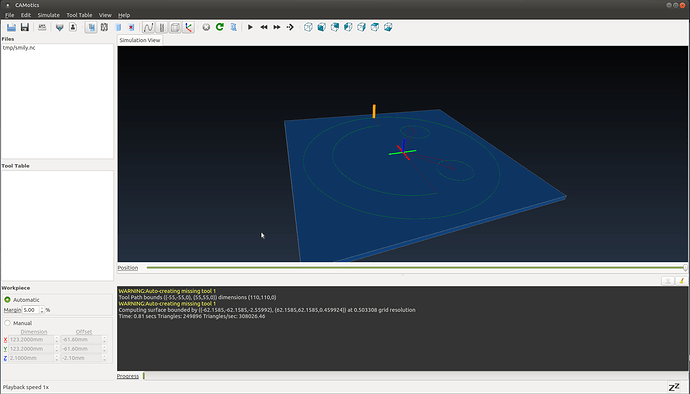 In the bCNC picture you can see the line ‘G91 X-10’ is the point where GC goes nuts.
It renders the line after and then goes nuts.
Please give this guy a >Thank You< form me.
Something that someone should look into.

Yes, the kids in the philippines are just beginning to learn about this stuff (and me too). things like G90 and G91 is like a foreign language to them but in time they will be able to understand it all by way of our explanations. Ps the fbcadcam forum is not public so if’n you all would like to post in that forum just let me know what user name you would like and i’ll set up a temp password for you. email me at opreese at gmail.

My full time job is a truck driver in the United States. Programming is my hobby. I call it a hobby cuz all though I had hoped to create some for profit apps in the past, I gave up on that idea years ago mostly cuz I ain’t no professional programmer, hence I just code for fun and share my open source code freely. Free as in Free Beer is how I describe it…

Anyhow, nice to meet you all. And thanks for making MaslowCNC open source.

So now that I have a Maslow set up in the Philippines and a bunch of college interns learning how to program in freeBASIC and learning about CNC stuff… It’s time to think how add CAM functionality to fbcadcam.

In my program (fbcadcam), you can draw lines, circles, arcs, ellipses, elliptical arcs and rotated ellipses & elliptical arcs. Drawings are saved in DXF (R12, R13 or R14… I can’t remember which) format and for the most part, can be opened in other cad programs but sometimes with error cuz i hand coded the part where the dxf is created. In fact all functions of fbcadcam are hand coded (meaning I’m not using any cookie cutter libraries) except for GTK3. In the older versions of fbcadcam (previously called fbcad) i hand coded my own GUI which was fun to do but lacked anything appealing to the general public. So I decided to use GTK3 cuz it looked great. I was going to use QT but couldn’t figure out how to get it to work with freeBASIC.

Any how’s, it time to focus on CAM. I sure would like to hear from you guys regarding what you think I should do. For example, I anticipate that part of CAM is to define the (drill bit / cutting) PATH which I figure is simply an internal or external parallel (offset based on drill bit radius) to the existing entities in the drawing (entities in my case being lines, circles, arcs, ellipses, and elliptical arcs). Along with this is defining the drill bit depth (Z) for those points where you would want to insert and retract the drill bit (insertion at various depths for cutting purposes and retraction in the event of moving bit to next insertion point).

I do have some parallel functionality built into fbcadcam in which you can created internal / external parallels to lines and arcs but it has bugs and is in need of debuging. Of course I plan to include paralles to circles, ellipses and elliptical arcs as part of this functionality. My idea is that the paralles would serve as the tool bit PATH in which I will derive G-code from.

If I am capable, I do hope to some day contribute to Maslow’s python routines in an effort to build in support for things like rotated ellipses and elliptical arcs. In case any of you pythoners would like to help with that and need to know how to calculate the points along a rotated ellipse and / or elliptical arc then please feel free to ask. Even though the code (my method of doing so) is available for your review on my web site, I would still be willing to describe how I figured it to be since most folks like to refer to arc start and arc end of elliptical arcs in degrees based on the angle from point 1 ellipse center (x1,y1) to point 2 (arc start/end) (x2,y2) in a counter clockwise polar coordinate system where 0 degrees is at the 3 O’clock position and 90 degrees is at high noon.

By modifying the Python / Arduino code with such, one would be able to cut ellipses and elliptical arcs and rotated ellipses and elliptical arcs much faster on the Maslow similar to using the current available G2 and G3 functions for circles and arcs. The issue regarding speed of cutting from point to point along the circumference of a circle using a series of G1’s rather then a single G2 or G3 is that the drill bit needs to be slowed down as it approaches its G1 destination (359 times in the case of 1 degree circles circumference movements)

If the maslow code could be modified to supports such things the first question would be what G-codes would we use for ellipses and elliptical arcs. I volunteer a deriviative of G2 and G3, we could use or call it G23. And unlike G2 and G3 where thins are done in a relative way, I would like to suggest to make the parameters of G23 absolute right from the get go, ie. G23 x1,y1,Major Radius, Minor Radius, Arc start, Arc end, Rotation (where x1,y1 is circle center)

Oh, wow, I think I might be ranting too much. Maybe I should wait to see if there is any interests in this post before I go on too much further…

anyhow…
here are some links to some videos i posted for the kids in the Philippines in an effort to encourage them to learn how to program.

ps if’n u b interested in what i am trying to do in the PI then feel more then welcome to review our forum conversations in the fbcadcam forums.

it is my hope to encourage the PI kids to join and participate in this forum as well (maslowcnc forum) and perhaps the eventually will in time…
cheers u all.
owen