What development environments are people using to work on GC and the FW? I’m new to the whole forking and pull requests and currently pretty much edit things right in github (little changes). But to do something more substantial and actually be able to test it out, I need to have the code on my computer and not just in github. So I’m looking for a decent solution to be able to do code development on my laptop, test it on the hardware, and then “push?” it up to github as a PR. I assume others are doing this already.

It will let you download a copy of the code, create a branch to work on, and when you are ready create a pull request to merge it back in.

There is a command line version which runs much faster, and is really not that difficult to use but the GUI makes it easier to have a good sense of what is going on.

To actually edit the code you can use any text editor. I like Notepad++ 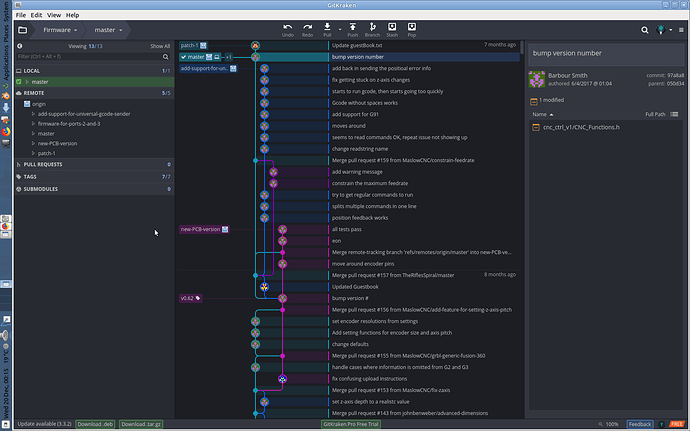 The answer to every problem. Full disclosure, I use vi(m) and never tried to use emacs

I use atom: https://atom.io/. It is a big boy, and will undoubtedly irritate any emacs or vi(m) users out there.

It has optional extensions that can do all sorts of stuff. It runs on every platform. It works great with git.

I use vi(m) and never tried to use emacs

VI is for super heroes. Hollywood fails to show that. But thats probably because nobody in hollywood knows how to save and exit VI. Only a real superhero can remember stuff like that. Maybe Stan Lee should do a “Mooseman” series.

Much respect for all the devs out there who manage to work with all those IDE’s and still can build applications that are intuitive enough to be used by non dev’s.

GitKraken looks kinda intuitive, I will have a look at that. And also Atom.io

I really like atom. I got github desktop working along with atom, and it’s cool to see on github desktop the changes that were made to the code. However, when I change a file, I noticed that atom has gone in and seemingly deleted blank lines and added them back. It looks harmless enough, but I’m not sure why this is occurring. Have you run into this?

I don’t use the GitHub desktop.

But what you describe sounds like maybe a line ending correction? \r\n to \n maybe?

It could also be a whitespace fix. There is a package in attic called whitespace that will delete extra whitespace. I basically had to turn it off because we have quite a bit of trailing whitespace issues.

Trailing whitespace can be removed in an editor supporting regular expressions fairly easily, although it’ll undoubtedly give Git fits. I suggest sed, although (g)awk, perl, or undoubtly python could also be used to whip something off. And, of course, emacs

You gotta love how after all these years the whole EOL issue hasn’t been sorted out. At least it’s improved a little. Our 360/44 terminal system (RAX/44?) would also read paper tape from an ASR33 that was never very busy. Every line had to end in CR LF X-OFF rubout rubout, still see and hear them in my dreams

Just remember forward development should account that some of this hardware is still online and should be able to communicate. I still have a Acoustic 300 Baud modem in the garage. I’ve been templed for years to try 90 baud with 2 tin cans and a fishing line. I’m pretty sure it could be done, however defiantly need error correction on and would have a ton of resends. Granted writing it down on paper wrapping it on a rock and throwing it over is faster.

I still have a Acoustic 300 Baud modem in the garage.

Coo!. Now can you find a phone that’ll fit it? Gosh, I’m so old I can remember (sort of, oldtimers) when that was really fast and acoustic couplers were the latest thing.

I think there’s still some around 1200b ISA bus modems in the junk box but I think all the 300b ones are long gone.

The phone is no problem as I kept one to go with the modem. I need a ringdown to tie them together for my End of the World start up network.