How fast does everyone cut?

So first of all I have not set my Maslow up yet, just getting ready to, but I have been reading these forums and had a question about cut speed. I saw some people posting about 30-50 hour cut times for projects and wondering if there is a way to speed up larger projects. Does that just have to do with the fact that it is how fast the Maslow can cut? Or what are the limitations? If you have a larger more powerful router can your cut times be reduced by upping your travel speed? Is that even an option?

Until there is some sort of acceleration/deceleration planing implemented, the speed is pretty limited.
Imagine the sled could sort of ‘swing’ at sudden direction changes.
We have been at 1000mm/minute but had to go down to (700 now) as with heavy sleds moving horizontal at the top of the sheet, the motor pulling could not keep up with the other motor feeding out.

Edit2: edited current feed rate 1.11 Use with care! The setting is found in the firmware folder in the file Settings.cpp
I would not, but you could edit the number in the arduino IDE before uploading to the mega.
Note that the arduino IDE stores that change without asking, so it’s better to work on a copy. 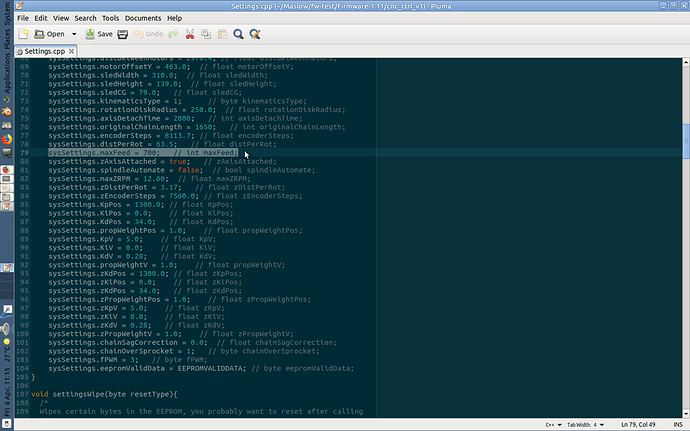 I made my first cuts at 30ipm (762mm/m), and the results were pretty good. I had some problems with my over-sized sled tilting off the work piece and hitting the plywood supports on bottom. Aside from that all the parts fit together well.

My second cut was not as good. I think I had the feedrate too high for what I was cutting. It was 40ipm (1000mm/m) or about that, and the shapes had a lot of tabs and dogbones. It missed the dogbones almost entirely and the downward cuts wandered a little. I’m working on the settings in Fusion 360 dealing with feed optimization. I haven’t yet got it to slow down on corners or small areas.

another aspect to having jobs being very long is how deep you cut on each pass.

I’ve seen recommendations of the limit being anywhere from 1/2 bit diameter to
2x bit diameter as a general rule.

Bar tends to be extremely conservative on this and cut 0.2" per pass, so it
takes lots of passes to go through things, but he has also done tests where he
cut all the way through 3/4 plywood in a single pass.

There is one more consideration to factor in, and that is material hardness. If you are cutting a piece of hard plywood, verses say a piece of pine, or even foam.

While I have some v1 sled issues to overcome…

Assuming one has good ‘adhesion’ of the sled to the workpiece, via a well balanced and parallel sled, good frame angle, and enough mass on the sled, the router sounded like it wouldn’t complain about a little more load, maybe another ~50%, either in speed through material or depth of material.

I was disappointed to find that full 3-axis movement hasn’t been implemented yet. the most ‘disjointed’ aspect of my cuts and the place where the most improvement, towards consistent manageable loads (and presumably the most ‘fluid’ motion possibilities would be with the Z-axis keeping up with X-y motion to ramp in and maintain a constant load across the whole cut vs the current ‘plunge’ (which pushes back on an unmoving sled), ‘cut’ which starts the sled under inertial resistance, and the new cut load, and ‘stop’ (inertia + load).

Without a fluid 3axis motion this is impossible.

In Fusion 360 i use helix plunge, slow as hell but very smooth plunge to depth.