Someone else using a hanging system as well.

That’s very cool. I’ve seen some stepper motor drawing robots, but nobody else using DC motors. He doesn’t use encoders, but why bother if random motion is the goal

This could simplify the machine?
Just have one long chain and the sled can be hung in the chain quiet easy, just mark the centre link of the chain.

Hummm, I wish i could show you what i have in mind.

It should be possible to use a fixed sprocket as a locking ‘grip’ I have a few thoughts on how to do this, but as i don’t have a machine myself I have to depend on my Imagination.

In the video’s i now see 2 chains being connected to the effector, It works fine but looks a bit like having the need of a 3rd hand. If the chain was one long chain marked in the center then it would seem to be more easy ‘hang the effector’ over the chain somehow and then lock it in place.

My aplologies if i’m to vague at this point, not being able to express my idea’s in ‘grammar CAD’. My previous post was indeed not explaining very well.

If the chain was one long chain marked in the center

Wouldn’t that center link of the chain be right where the router bit (or pen) wants to be?

I tried to make a drawing 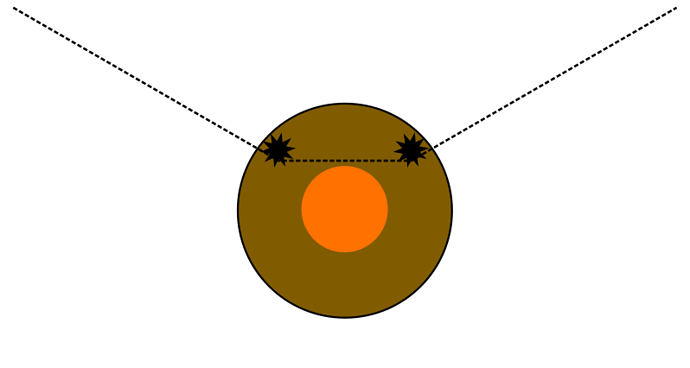 If that makes any sense…
This way you don’t need to reach for chains hanging on the sides while holding an expensive router and 2 bricks in one hand.

2 fixed sprockets, and not interfering with the router… I hope I trigger someones toughts with a better idea.

I think this could also work with the linkages that are explored to keep the tool in the exact centre.

Definitely an interesting idea. I would wonder if those sprockets would have problems with skipping as did the motor sprockets, though. 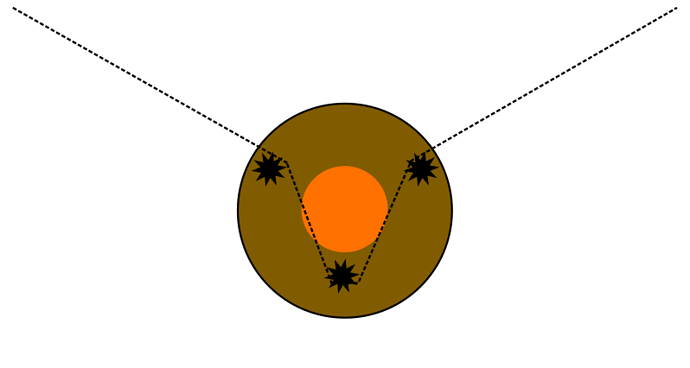 @jwolter I wasn’t aware of skipping chain issues. This could be another option, the angle around the 3rd sproket should be sharp enough to prevent skipping .

but the second is more complicated, also more complicated to hang the effector in the chain so that may just kill the purpose of the whole idea to make it a bit less cumbersome to make toolchanges

Don’t you need two separate chains though so that the router can actually move around left to right? Wouldn’t a single chain just make this whole thing only move up and down? Maybe I’m missing something.

@chauhuh the sprokets on the effector are fixed (not able to rotate) in these examples. The teeth of the sprockets then ‘grab’ the chain.

This way you don’t have to reach far and wide to grab a chain after changing a router bit. Just hang the effector on the chain. With 2 hands, in one simple move if possible. Less cumbersome, and also less risk to let the most expensive part of the machine slip out of your hands.

Whew, thought I was going crazy.

So what would the practical advantages of having a single chain be if the sprockets are fixed?

A less cumbersome way to take the effector from the machine and placing it back after a toolchange.

Or at least I hope so. And less risk to let the most expensive part slip out of your hands.

S hooks could work. I put them on the chain idler sprockets after the swamp rats returned the one that went sproing. Just don’t pinch them closed like I did.

You could do the same while connecting the two chain ends and eliminate the need for extra hands or hooves to hold it while attaching, although that might not work well with a ring or pantograph. S hooks should, though.

I really should order a machine… This stuff is exiting to think about. Maybe i need to make some mockup be able to play along on the outside of my brain. I have a few more ideas in the making, but it’s so damn hard to explain i better should spend some time on the electronics.

I drilled a 1/2” hole near the top edge of my sled and put a peg above the top center of the workarea so I can hang the sled to remove the chains.
Toolchange only requires removing the router motor from the base though, the sled can remain fixed in position.

one problem with using sprockets to mount the chains is that the position where
the chain meets the sprocket changes based on the angle of the chain. that
complicates the already very messy math needed to figure out where the bit is
for a given length of chain.

ok i see, reality wins… the changing chain angle at the sprocket then indeed becomes an issue

Haven’t thought this through, but if the sprockets were at the ends of the pantograph arms, would that work better?