I’ve been meaning to put up a photo or two of my setup for ages. 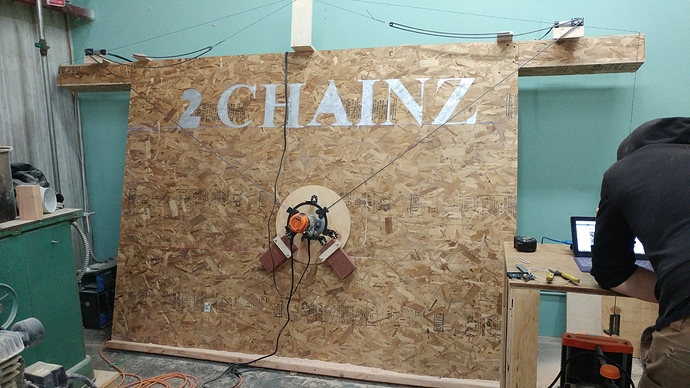 This is the configuration I’m working with at the moment. The overall frame needs some refining, but I’ve been really happy with the box beam. It is made of 6" strips of 1/2" osb glued (polyurethane construction adhesive) and nailed (18ga finish nails) with offset seams to make a 12’ beam. It’s cheap and VERY rigid once everything is dried. I did a box beam because I thought it would be critical to keep the chainlines in plane and reduce torsion, flex, etc., but after working with the machine for awhile now I don’t know how important that actually is…

Anyway, thought I’d share and see if anyone can benefit from it.

I think it’s brilliant. For one thing, you could potentially cut it with a Maslow especially with staggered seams! Great idea

Really neat idea! If I were starting over, that is the way I would go.

Are you getting any flex on those motor mounts? Early on I found that screwing my motor mounts into the wooden beam (screw & glue design) with the provided kit screws was not adequate, and they worked loose. Ended up running 4” x 1/4” bolts through the 3.5” side of the beam, which really worked well. Any movement on those brackets will cause problems with the calibration.

I haven’t noticed any flex in the motor mounts so far. It’s not the most elegant- but works ok. If I were going to do it again I’d build the frame more like the other designs that have the top beam set further out from the cutting plane so I wouldn’t have to have the plywood motor mounts. Ah well… always improvements…