re: Top Beam attachment to the frame.

How should the top beam be attached to the frame

For the standard frame, the top beam will not be adjustable.

The version 1 approach of attaching the motors to a piece of plywood and attaching that to the frame is something we want to get away from, the plywood flexes and the attachment to the frame has proven to be less than rigid (even with a lot of screws driven into the joint). And finally having the motors stick out gives them leverage to flex the frame.

We’ve talked about having several layers of 2x4 spacing the motors out from the top beam, but that has alignment problems and still gives the motors the ability to flex the frame

As a result, we are wanting to attach the motors directly to the top beam roughly as shown in the pictures of Bar’s work, for example 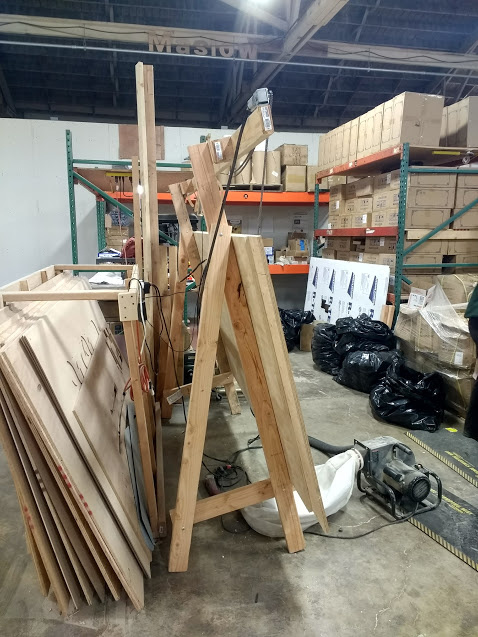 For the standard frame, the forward face of this top beam should be about 6" forward of the face of the leg.

We have looked at multiple ways to do this, none of them is obviously right, and all of them have problems

What other ways can people think of to attach the top beam to the frame?

@Bee is talking about having a horizontal 2x4 at the top of the frame and the top beam fastened directly to that. That makes the top beam very rigid in both directions, but doesn’t get the motors in the right place.

with our current approach of laying the board flat, we have more flex than we would like, but attaching a board or piece of plywood to the back of the top beam would make it significantly more rigid.

My take on this. I was looking for bolts but it hit me you can buy all thread and use nuts and washers as well.

It uses 4 1/2 threaded parts (bolts or all thread) to make 2 pushers to adjust outward and 2 pullers to join the front and back. 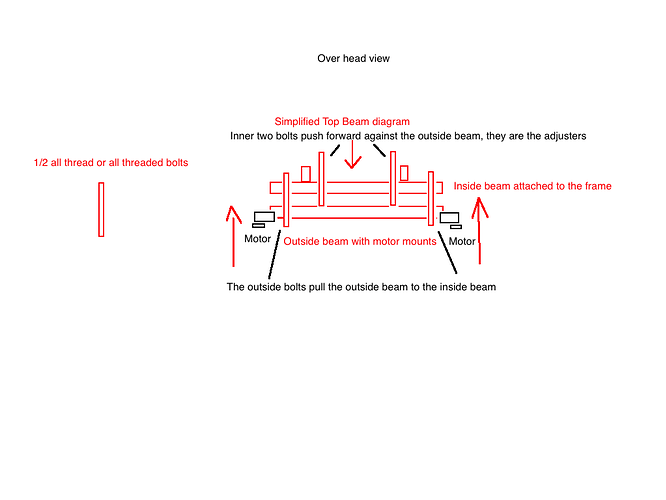 have the board upright, with a block behind it (how do we keep it from being tilted as it’s fastened, the front of the beam needs to be parallel to the legs/chains/etc)

As it’s fastened or as the glue cures?

Toenail a screw into it or add a very inexpensive and readily available mending plate.

I know it would add additional weight and cost but would using a 4x4 work for the top rail. It would be extremely ridgid.

I personally am leaning towards the unistrut solution for my build.

I know it would add additional weight and cost but would using a 4x4 work for the top rail. It would be extremely ridgid.

I personally am leaning towards the unistrut solution for my build.

a length of LVL would also work well. as the beam.

For my machine, I’m going to use the unistrut angle to hold the top beam (I’m trying to find out if there are enough people in southern california who want to do this that we can order a box of 20 without having to ship them)

yes they are, and a good bit stronger, also available (via special order) from big box stores.

but right now we think that they are overkill, and so are looking at just using standard stick lumber

Yup… I allways tend to go overboard on things like this.

I have to fight against this all the time.

have the board upright, with a block behind it (how do we keep it from being tilted as it’s fastened, the front of the beam needs to be parallel to the legs/chains/etc)

Last night I ran a test to see how much the beam moves as a result of a possible “expansion” of the glue as it dries. I used gorilla glue and made the top beam attachment to an arm using the block as described in another post. I used two screws to secure the top beam to the block.

When I made the joint last night, the distance as read by the calipers was 5.265 inches. Just now, I went and reread the measurement (approximately 20-hours later) and the measurement read 5.254 inches. This is a smaller distance than the original so there wasn’t likely any expansion of the glue that would lift the front of the beam. It could just be measurement error (i.e., can I put a caliper on a point within 11/1000ths of an inch precision?).

Based upon the test results, in my opinion, there’s no issue with the block technique. Also, the glue makes the joint immovable as well.