I have recently finished building the frame for my Maslow. When I attempted to connect the shock cord in the top-beam configuration, I felt the 1/16" shock cord was inadequate as either single-strand or double-strand. I felt like the shock cord did not produce enough tension to control the chain. The shock cord was too loose at the extreme of motion. The excess chain hung low enough that I thought it would get tangled with the working-side chain.

I need to get a picture, but I bought 1/8" shock cord. I moved the bearing to the other side of the beam, so that there is more length overall, so that the tension applied to the chain was closer to constant across the motion range. I also used a wire staple to hold the cord up, so that it held up the cord near the middle of the beam. By doing all this, I thought the chain was well managed, and it was safe to move forward.

Several people have mentioned having a chain entanglement problem. Is this related? Could someone comment on whether or not they believe this is the case?

It might be prudent to re-visit the shock-cord that is provided in the Maslow kit. In addition, it might be worthwhile to consider modifying the stock design, and update how to configure the shock-cord.

I’ve also noticed that, at times, the “stretchy string” does not really tension the slack chains very well, especially when there is a lot of chain on the slack side. I’ve pulled mine pretty tight and it still can get pretty slack. I haven’t had any major issues with it while the machine has been running, however, so I’m not entirely sure that it’s a high-priority issue. I have noticed that the S-hooks that connect the stretchy string to the idler sprocket will catch on the edge of a sheet/cut if I’m not careful, though.

Some people have replaced the string system with counterweights. That’s the route I would like to go myself, but I also want to make sure that it will work with running the slack chains along the top beam rather than down the side. I’ll need to sit down and draw it at some point.

Here’s a way to test - using the arrows run your sled up to near one upper corner of the workarea, the across the top toward the other upper corner. At the top is where the most slack chain occurs, so if your arrangement handles that gracefully you’re golden! Do post a picture!
I agree that the ‘stretchy string’ feels pretty wimpy in the top bar arrangement, but one needs to be careful that the slack management doesn’t apply too much force - the Kinematics calculations rely on the sprockets not having any backlash due to the weight of the sled. At the bottom corners the farthest sprocket doesn’t have much tension from the sled, so backlash upon a direction change could happen if the slack storage is too aggressive.

I agree that we need to re-think the way the chains are tensioned. Because of the timing of redesigning the frame we had to order all the parts before the final design for the frame was complete so the tensining system is basically just the old vertical system rotated 90 degrees.

I would love to see a picture of your redesigned system and hear about your experience with it. Some of the designs that folks are doing with counter weights are looking good also.

I think I might write about this in the newsletter this week to ask what other suggestions the community has.

I will be interested to see other solutions, too. I will try to remember to take a picture.

Yeah, first thing i’m gonna do when i get my maslow is put the stretchy cord in the ‘use this for another project’ pile

Agreed. However, with the larger, longer shock cord it is pretty good.

I was able to snap some photos this morning. Here they are: 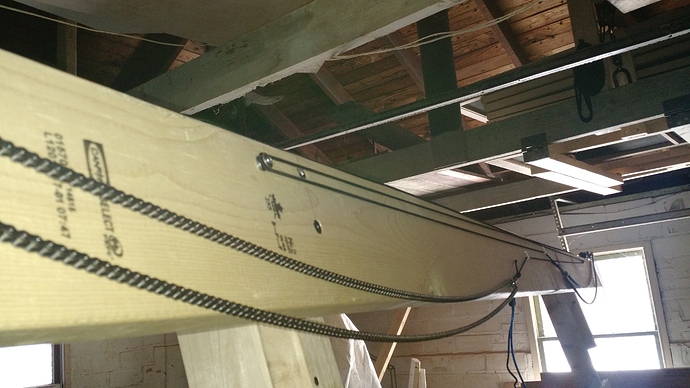 The extended length means the tension on the chain is fairly close to constant through the range of motion. The photos show the limit of motion for both chains, in the closest position.

Here is a photo of the center of the beam, of the wire staples. 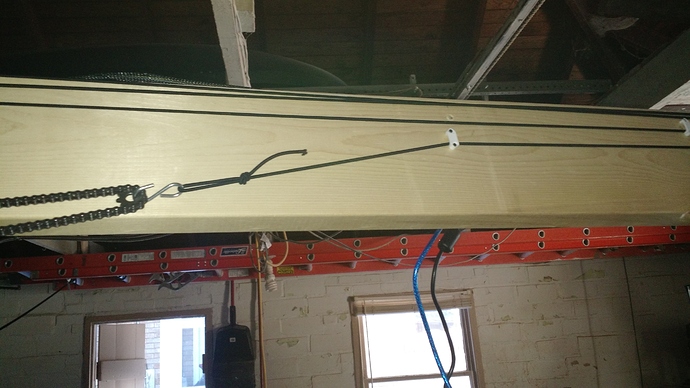 Has anyone tried a single shock cord connecting the two sprocket hooks to each other, completely skipping the bearings? In X axis motion, I’m guessing the length of the cord would stay static, since you’re taking up chain on the left just as much as you’re feeding chain on the right. In Y axis motion, the cord would be shortest when the sled is at the top and longest at the bottom, so there would be a set min/max length of the cord. Top center would be the shortest length and bottom left or right would be the longest length. I don’t know if a shock cord would have enough give for each sprocket to hit the farthest X/Y points and keep the whole chain system from sagging, but that would be the idea. I realize that the chain would be in the field of the material when the sled is near the bottom, but I don’t think that would cause an issue, since it would always be above the sled.
Thoughts?

Edit: I just realized that the chain would never be in the material field as long as the cord kept tension on the chains when they were at their longest length and the cord was at its shortest. Not sure if this would theoretically happen.

I am looking at changing the shock cord to either a heaver cord or a counterweight. I also would like to change the S hook that attaches to the gear. I was thinking of a U shaped piece of metal or something that will not snag the top beam as it is moving.

After getting my Maslow calibrated, I couldn’t wait to cut something, so I pulled a file that I set up while waiting for the hardware to arrive… a set of folding saw horses for a workbench I will build with all CNC cut parts. Although I thought I had tuned up the shock cord system, when the sled got near the top of the board, the loose ends of the chain crossed the drive chain, and I was fearful of a chain tangle or a skip. I paused the cut, and, remembering posts about using stronger bungee cords, scrounged around and found a cord that was about 30”long, and could stretch to 84”. Seemed like a good rage for the Maslow, so I just hooked it across the two sides on the same hooks as the provided stretchy cord… 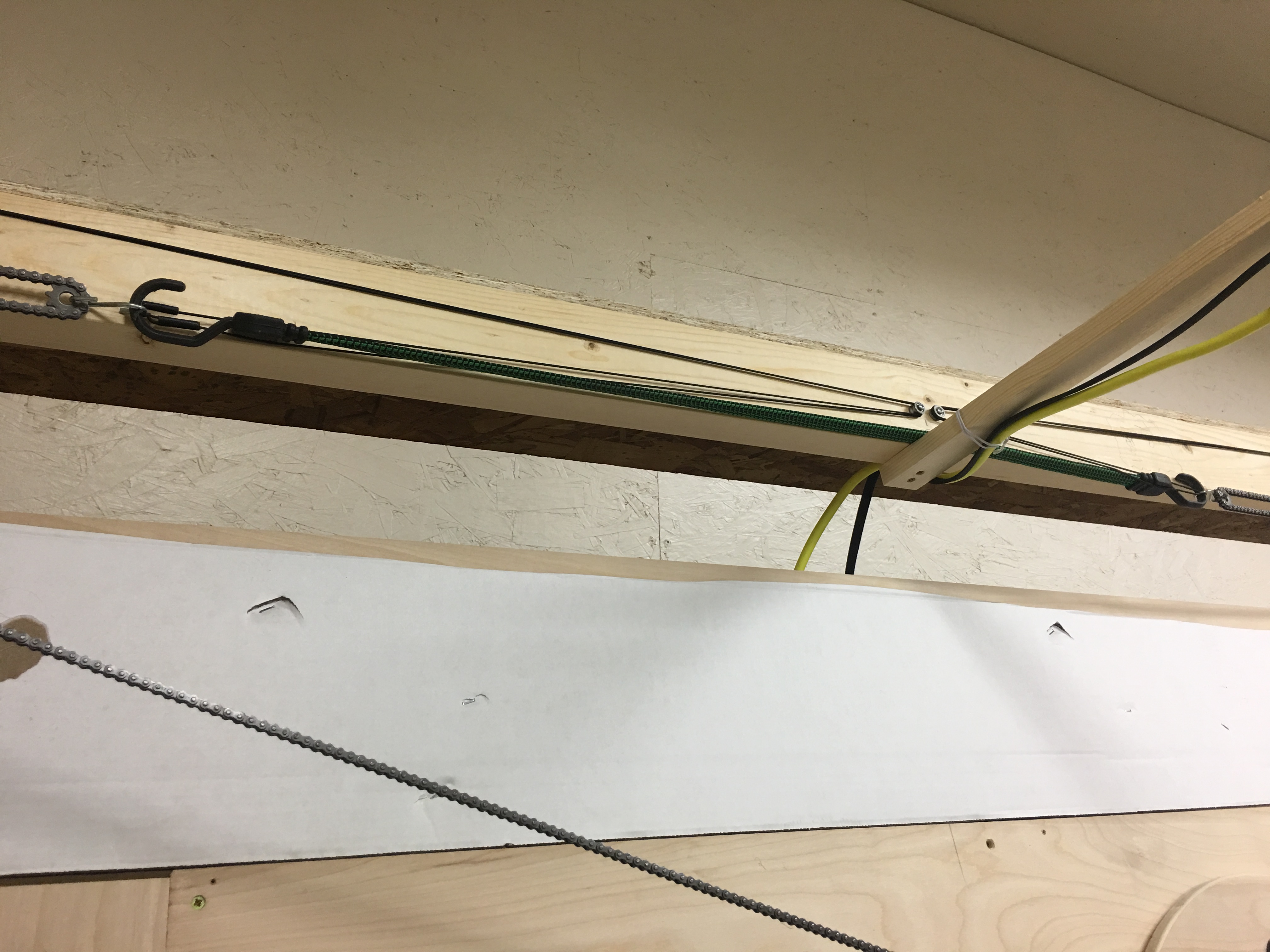 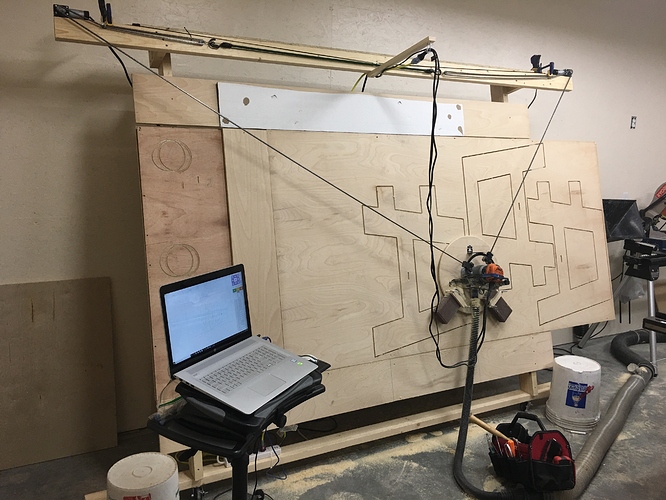 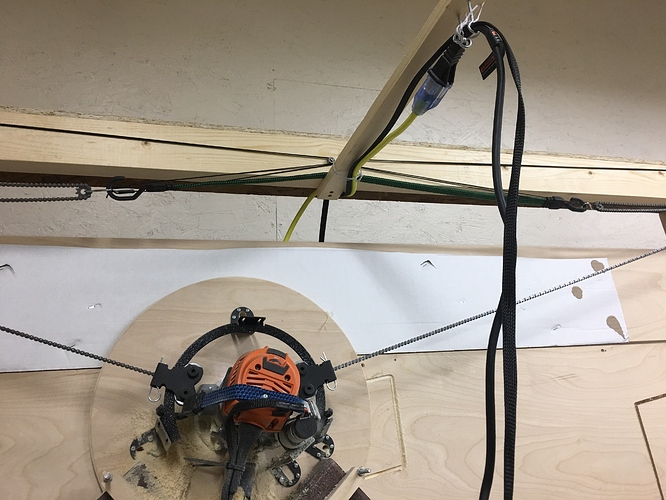 Wow, what an improvement! The chains now stay out of the way! I added the only two left over parts not used from the original build, a couple of nylon sleeves that fit over wood screws, to guide the slack chain away from the nailed chain ends. Refinement is needed here, as when the sled is high in the top corners, the drive chain my hit those guides and cause a cut error. Thanks to all that have been suggesting this upgrade… it really works!

I haven’t built my Maslow yet, but the counterweight idea seems cleaner than the various shock cord ideas, and I am going to go that way.

Also keep in mind in talking about counterweight people have brought up that you don’t want the weight to be too much compared to the sled weight (with 2.5lb calculated in another thread), but with the shock cord methods you really have no idea how much tension is being put on the chains, and it is non-constant.