I am having a fair amount of trouble getting the elastic cords, rollers, and hooks to perform their task…

During my initial build of the default frame, I figured the provided elastic cord was cut to the proper length, so I just followed the instrux and moved forward. Then I started the calibration routine, and the loose chain interfered with the drive chain on the left side and caused the drive chain to skip on the sprocket several times in short order. 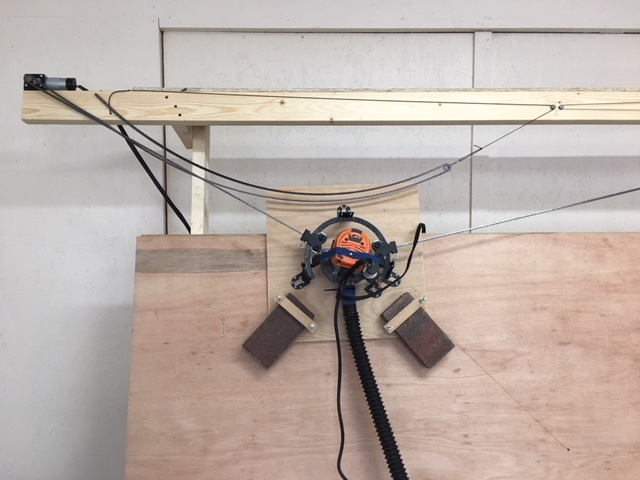 So I shortened the elastic on both sides, and started the process again. After several adjustments, I have those cords down to less than 3’ (their limit, I think), and still the sagging chain is coming between the drive chain and the top beam… 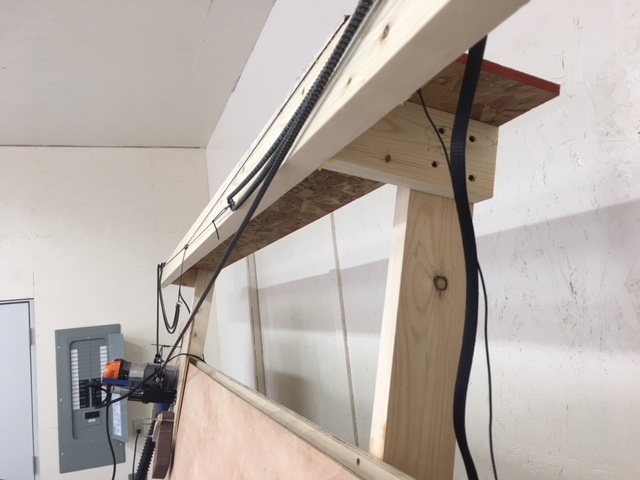 Looking at the above side view, perhaps I could raise the ring on the sled a bit to create more clearance between the chains. But, the sled is really well balanced the way it is. I am wondering if it would help to raise the pulleys where the elastic doubles back, maybe several inches (not sure how). Any suggestions?

the sled is really well balanced the way it is

You sure want to keep it that way.
The chains are ideally parallel to the ply sheet. Perhaps using a spoil-sheet behind the project-sheet will bring your sled more out and resolve the issue.

Why don’t you try using an ordinarry rope, putting a pulley on the left side near the motor and just using a counterweight.
A bungie cord has the least force when it’s at its shortest, and that’s when it needs to hold up the most chain.

Previous frame designs used bungee controlled tensioning with the slack end of the chain going to the outside. I read somewhere on the forum that the latest inside system was to get more wrap on the drive sprocket to reduce skipping. Dag83, I am considering the switch you suggest, but would like to read about the development of the new approach. Do you know where that is on the forum?

On the wiki you can find bars setup here: https://github.com/MaslowCNC/Mechanics/wiki/Bars-Bolt-Together-Frame#step-11-install-chain-hardware

There are a few discussions on calibration with -> bottom feed -< if you use that in the search.
I can’t find bottom feed specific topic.

I am using the top mounted setup like you. I did not cut the bungee. I folded it in half and used “two” pieces. Seems stronger to me that way. I have cut in extreme upper corners with no skipping. Maybe get some more cord and try that?

Yes, if you read carefully you’ll see that both ends of the bungee go over the head of the screw. The hook goes in the middle of the bungee. I had the same problem.

Hmmm… looks like I missed that. Seems like the folded approach would help. I will try it right now!

Thanks! Love this forum!

I’ve replaced one bungee with a single six foot length of 550 paracord. One side attaches to the slack sprocket as normal. The other side I tied to a pair of 3.5" SAS HDDs (with their carriers). The paracord is looped over the bearing at the center of the top strut and allowed to dangle behind the waste board six inches from the center (to not interfere with the electronics).

Right now, the para-cord drags in a couple spots. This approach could use some improvements.

I’ve yet to run this, but I notice already in it’s current position, the slack is a bit more taken up. I’m curious to see how it compares during an actual run. 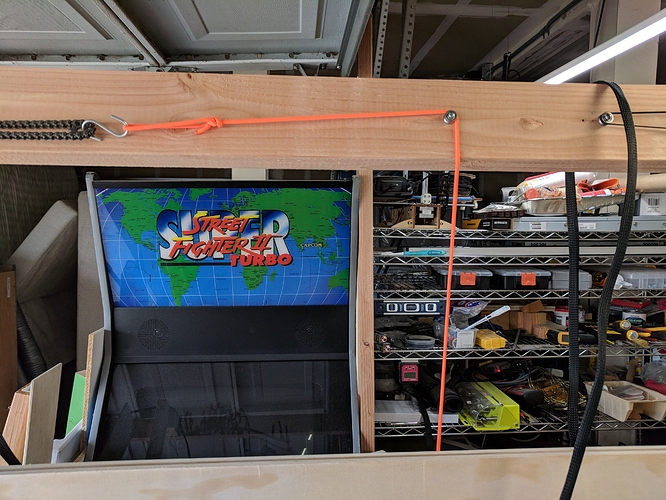 I picked up some screen door roller assemblies from the local Orange Despot. I may have to reposition them to gain additional clearances, but so far looks good. I’ll test later today.

See rollers/bearings at the bottom front of the top strut, and at the top back of the waste board. 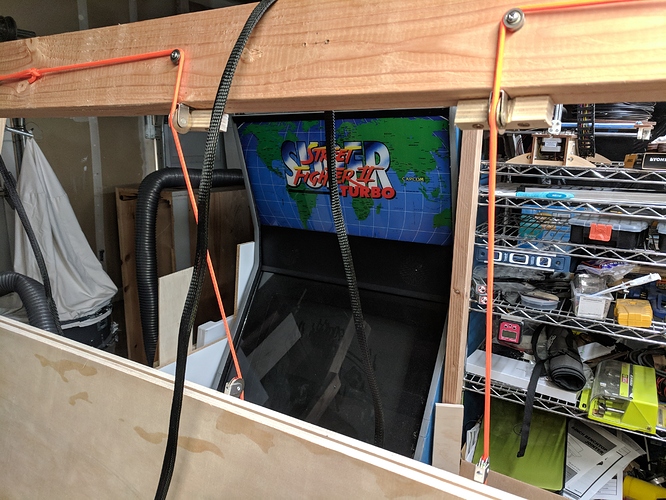 An unintended consequence, by bringing the bungee/paracord pulleys away from the center of the top strut (to avoid interference with the electronics), I’ve noticed it reduces necessary slack take-up capacity that ensures full range of the sled. I’ll add a couple more pulleys, and see how it will run.

I really think this approach will improve control of the chains.

as a note, you can tie the rope around the neck of a 2L soda bottle and adjust
the weight by adjusting how much water you have in the bottle.

Okay, I rearranged the pulleys to allow for maximum slack take-up and redirection of the counter balances to the sides of the electronics. It’s a filthy kludgey hack, but enough for demonstration purposes. You’ll notice with this approach, there is a torsional load applied on the top strut (something to keep in mind).

I’m thinking after getting this POCed, to properly draw up the parts and cut a final version with the Maslow. 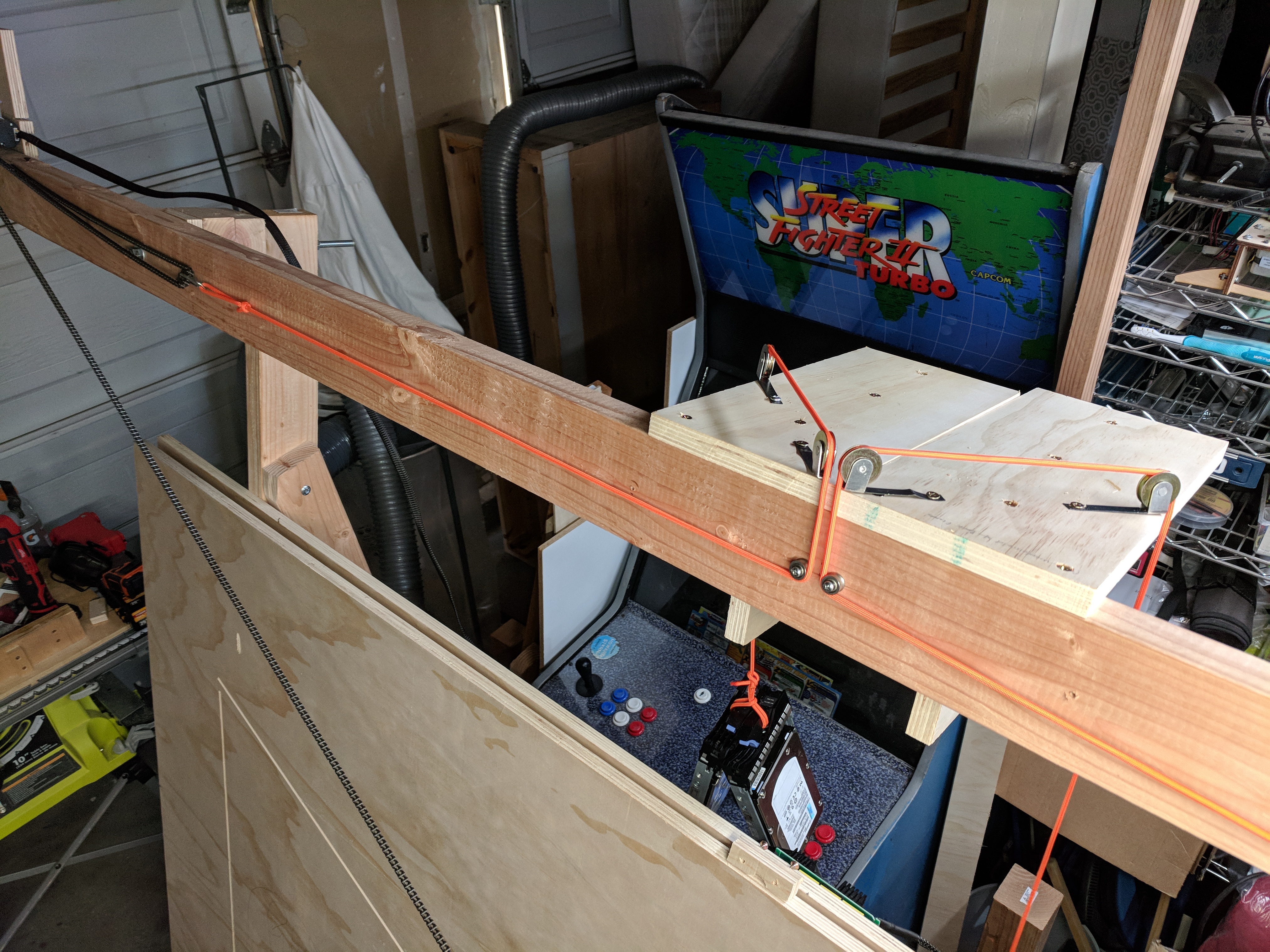 Picture from the back of the frame. Please excuse the sloppiness of the electronics wiring. 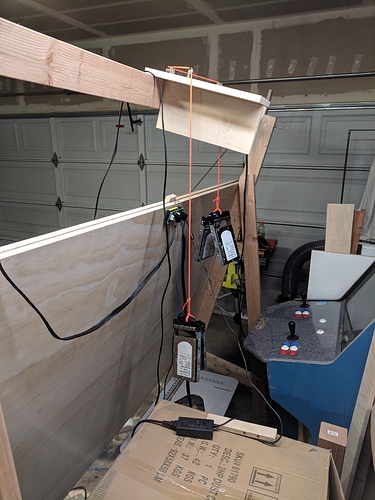 wouldn’t it be easier to move the electronics to the side and just have the prior arrangement but nearer the center?

The thought crossed my mind. I think my rational against it was the desire to not fight with the PCB standoffs (I’ve dropped them a dozen times when trying to get the 2nd and 3rd screws in).

This gives me another idea: a PCB mounting sled. It would make for easy removal from the back of the wasteboard. Hrmm.

I like your chain wrap reroute idea. Might steal it. I built a small box for the Arduino and shield before I even built the frame. Just didn’t seem safe to hang it out there all alone.

I installed the bungee’s incorrectly the first time… now that I have doubled the belt around with both ends connected at one side, the chains are working well’