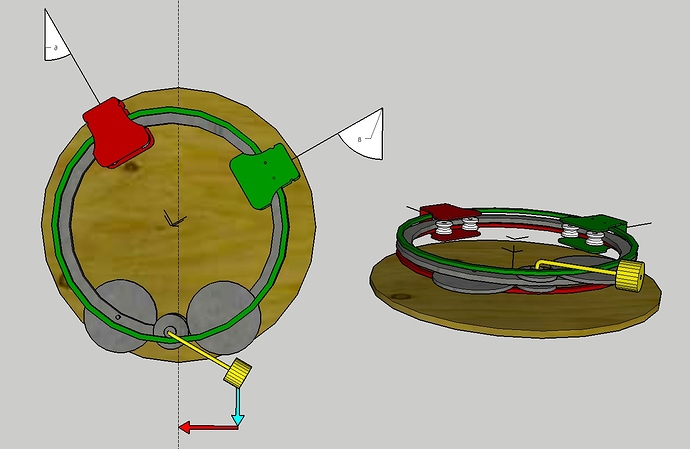 A try into accuracy thinking.

to get a better accuracy in the lower corners, we need to compensate the lack of lateral force when router is located in the bottom corner.

it should be possible to create a simple meccanism to be added to the Maslow ring to move a weight Tail to shift the center of gravity to the side. a way to increase accuracy, helping with the sag issue.

2 concentric rings on top and bottom of the Maslow ring, one for ∂ (in red on the design), the second for ß (green).
all parts in the same colors are solidaire, but moving on each other.
The ∂ ß angles will be transmitted via a rack & pignons system, then turning the tail clog. Depending on the rack teeth, the tail will start to engage (not all the time, also solve the issue of ∂ fighting ß).

For simplicity the design didn’t show : the racks and pignon system, the bricks, L bracket, router, …

To work the tail weight would be limited to a portion of the brick weight. (no overload on motors)

What do you think ?

I think I am missing something here. The tail is attached to the fixed portion of the ring (the grey part), such that it has one degree of freedom (rotation), correct? As the carriages roll along the ring, they move the red and green rings, which interface with pinion gears, which rotates the tail. But if both red and green rings are connected by gear to the tail, how do they move independently?

on the green and red rings will be cut the rack teeth. all the lenght are not be covered with teeth but only the extremities. when no teeth, the pignon aren’t engaged. it start to engage only from a certain angle. that way you could avoid an engagement for ß if ∂ is alredy engaged, and the opposite.
positioning the teeth cut, would determine when the tail move.

From the viewpoint of the two chain attachment cars, wouldn’t this just look like one brick is heavier than the other, letting the whole thing pivit until the heavy side is down? If there is any resistance to the attachment car free movement that would spoil the straight line from the bit to the motor.

I think that is some brilliant engineering. I claim no special skill in the area but wonder if anything creating resistance on the movement of the chain attachement points would have an undesirable effect.

Yes blurfi, you are right, but it’s exactly the effect you are looking for. (a lateral force)
at a sled position in time, the chains lenght don’t change. the whole sled weight being hold on 2 points (cars), which are ex-centred from the center will keep the all thing in place (brillant feature of the sled ring).
at the bottom corners, ∂ would be small and ß large (or the opposite). a large angle will counter the lateral force (also think chain weight generating sag)

Shady , with “resistance” you have a point, it’s not extra force on the motors (opposing the sled’s weight). but frictions in the mecanism is unknown (green on grey, red on grey). but motors are powerful.

either the weight will just rotate the sled (in which case, what good is it
doing)

the weight will mean that the line along the chain to the bit is no longer going
to be straight, and your chain length is thrown off as a result

either the weight will just rotate the sled (in which case, what good is it
doing)

the weight will mean that the line along the chain to the bit is no longer going
to be straight, and your chain length is thrown off as a result

again the tail length should be limited into reasonable value, but you have a lot margin here before the sled is able to be tilt off the depth line due to it size. (the tail weight is only a portion of the sled total)