@Bee , I think it would only be worth it if I was simply putting in different machine screws…

Maybe not so much if it takes me weeks to figure out the specs!
(Although it seems like basic engineering stuff I should learn about anyway…)

Great idea with the coring of the screws!

Absolutely understandable and I think you will find that with the stock setup, your response time does not have to be anything extraordinary since it is probably moving about 20in/min or there abouts. I know some (myself included) are looking at changing sprockets/motors to increase this but as of yet I have not had the time.

Part of this is figuring out what you want the failure mode to be.

As bad as it is to burn out a controller board, having a chain come loose and
have the (running) router start swinging around the shop on the other chain
seems like a much more dangerous thing to have happen.

The forces here aren’t that big (66 pounds of force on each motor), it should be
pretty easy to make it so that the worst thing that happens is that the system
stalls, and nothing bends or breaks.

Having a bolt that breaks under force is good when not having the bolt break
will cause something else to break instead, but when the movement is slow like
on the maslow, having the motors stall is better than having anything break.

having the motors stall is better than having anything break.

Agreed!
I previously got the impression that the motor would never stall without breaking itself, or something else.

I don’t see anybody suggesting a fuse inline with the motor. Measure or look up the stalled motor current and use a slow blow fuse around that value, maybe? It might take some testing with the pull-tight part of calibration to verify that’ll work

I seem to have burnt the left motor after the first calibration with TLE5206.
The strange thing is that I was able to cut some parts after the calibration, last weekend and this weekend the motor doesn´t work anymore (motor test actually passes but the motor moves very slowly).

I’m not using standard motors. Maybe the motor is the weakest link in my case.

I definitely need to try something like the fuse solution.

This is the same observation I had when switching to the TLE5206.
My guess is that the original shield or the power supply never get the motor to stall like the TLE.
What is the A out of your power supply?

6 Amps
Isn’t there a way to electrically limit the motor torque?

no, you can adjust the voltage you send to the motor, and you have the encoder
to tell you how far the motor moves, but you have no way of measuring the torque
the motor generates

different motors (even in the same model) will produce different amounts of
torque for the same power.

but the problem is that the motors draw more current when they stall than when
they are running, and the board has no way to measure the current that’s being
drawn. If too much current is drawn, the chips get too hot and are destroyed.

the new boards use a chip that self-regulates when they get hot.

Could 2 of the aux ports be converted to current sense ports for the motors? Using something like this connected in series to the motors should allow the arduino to sense the current draw of the motor. 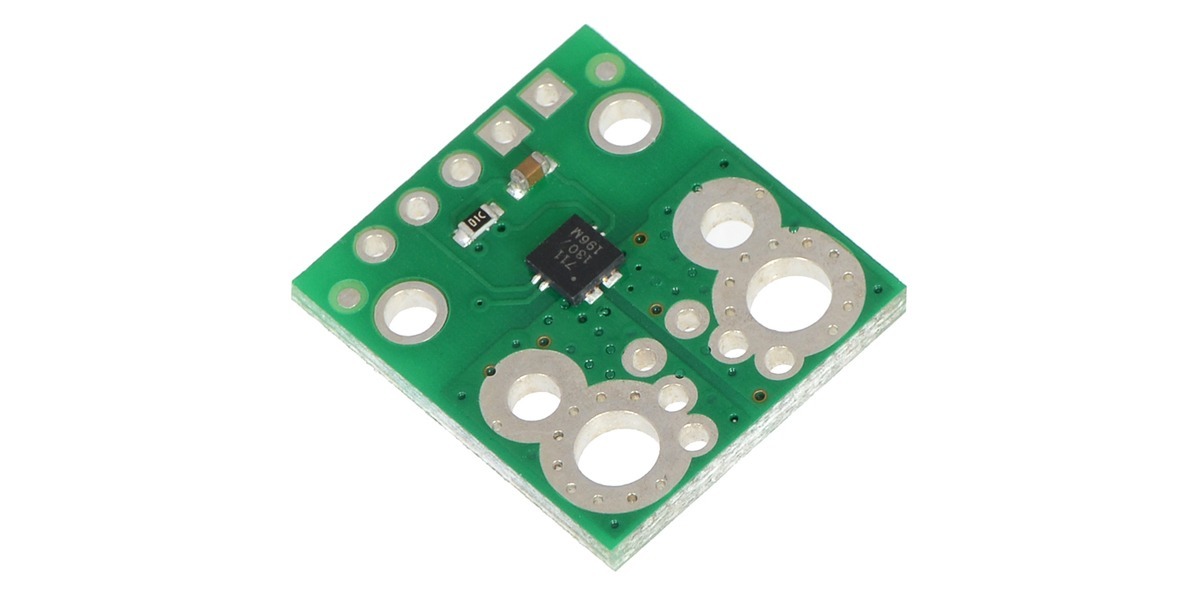 This board is a simple carrier of Allegro’s ±15.5 A ACS711 Hall effect-based linear current sensor with overcurrent fault output, which offers a low-resistance (~0.6 mΩ) current path and electrical isolation up to 100 V. This version accepts a...

If they work as expected, maybe the next revision of the board could even have these chips already hooked up for current sensing to the primary motor ports.

those chips require an analog input to read, the arduino only has one analog
input (and it doesn’t go to the aux pins), so those chips couldn’t be used.

Yes, something could be done in a future board, but we already have a second
design that has controller chips that will self-limit so they don’t burn out. If
you have that, what benefit do you get from also sensing the current?

The arduino mega has 15 analog pins, are we already using all but one of them? I thought aux port 5 and 6 were both analog?

Oh, and as for the reason for doing it when the drivers have temperature limiting, because if you have really good heatsinks on your drivers, it might be possible to actually overdrive the motors themselves without overheating the drivers. A current sensor would protect both the driver and the motor.

The current sense boards i linked above are actually a bit over powered for our needs, there is a high resolution 2.5A max sensor that might work better, but it is 3.3-4.5v max, and not available on a breakout board, so wouldn’t work with the aux ports as they are 5V. but for actual board design, assuming we plan on staying with drivers and motors that max out under 2.5A, the ACS70331 might be worth looking at, if someone wanted to incorporate this. https://www.allegromicro.com/en/Products/Current-Sensor-ICs/Zero-To-Fifty-Amp-Integrated-Conductor-Sensor-ICs/ACS70331.aspx

Inputs or outputs? (I could be mixing up the chips)

but again, other than trying to avoid buring out the chips, what are you trying
to solve by measuring the current?

Actually, 16 analog in ports according to mouser.

Ok, I must have been mixing it up with another chip.

I must say I apparently burnt a motor with the calibration process so I would be happy to have this sort of protection.
Not to say that I saw the structure deform at least 10mm and I don’t really understand what sense does it make to measure the distance between motors after deforming the structure in such way.

Measuring the current on with PWM driven motors has it’s unique challenge. A starting and end point for me was https://www.baldengineer.com/measure-pwm-current.html
To me it looks like I would need a second arduino using algorithms to calculate the current. That’s where I opt out.

However, do we need to run the left motor at full power for calibrating?
I think we don’t. It was an ambitious attempt to try to let the Maslow measure the motor distance, but the goal to measure better then by hand is not achieved.
We could totally skip that step until it can give better results, perhaps with a 1/4 power pull and added chain sag calculation to get a measurement that is at least close to the human error of +/- 1mm.
A full chain (~11ft) pulled hand tight (~1kg) stretches ~2mm with a 15 kg dumbbell. Even a wall mounted frame, sandwiched ->4x4, multiplex, 4x4<- has a flex of ~2mm on the full power ~30kg ‘pull tight’.
My abused chains show no length difference, but others have reported noticeable differences, so the chain stretch is to variable to adjust in the code. The differences in the flex of different frames is another variable that is to wide to account for, to get a usable measurement.

This left motor full power pull could be responsible for failing original shields, power supply and gears.
For the original shield the limits where chosen very narrow to keep the cost down. Small manufacturing differences could be the explanation why some shields run (perhaps a lighter sled) and others fail.
A big issue with the original shield is that it can reach a stage like ‘a liitle fried’ and pretend to be OK but giving unpredictable results. (In my case 1 out of 3). 2 I fried and 1 pretends to be OK but clearly fails on predictable results.

While the TLE will deal with the pull tight, it’s still unnecessary to put shield/motor/chains though the full power task. With the second heaviest sled ~15kg is the max power that would be needed to pull my sled up if it was directly under a motor. That’s 1/2 of what is applied during the distance measurement. If this would be continued to be developed, that’s the max I would target and with the Ridged router it could be even less.

I agree that until we figure out how to get better results, we could cut the
power

but I will point out that the ‘j hook’ on horizontal cuts near the top is when
full power is being applied to the motor pulling, and it’s still not keeping up.

Since I switched both, to a 10A power supply and to the TLE at the same time, I can’t tell for sure what got rid of my ‘j hooks’ at the top. From what I’ve seen is that

My first frame and motor mounts survived ‘feels like 100+’ calibrations with 3 original V1.1 and v1.2 shields.
The first attempt to measure the motor distance with the TLE just bent and twisted my motor mounts.
Is was not before I reinforced my frame and redesigned the motor mounting that I would acutually hear the motor stall with a series of beeps.

Is it possible to cut the test shape in the end of the automatic calibration procedure in order to refine the measurements, after making a manual calibration?