I am loving my Maslow CNC and its capabilities. Unfortunately one of my left motor gears has failed after only 4 months of weekend use. I see that is is becoming a more common problem. I suspect we will start to see a lot more gear failures due to the many Maslow machines that have been sold lately. I have a few projects that I’m doing for other people, so I am trying to come up with a quick temporary fix. I have considered 3D printing a gear, but 3D printed part are just not strong enough. So I am attempting to make a resin gear and test its capabilities. 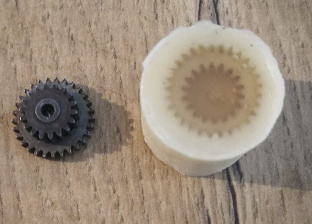 After cleaning the gear, one can clearly see that it is failing in one rotation direction. 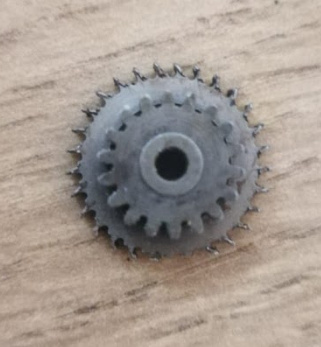 I am not very keen to buy the same motor again, knowing the lack of quality of the gear. Has anyone tried a different motor? Have another solution to this problem. @bar do you still have some spare gears?

Although the number of kits sold seems to be ~ 3000 making 6000 motors (excluding Z), the gear failure ratio seems low in comparison. 6 to 6000? @bar might have a better number. No one knows how many of the kits are actually running. It would be interesting. Also good to know is, if it is more or always the left motor failing.
From the feeling created by following the forum I assume less gear failures with the first batches and increasing reading about it with the last.
A nice point raised to ask: Who is making spare gears in higher quality. I’ll buy some.

Not sure if you’ve seen this thread but there is some talk about lack of lubricant in the gear box.

@Jayster the motors has been lubricated adequately 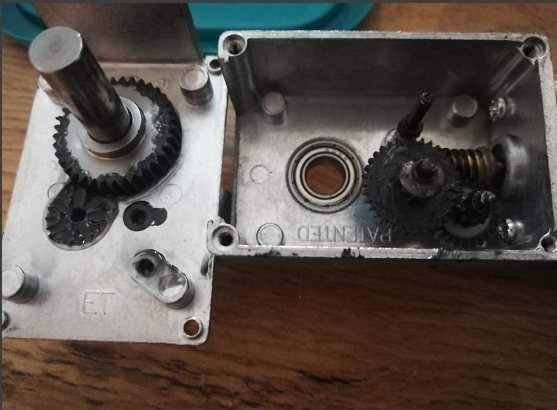 My first attempt at a resin cast gear, not fully cured yet. 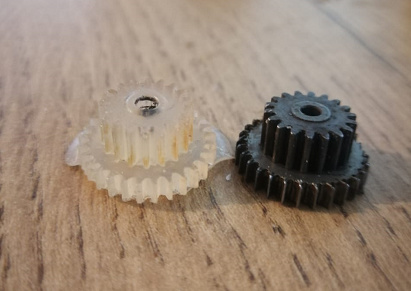 I’m under the suspicion that calibration has something to do with it. When retracting while measuring the distance between the motors, it retracts on left… Quite violently.

@bar do you still have some spare gears?

I do! If you send your address to info@maslowcnc.com I’ll get some in the mail for you ASAP

I just emailed my address. Thank you very much Bar, you guys are the best.

That may be one of the causes for the gear to fail. I only did 4 pull chains calibrations.

No one knows how many of the kits are actually running.

I did a non scientific poll on the maslow facebook group and about 50% hadn’t built it yet, but that is very small sample, maybe 50 people responded if that.

A nice point raised to ask: Who is making spare gears in higher quality. I’ll buy some.

I’m inclined to agree with this thought. Could be over stressing the teeth during that measurement.

Could you estimate the number of hours of actual use over those four months?

The grease in my motors (what little there is) is clear to white opaque. Unless they used a different kind in yours, I’m suspecting that the grayish color of yours is the worn gear material. In which case it is no longer a lubricant but an abrasive.

These teeth are severly worn, to the point the are so thin they are bending or failing under load. I noticed similar wear on the gears in the other post as well. You mentioned you only did 4 pull chain calibrations. Question for the group is can such a small number of of high stress operations result in this kind of tooth wear? If the calibration procedure was the sole culprit then I would expect broken teeth and not necessarily the heavy wear.

I’ve had the exact same problem than @Red_Peter with my left motor also. It was still going clockwise but crashed each time I’ve tried to go counterclockwise. the only fix i’ve found was to replace the motor.

To contribute :
Before my motor fell apart, i’ve did at least 3 dozen of chain pulls to calibrate (issue with a curved line on top) and 3 weeks of cutting (at least 8 hours/day)
I am using the Maslow to build escape game devices, thus the number of hours spent on it.
The lubricant was as black as @Red_Peter’s and the teeth of the gears looked similar.

Question for the group is can such a small number of of high stress operations result in this kind of tooth wear?

I’ve done the operation only once. But it was like a savage wildling crashing full speed in a wall with a knife between its teeth. Doing it 4 times, I would not be surprised the wildling loses a tooth or two.
Put that in the mixer and apply some pressure… It’s disaster waiting to happen.

I’ve done ‘feels like’ ~100 calibrations with ‘pull tight’. Running the first motors for 17 months but mainly on test with no long running hours.
The github shows a 30kg torque and the manufacturer page up to 82kg.
From the speed I guess the motors I revived as spares have 50kg.
It is confirmed now that I’m stalling the left motor with the TLE5206 on ‘pull tight’ and the motor confirms the stalling with a beeping noise device.
Measuring the amps is challenging with PWM because you need to do some logarithmic assumptions to get near real life values from what I read.
The full power on the left motor for 3 seconds to measure something I measure better by hand is worth a change. It can be destructive not only to the gears. Motor-shields (how many amps are actually flowing?), chains (length), power supply.

you do want to stretch the chains. We need to measure the difference between the
chains under tension and the theoretical chain length to know what the chain
slop is.

you also want to be able to see if the frame flexes under load or not.

If the power supply and motor shield can’t handle this load, they are
under-sized.

Now, the current calibration is not great. you don’t want to snap from 0 power
to full power (especially if you have slack)

But you should also be pulling with both motors.

so what should be happening is

I disagree with this assessment

Kindly let me know what you disagree on.
Under 15 kg the chains stretch ~2mm.
What is wrong with wanting to know how much torque (kg) and amps (A) is on the ‘pull tight’?

I disagree with this assessment

Kindly let me know what you disagree on.

that’s a new chain, a worn chain can stretch more

What is wrong with wanting to know how much torque (kg) and amps (A) is on the ‘pull tight’?

nothing wrong with knowing.

that we shouldn’t be pulling

We could if it was based on a amp measure or on the stall noise that we now know is there.

that’s a new chain, a worn chain can stretch more

I did the 15kg test with my 2 old and with my new chains.
Same length, same stretch.

I am 12mm off with the motor distance measured by GC and the first to create a stall noise from the motors. My frame was modded to not flex and does by 2mm on the ‘pull tight’ with the TLE5206.