A link to transfer a picture to wood

I liked this video .
My Makermade cnc logo will be added to my Maslow frame using this technique.
I could imagine doing so much with adding this to projects.

I’ve used this method a few times as well. It’s fantastic and easy. Here is one I did for my nephew’s graduation on a flag: 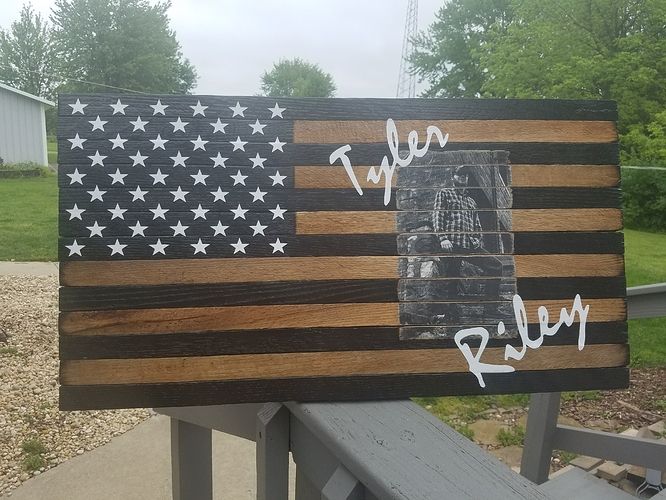 Looks amazing… How’s it all done?

Thanks! As for directions I feel it would be easier to give you a link to video of similar process. The image transfer is much like the video in original post with the exception that I used a black and white photocopy of my picture from a laser copier. The flag is much like this video. However before burning process I clamped all boards together in their flag orientation so I could transfer image over. After following directions like the video from original post you’ll have your board’s clamped with your image but you should run a razor blade between the boards to separate each board where the image is. After that I lightly sanded the edges of each board where the image was to remove any loose pieces. Then you go back to following the steps of the flag video. The image you transferred is a bit fire resistant so you can torch up to image no problem but not for very long. After burning I like to take a clean rag and wipe down the burnt boards to remove loose carbon to prevent my poly from peeling. After image transfer, flag burning, and assembly I did a coat of poly before doing my stars and name. Also I didn’t do the stars like in this video I used stars I cut out of vinyl on my cricut. The name of my nephew was done the same way as stars. After vinyl it’s another coat of poly.

My apologies I’m not good with giving directions however if you have anymore questions I’ll do my best to try to answer.