A question about adding bottom motors

I’ve been watching the Maslow since just after the kickstarter ended and have been thinking about building one. The ability to get accuracy toward the edges of the sheet as well as to take the extra brick weight off the router sled and move it elsewhere has me wondering about a possible modification. How hard would it be to add a motor to the bottom corners? An extra idler on a wider bottom support board would allow the bottom corner motor mountings to sweep up so it might not have to increase overall height. the bottom sled mountings could be attached to a center point on the bottom that allows the bottom chain to be temporarily disconnected with ease for loading sheet stock into the machine. The extra bricks should not be needed for weight.

it would require a different controller board, two additional motors, and it
would need extra height to ge the chains to good angles.

not to mention the different requirements for the math to drive the machine.

It would roughly double the cost of the kit and make the machine taller.

Yes, it would make the machine able to move faster, but once you start talking
$1000+ for a machine, it cuts a lot of people out of it being affordable.

My concern was less about speed and more about ensuring positional accuracy toward the edges of the work space. I realize that it would double the mechanical cost and add at minimum 12" to the overall height to allow for sled overrun. I guess I was just wondering mostly about the controller and software modifications and pondering if the additional outlay would be worth the potential improvement in overall accuracy. I was thinking that being held by 4 points would keep shifting due to feed issues lower.

the biggest improvement to accuracy is to get one of the linkage kits (or make
one), once you do that, you end up somewhere near ± 1mm even in the bottom
corners. Once we get things reliable there, we need to figure out a way to
account for chain sag (or just add extra weight to the sled)

That is FAR less work that recreating the entire machine to handle two extra
motors.

There are some ideas being floated about using semi-accurate motors with an elastic connection to the sled at the bottom. The main goal is to reduce the chain sag, which can be done (at least to a certain extent) by adding weight as David mentioned. Technically you can’t completely get rid of chain sag but it can theoretically be reduced to a tolerable amount.

Have played with the idea of ​​adding a few pulleys and use the tightening that is already being generated by the chain? 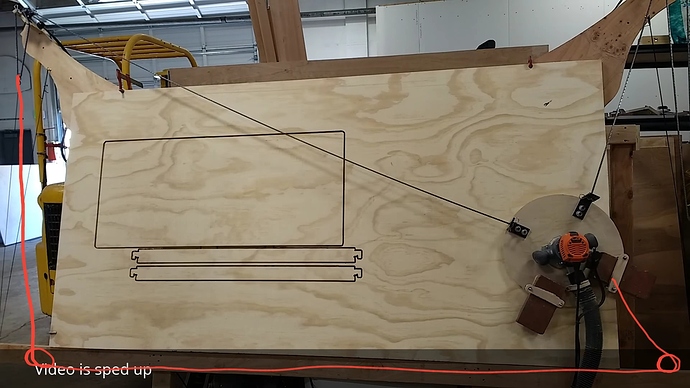 Yes, this is the idea that I suggested in another thread but it has not been tested. I think it has potential to work but still has the problem that you want the tension to be the greatest when the tensioner is at it’s shortest. Basically this design creates two loops with the sled in the middle of each loop. Looking at only the left motor (as you’ve illustrated) the sled positions in which the loop is the shortest is on a straight line between the motor and it’s diagonal tensioner (upper left to lower right). Anywhere else on the work piece that you want the sled to move that loop will have to increase in length (i.e. stretch). For instance, if the sled is in the position that you’ve illustrated above the left loop (the one you drew in) will be at it’s shortest but the right loop (the one that is not drawn into this picture) will be nearly at it’s longest. This means that the tension of the left loop will need to overcome the tension of the right loop - but only in this position. So it stands to reason that two loops with balanced (static) tension might not be able to reach the entire workpiece. A method of dynamic tensioning could be possible though…

I intend to eventually build a small scale model and play with it so I can get my head around some of the forces involved.

My concern was less about speed and more about ensuring positional accuracy toward the edges of the work space.

It might be more easy and less expensive to build a slightly larger Maslow (say 4 meters wide) If you have that much space available.

I wonder if the accuracy near the edges could be increased by slowing down the machine a bit. Giving it more time to chip away the wood.

Right now our biggest problems with accuracy are:

we haven’t licked the first two yet, once we do that, we need to figure a way to
measure the third, then it’s easy to fix.

Once we are at that point, we can measure what our accuracy really is and figure
out what we need to try and fix.

But until we fix calibration, we can’t really start to address the chain sag
problem, because we won’t know if we are measuing the results of sag, or the
results of bad calibration.

Thank you all for the info. I do have the potential for space to make the overall machine larger. For now i’m going to keep sitting on the fence and watching this machine as you guys work on 1, and 2. That elastic bit with a couple of pulleys assisting against the chain sag does look interesting. I did purchase one of those 3018 hobby desktop cnc machines for now to work my way through the pitfalls of learning cnc milling/routing. I’m working on more smallish projects at the moment.