Altering Frame on the fly for move!

I have decided to move my Maslow into a snug pocket in the back of my shop!
Despite the small footprint design of the maslow setup, It has been a challenge to be productive with other aspects in my shop with the current configuration.
I have decided to remove the beam as this is the only thing that must be tilted/manipulated in order to reach the destination. The beam (per instructions) has been glued as well as screwed which results in needing to take careful steps to not mess with accuracy later. I will begin with bracing the joints in the current position with wood and screws. Then removing the bracing and cutting off the original beam supports. I will reattach the beam with braces when moved to destination. This, in theory, should ensure that everything is exactly in the same position later. I desire to have it bolt together at these joints but may save that for a future project as I have no immediate plans to move a second time. I propose this to be incorporated in the default design (a hybrid with the bolt together design.) I may represent the minority that would benefit, however.
I almost didn’t post this but thought better of it.
Original joint: 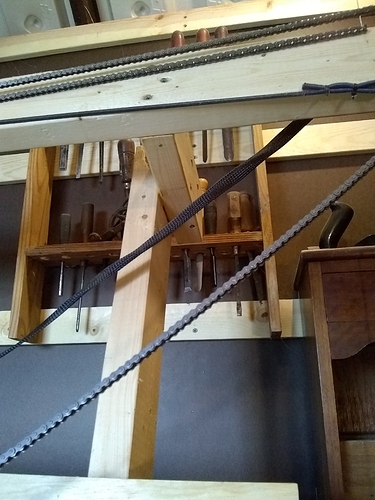 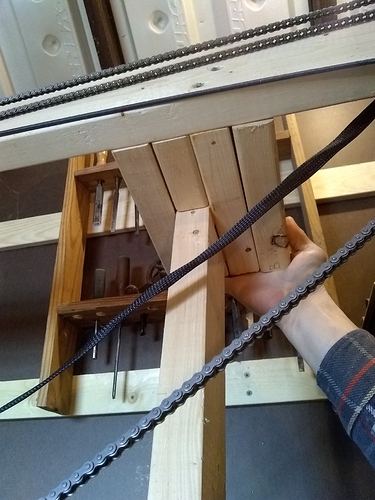 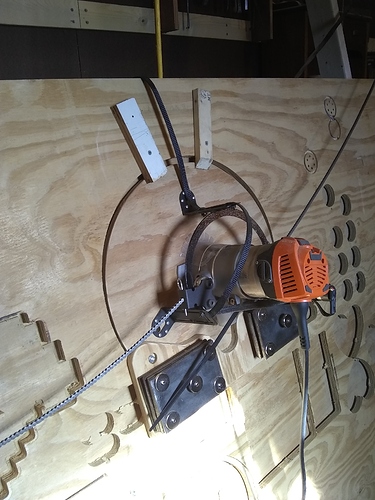 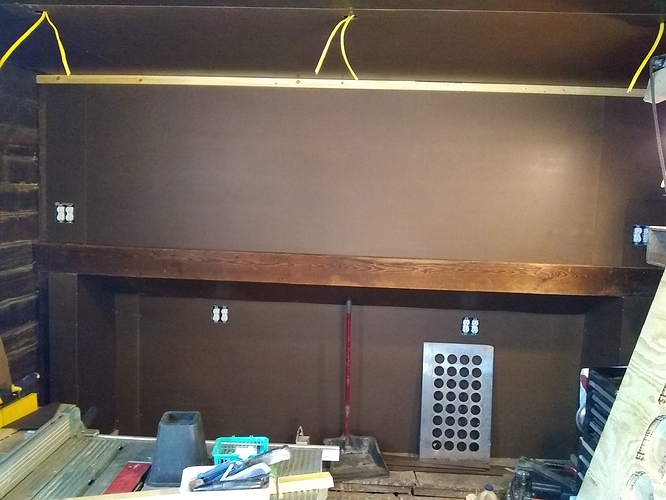 I’m envious of the sixteen receptacles lined up there!

Hopefully they are soon to be hooked up to power but as for now… not much to be envious over!

I have suffered without enough access to receptacles for too long. I figured I’d better install behind the machine before it was basically a fixture there. Boy, is it snug!

Prepping the “beam”, I zip tied the chain onto the sprockets so nothing moves, and I found a great technique for not getting the chain twisted in the move. 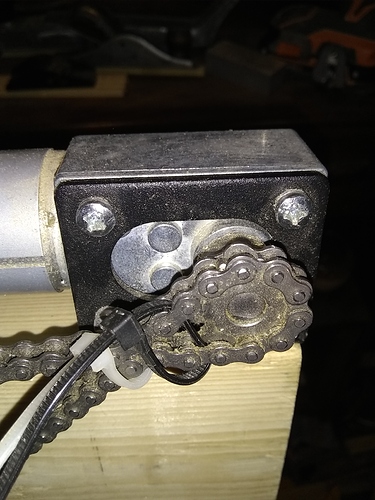 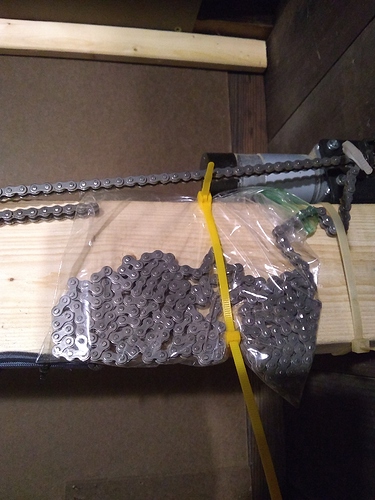 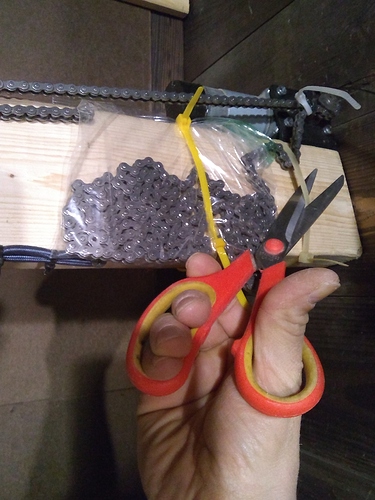 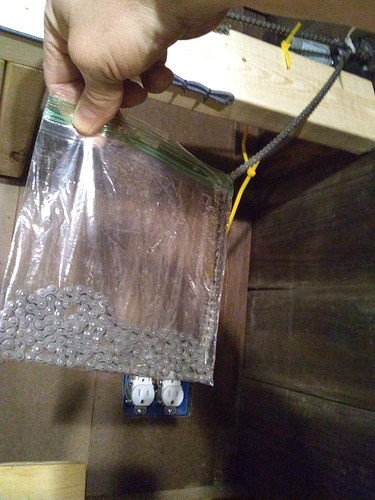 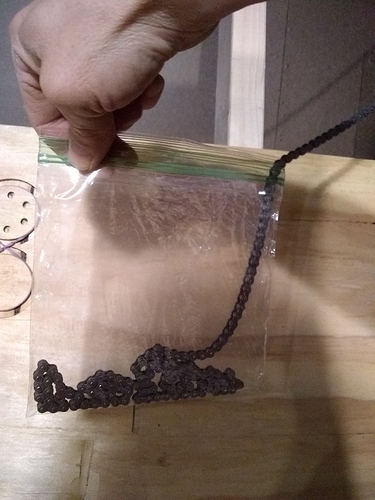 This pic shows the kerf after it is braced, partially re-braced or finally braced (not sure which now as it was quite the “process”): 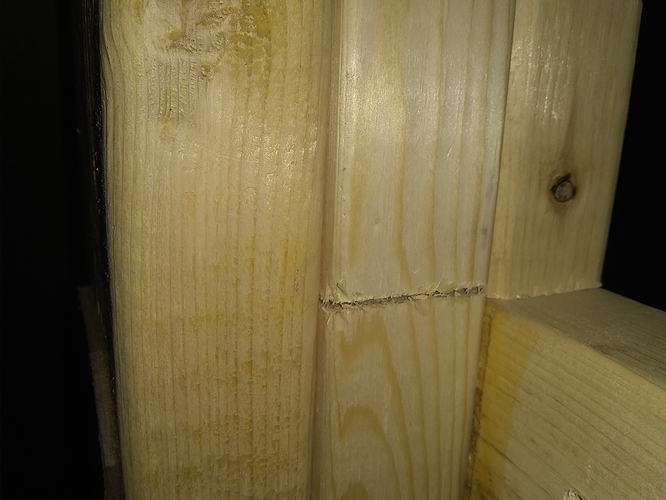 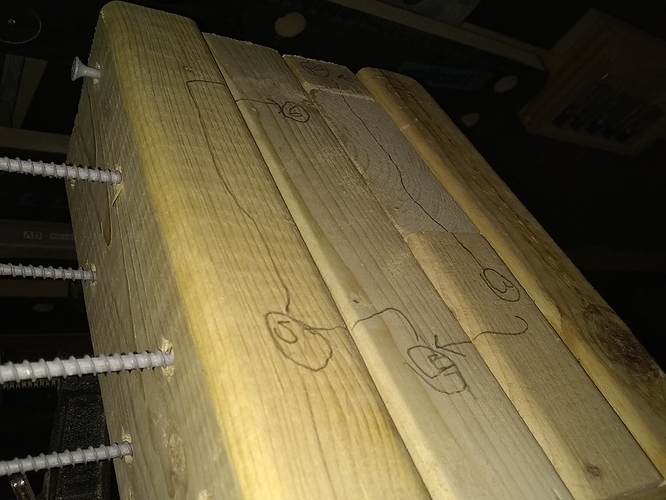 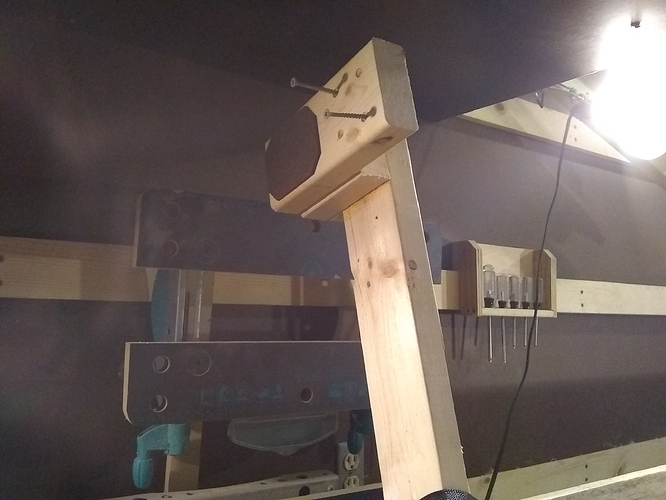 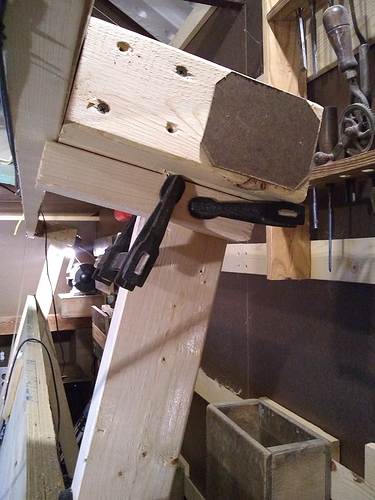 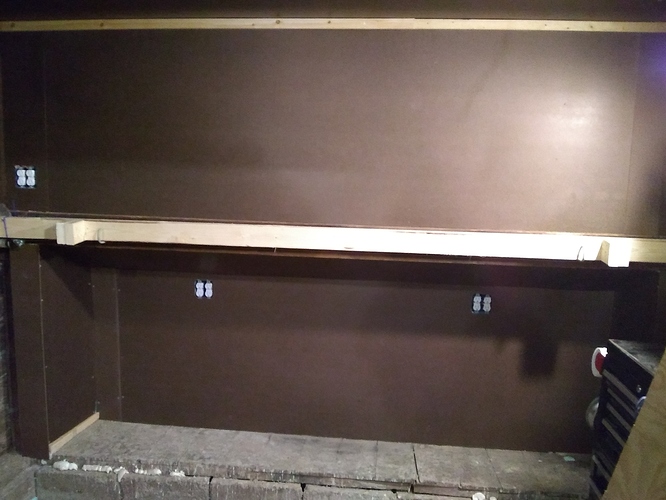 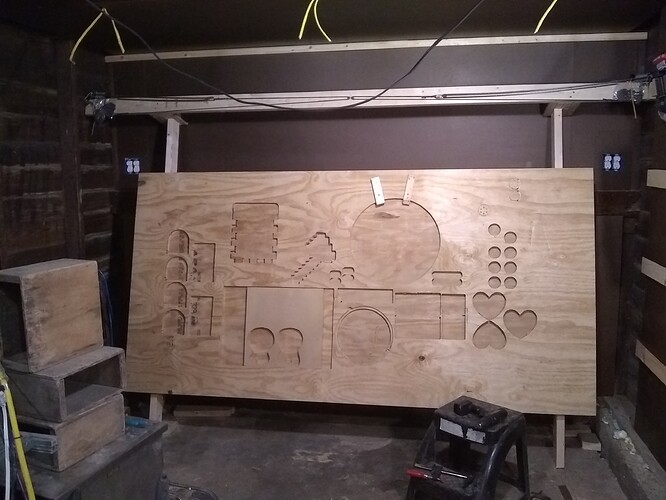 ! I had to roll under it enough for the retrofit.
Let me know if anyone has a good idea about the arduino and shield. I’m thinking a shelf right on the wall behind. My hopes are dust free, access to airflow, & to be able to see all power indicator lights.
Thanks for following thus far. Loving this community and my shop!
1 Like
TheMerryYeoman December 30, 2018, 5:24am #5

Now it is time to move “The Brain”. I started with this empty watch case my son gave me: 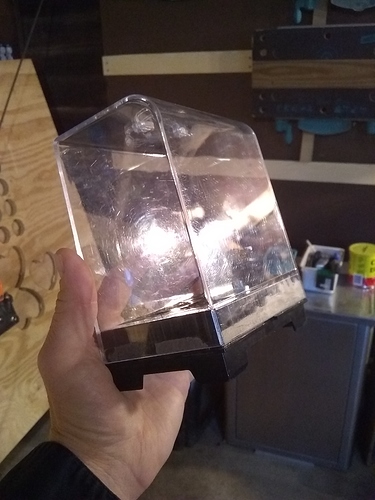 I drilled and cut many holes in the bottom for cables and airflow: 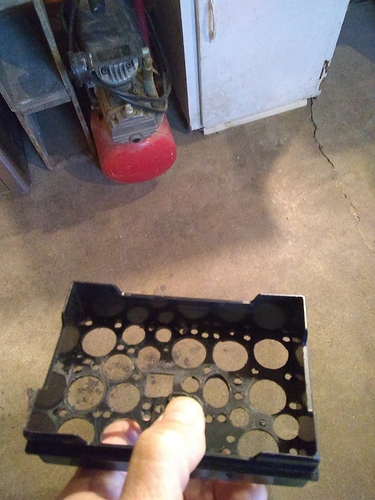 I made a bracket and attached it on the base: 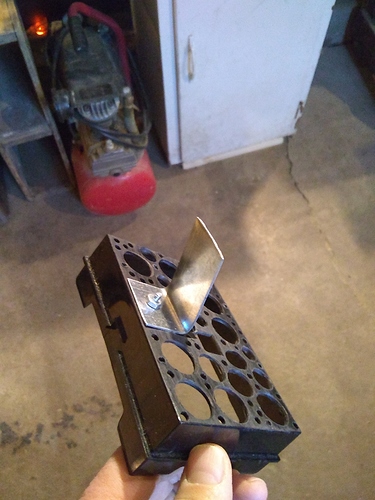 I added a clip to the brain to hold it on the bracket. There’s a clip… on the brain… for the bracket… on the base… over holes…in the bottom of the case… 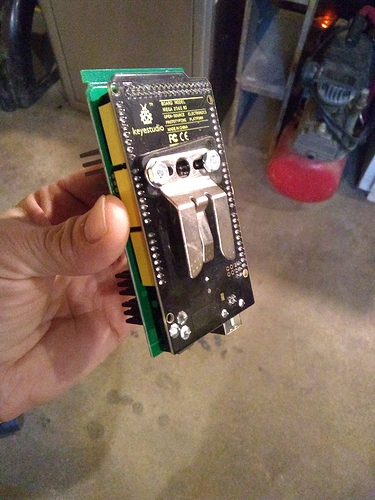 Here it is on the bracket: 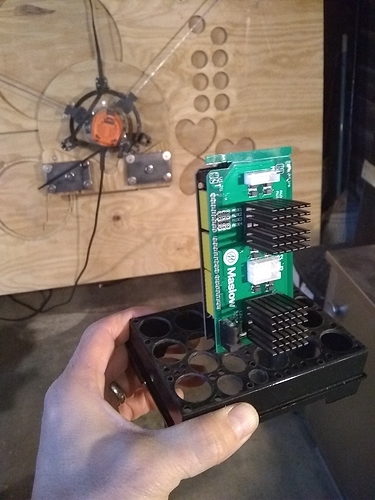 On the underside you can see the access for everything to pass through: 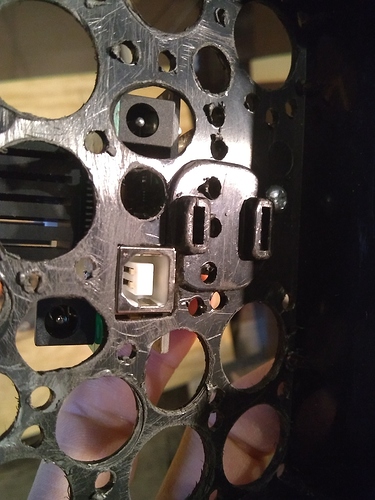 Here it sits on the shelf where it will eventually have everything plugged in from under/ through holes in the shelf.
I also still need to add some holes near the top of the back to ensure heat isn’t trapped in the case and put furnace filter material over holes to block dust: 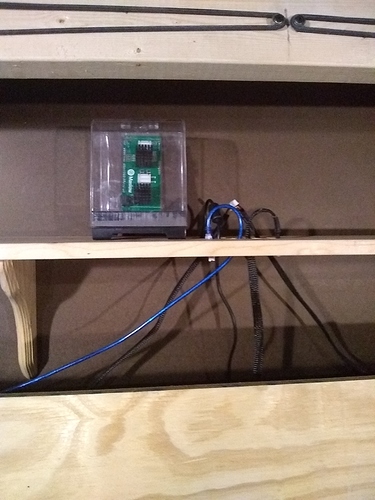 Just Curious… when fitting the brain into the case I was wondering if the tab at the top of the board in this picture is expendable…? I’m not going to alter it but now I just wonder if anyone knows… @bar, @Bee?

Here’s the picture from the “Maslow Electronics” project in the Community Garden. I don’t see the tab there, so I’m guessing on your board it just didn’t get cut off. 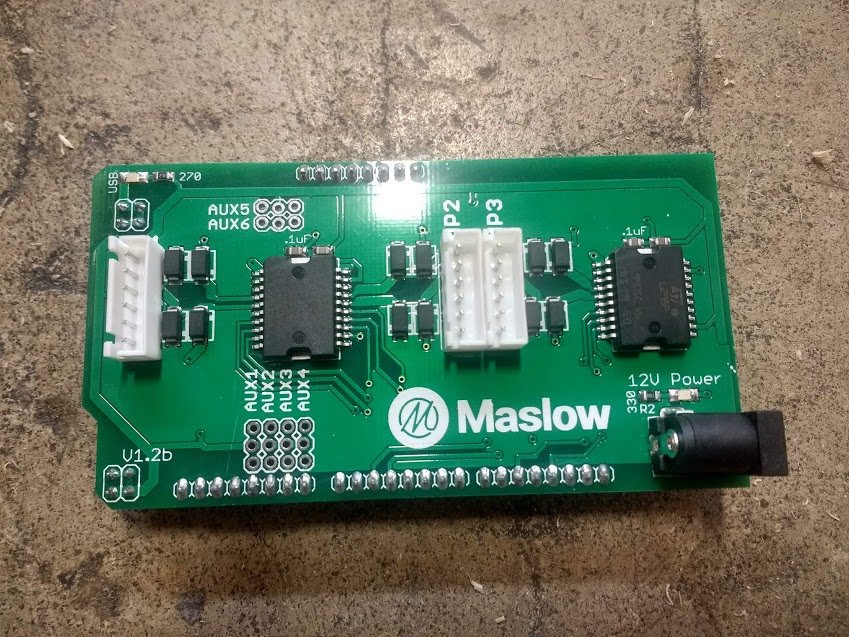 That’s what I’m figuring. I still don’t plan on taking it off because it fits and it is bothering me but I wondered for a while if it would fit. Thanks for friendly feedback!

Yeah, it should be safe to remove. Those were put on there by the factory for QC testing (note the little test contact point on the tab)