Maslow Community Garden
GardenRobot October 28, 2018, 2:39am #1
This is a companion discussion topic for the original entry at http://maslowcommunitygarden.org/Brad-s-3D-Printed-Chain-Guide.html
BradM October 28, 2018, 3:09am #2

I made this after I noticed that the my chains were skipping because the slack end of the chain wasn’t lining up with the motor sprocket. Because the slack end of the chain connects to a bungee which goes around a pulley that is directly on the face of the top beam but the sprocket is about 1 cm in front of the top beam, this is sometimes enough to cause a chain skip. 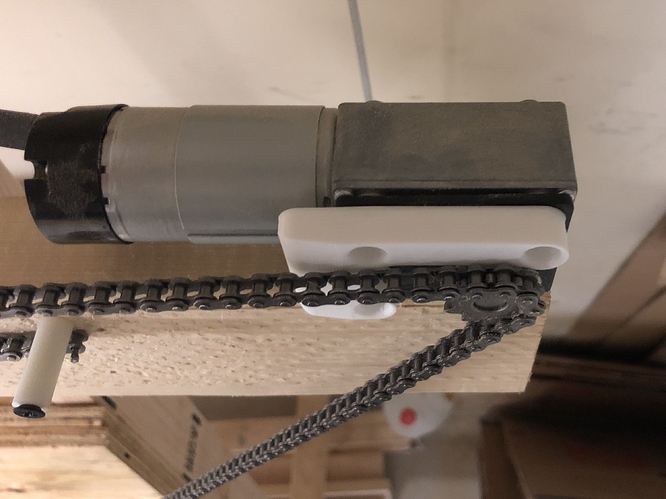 How much tension do you get out of your bungees? The reason I ask is: I have this idea that the tension on the chain tail is what holds the chain from skipping. If there is very little tension, the chain will skip. If there is significant tension, it will not skip.

Does anyone else have any experience with chain skipping, and its relationship with the tension on the tail end of the chain?

It’s more to do with the alignment of the chain than the tension. This is why
the current recommendation is to run the chain across the top beam, you don’t
have gravity pulling it back out of alignment.

If you keep the chain aligned with the angle of the sprockets, you just don’t
have skip to worry about. When they are badly out of alignment (and the roller
chain specs allow for very little misalignment), at the very best you get
extra wear on the chain and sprocket, and you have a really bad fight to prevent
sticking.

The problem I had was that there was (is) a twist in my bungee which cause the slack sprocket (on the s-hook) to be a bit rotated. I could take the bungee off of the s-hook/sprocket and try to untwist it, but then the sprocket would just end up rotated in the opposite direction. This problem was the worst when there was less slack chain (the the bungee near it’s most tensioned) because the s-hook sprocket was closest to the motor sprocket. Because that s-hook sprocket is still rotated and there’s not enough distance between it and the motor sprocket, so that misalignment caused the chain to skip.

I also had some chain sticking problems but that’s mostly fixed now by switching to a weight tensioning system instead of bungees (though the slack-sprocket-rotation issue still happens without these chain guides).

yet another reason to try weights instead of bungees

how do you use weights instead of the bungees?

There are far better designed ways here in the Forum, but cheap and ugly is here: Poor man weight chain tensioning