Browser based gcode optimizer and previewer

Browsing around the forums today and just found out about gcode optimizers, which is definitely a game changer. Wish I knew about optimizing the gcodes I would get from makercam a long time ago. I gather this is also referred to as post processing. There are some posts here and there that mention the use of optimizers but I can’t find anything as the definitive go-to browser based gcode optimizer. Any suggestions?

I found a link to an optimizer from xyzbots and messed around with it using some of my old cuts. It does its thing and I can get an optimized file. However, I can’t see what the optimized paths actually look like. I saw mentions in the forums about gcode previewers as well. Are there any browser based previewers out there that is good to use? Thanks!

What is meant by optimize? 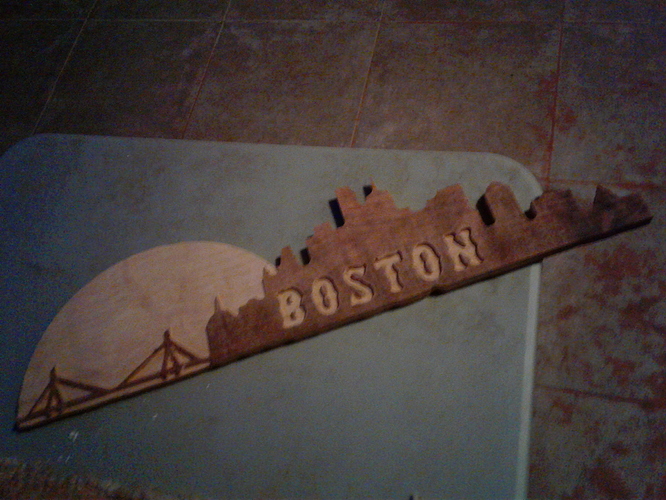 This is a cut I recently made which took about 2 hours, where, if optimized, would have maybe been 30 minutes. So the outside profile was straight forward, something we all have cut, 1 path and 1 depth all the way around and then more passes around at a deeper depth until it gets cut all the way through, unless you put in tabs, which I don’t.

As for the the engraving parts, like the lettering, the gcode that I generate from makercam has the router make much more depth adjustments going up and down than is needed. For example, it would start engraving out the “B” at .25 inches and only engrave half of it. Then it will have the router come back up to the +.5 in safety height and move over randomly to the “T”. Then start engraving at .25 inches again, and only complete like only the left part of the top corner, only to come back up the safety height to move over to another random letter. And I should mention that I don’t have z-axis controller and I manually do all of the depth adjustments.

Ideally, rather than having like 3-4 or whatever random depth adjustments between each letter, it should just engrave out each letter one at a time and have 1 depth adjustment between each letter. Optimizing or post processing does exactly this. There are some options out there but I like the accessibility of browser based applications, like makercam, because I work on my projects on different computers with different operating systems and software. I dug around these forums for one and found http://xyzbots.com/gcode-optimizer/

It’s pretty easy to use. It doesn’t have a good previewer, but the link clintloggins posted does. I ran my gcode for the boston lettering through the optimizer and looked at the paths in the previewer. It’s not perfect, like it still does 3 depth adjustments for the “B”, but it’s a lot better. Even for the engraving for the sun was cleaned up to be just one depth and one pass. Between these 2 applications, I think I’m much better off and can start on the next project with less frustration. Thanks!

I too got very frustrated when I cut out a American flag, same thing was happening where it moved all over the place rather then finishing in one place first before moving to the next cut, this project took over 4 hours to complete, way to long if you ask me.

I had read other post with this optimizer link and tried to upload a gcode file in it, at lest i think it was a gcode
file its the file from makercam with the extension .NC, when I uploaded and pressed the start button it seemed to work by connecting all the dots, but when I tried to save the optimized gcode I get a pop up that says i need to upload gcode.
Hopefully this all makes sense to you

can you help and tell me what am I doing wrong.

@garru2 One thing that I believe I have learned (anyone, please correct me if I’m wrong)… If you were to select all of the stars in your American flag as one operation, selecting them at the same time, the step down will apply to all of them. Henceforth z-axis and traverse unnecessary for so much time and distance. If, however, you take the time in design and assign an operation number to each star… The machine will finish the step down within each operation before moving to the next. I also noticed that as random as mine seemed to select where to go, I hadn’t noticed that I was the one who didn’t pay attention to the pattern when I was in “get-R-done” mode. This optimizer sounds awesome, but before I knew about the possibility, dividing the overall depth of the operation by an equal amount of “reasonable depth of passes” also seemed to save time with a nice result. You don’t risk going too deep only to have the machine take a rinky dink pass at the end (taking the same amount of time anyway) due to lack of attention to detail.
I hope I explained this well and if there are any other things that these optimizers know how to do, I would like to know! They sound smart.

When I followed the sled cut-out instructions for MakerCAM it caused the same thing – all four of the counter bored holes for the carriage bolts were cut out in layers with the router transiting between each hole for each pass. At least I am pretty sure this happened, I was mostly watching chains and weights instead of the cutting pattern but it took a long time. The instructions tell you to select all the shapes together and set the cut depths on them. I’ve just switched to Fusion 360 now so hopefully it does its own optimization already but I’ll have to check what it would do with the same sled files.

Yes, the sled cut out did the same. Admittedly, I was so excited about the accuracy that I felt it was just showcasing its consistency. I believe differently now. It seems pretty standard in the tutorials of CAM software that it saves time in design to group these profiles by highlighting all at once and assigning a value to all of them once and for all. However, taking the time pre-cut (ultimately once and for all with the final file) makes Maslow Happy👄… or at least me.

sorry @Bee, says file is too big to upload,

thanks for your reply @TheMerryYeoman, but I don’t understand this statment

If you were to select all of the stars in your American flag as one operation, selecting them at the same time, the step down will apply to all of them. Henceforth z-axis and traverse unnecessary for so much time and distance. If, however, you take the time in design and assign an operation number to each star…

when I cut out the stars and strips I used makercam’s pocket operation around the stars, take a look at the picture below 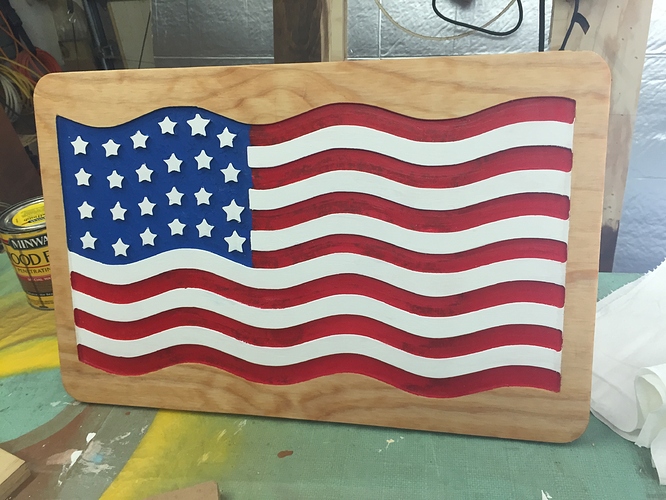 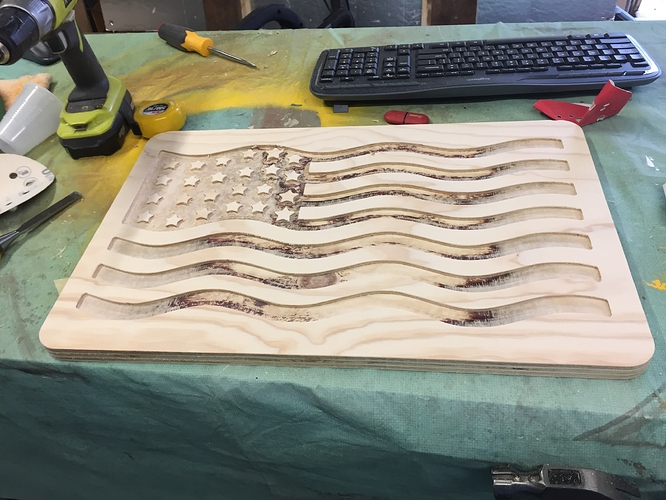 You did not understand my statement because I was mistaken!

I thought the one pocket operation was including all stars going down into the design. This is what I did on a chisel holder I made and learned better. I too, have cut a large pocket operation that seemed to make random gcode, raising and lowering the z unnecessarily. I haven’t figured out what would fix that lest it be this optimizer. I’m excited to find out how that works for me! Nice Flag by the way!

Do you have google drive?

@Bee
No, what about a zip file?
New Compressed (zipped) Folder.zip (22 Bytes)