I am building - for a friend that purchased an early kit from another person - a Maslow with Bar’s Bolt Together Frame. Actually, I built the original temporary frame, only to find the files I needed to cut to finish it were no longer available at the links I had. That was when I discovered that the original frame had been deprecated. I’ve built the bolt together frame, but when I went to mount the chain to the motors, I think I hit a snag…
The original kit has tiny tiny elastic that I don’t think is up to the task of tensioning the chain properly on the frame. Pictures make it appear that the newer kits use a much thicker elastic, perhaps a bungee cord? Any ideas on where I can source this locally?

we have yet to get any comparison report from anyone who has both.

But you really do want a triangulation kit.

“Shared his design”
…do you know where the files are? I’ve access to a laser cutter, so am interested in cutting a set on my own.

Here’s what I ended up with: 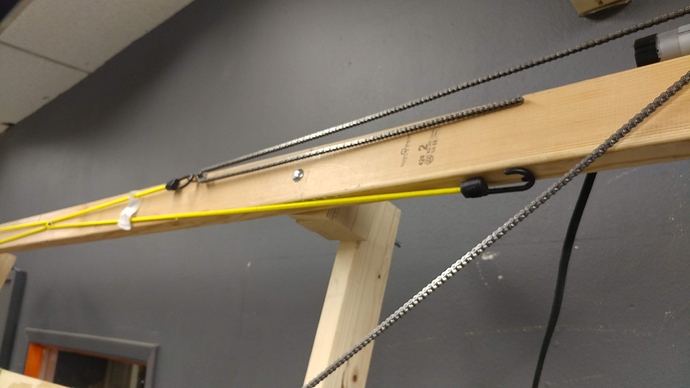 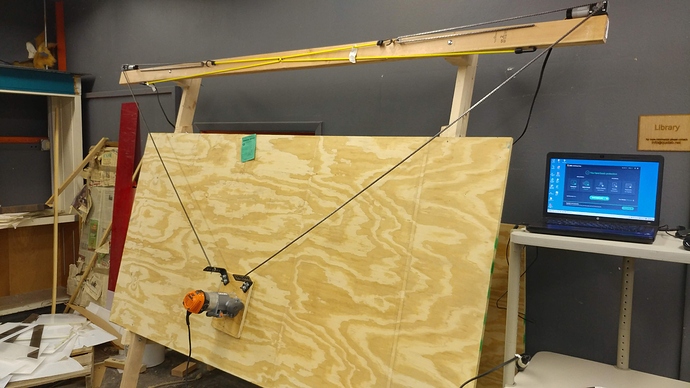 I’m having some frustration with the calibration. I almost had it done before some problems, then when I tried again, the chain started to wrap around the motor gear. Then, I got the “I don’t know chain length” and occasional non-response when I click to extend the chain. At that point, to take a break, I went ahead and upgraded Ground Control (1.04 to 1.25), then the firmware.

It’s odd that sometimes I click a button to extend chain - in the calibration routine, for example - and nothing happens, but if I click actions & test motors, they pass (except for the Z, that’s not yet installed).

I have had major issues and found that if you try to do too much at one time, things do not always come out correct and GC acts weird.

The GC program does not like to go between motor testing and keypad movements (just what I have seen) without performing a manual stop command (Red stop button).

I recommend that you do the following:

1). Get a bit more weight on your sled (it looks too light).
2). Reset the Arduino EEprom. (Clear out any existing chain calibration info in memory).
3). Power down everything (disconnect the USB to power down Arduino).
4). Power up everything, open GC and start calibration first thing.
(If you get the unknown chain length message or any other error message, hit the red stop button before starting calibration.)
5). Once calibration is complete, shut down GC and restart before doing anything else.
6). Open GC and run the motor test.
7). hit the red stop button once the motor test is done. You should be good to go and be able to move the sled around the board using the keypads.

(I recommend that after the motor test is performed you select the RED stop button to set the current position in GC. I have had problems if I try to move sled with keypad after motor test if I did not perform the manual stop command.)

The biggest thing to eliminate chain wrap is to make sure the chains are
parallel to the workpiece/frame not angling forward or back.

YES! A triangulation solution is very much worth it.
As David mentioned there are two main linkage designs being used right now. The top mount and the 45˚ mount. They have been tested against each other, you can read the results here: Triangular Linkage Evaluation Criteria and Measurements however it should be noted that there have been some slight modifications/improvements to the top-mount design since then and it probably performs better now.

I’ll send you a cut-file for the 45˚ kit if you’d like to cut it yourself (it’s on here somewhere but I can send it faster than I can find it!). I would suggest using a 1/4" plywood (not MDF core veneer). The kits I make all use high quality baltic birch. That should be easy with an 80 watt CO2. Alternatively if you’re in a hurry and don’t feel like messing with it, I ship kits same-day (link to kit).

The biggest thing to eliminate chain wrap is to make sure the chains are
parallel to the workpiece/frame not angling forward or back.

Thanks, but this was during the calibration steps, so they were just hanging down. The second or two it took me to click a button on the laptop, and go to the left side of the frame were enough for the link to not come off & start to wrap around! One way to prevent that might be to click the smaller increments, instead of the 1000MM button I hit!

The second or two it took me to click a button on the laptop, and go to the left side of the frame were enough for the link to not come off & start to wrap around!

Been there, done that… many, many times. And my computer was on the left side of the frame. It really likes to wrap around the sprocket.

Slightly off topic, but I found I couldn’t keep my computer on the right side of the frame. The router spin direction throws all the chips and dust to the right side (I don’t have a dust collector attached just yet). The wood dust film collects only on the right chain, which coincidentally was always the one that skipped before I changed to chains-on-top storage.

I’ll probably go ahead and move the workstation to the left side of the frame, and pass that along to the owner when he takes it to his home shop. Thanks, neveroddoreven!

With the help of a buddy, I was able to finish calibration then configuration, and do a test cut of some mountains.

Thanks everyone for the assists! I really appreciate it.

I noticed you are in ABQ. I am interested in buying the M2. Wanted to chat a little since I am new to this hobby, I am not an engineer. But wanting to build some furniture for personal use.

I am also in ABQ. Let me know if you would be open to me asking you some basic questions about your system set up.