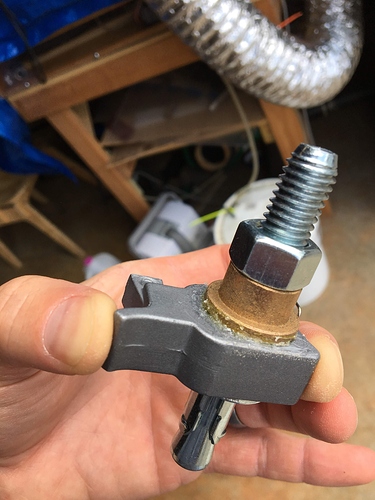 Just like to say thanks for this excellent write up and pictures. I think this should be included in the setup instructions for the Maslow Z-axis kit as the quality of cut from the kit is really not good enough. I’ve only just cut one project so far but there were so many z axis related errors that ruined many pieces. Things like:

Going to try adding a thin bungie cord to get positive down force too.

Thanks again for the effort is creating such a good write up.

The bungee will really improve your z axis performance. What you describe above are all the things the bungee fixes. Just be sure to polish and lubricate all the “metal on metal” surfaces, and carefully adjust the clamp lock to “just loose enough” for smooth operation.

Also consider low-friction tape between the router base and the spindle. 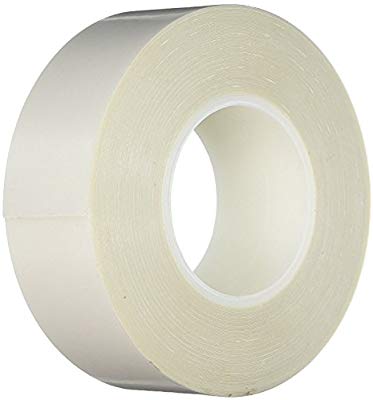 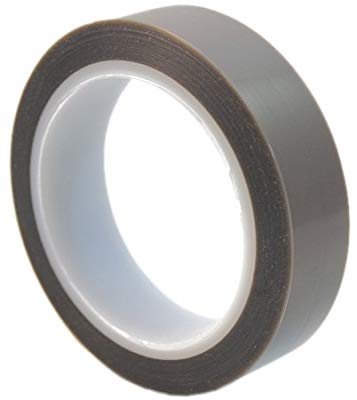 (These are random examples. I have no connection to Amazon or these products)

I’m using a version of the upper one on the spindle body and housing. It works, and I’m happy to use it because oil + sawdust didn’t seem like a great combo. Your need to use a screw and nut to hold the housing slightly more open, it’s not made with enough tolerance for 2 layers of tape. Also make sure the ends of the tape extend out of the housing and to the outside, or eventually the spindle will start peeling up the edge and jam in the housing.

Even with the tape, the worm still has drag with the arm, and the spring isn’t strong enough to counteract it.

I’ve tried rubber bands and bungees to press the arm’s “tooth” into the router’s cutout, but they can’t seem to handle the vibration the router gives off them it’s cutting.

I recently tried forming a ‘C’ out of cardboard and fitting it inside the arm’s spring, between the arm and the route housing. It can move up and back on the router housing with the arm, but prevents the arm from rotating.

It’s not foolproof, though - I’d like to find a good way to “lock” the arm in place, engaged with the router spindle - physical fuse be damned. I’ve stopped short of gorilla glue, though

Thx Dustcloud (love the handle). Just added adjustable bungie for the z-axis. Already had the clamp lock adjusted but added a light coat of teflon lubricant to the metal parts. Hopefully will have all the bases covered now and not collect too much dust. On my previous cuts the z-axis did appear to move freely but the height adjustment mechanism had crazy slop when moving due to flex. The bushing fix has worked wonders for this and I can wait to try it out tomorrow.

Thx sprdad, Will certainly try your tape suggestion if I notice binding in the z-axis movement.

Thx geeklimit, Yes on test runs I noticed that the adjustment arm occasionally popped out of the router core because the clamp lock was too tight. Spent a while adjusting that until it was just lose enough for free movement without the router core tilting when moving.

Even with the tape, the worm still has drag with the arm, and the spring isn’t strong enough to counteract it. I’ve tried rubber bands and bungees to press the arm’s “tooth” into the router’s cutout, but they can’t seem to handle the vibration the router gives off them it’s cutting.

So you still have the ‘arm’ pop out of the router core ‘cutout’? I will keep an eye out on it.
I suspect if I still have issues with z-axis after these fixes then I will try something more drastic like a variant of the Meticulous z-axis (http://maslowcommunitygarden.org/The-Meticulous-Z-Axis.html) which bypasses the whole stock mechanism. The stock mechanism is just not (rightfully) designed for a CNC implementation.

BTW just noticed that this forum does not thread replies so sorry if all you helpfully folk get spammed by my responses.

Here is a thought, drill and tap holes 120 degrees apart in the base. Adjust so the base is very loose then use nylon screws to take up the play. The nylon screws take the place of the tape. It might take 6 or 9 screws with lock nuts.

Thx RustyGirl for the suggestion. Luckily I don’t think I will have exert this level of effort but will certainly use it if I continue to experience Z-axis errors.

Thx again to all for all the useful suggestions. What a great community! After applying bushing fix, washer fix, adjustable bungee on Z-axis, Teflon lubricant, and setting zero Z depth again: I am very happy to say that the z-axis is working within acceptable tolerances.

FYI, I used Tri-Flow Telfon lubricant which dried overnight and did not retain any sawdust when cutting the next day.

Unfortunately I am still getting depth cut errors in drill operations, where it does not drill though completely, but this is also within 1/16" which can be easily removed. I think this is because of the router bit I am using which appears to have a slight taper. It is burning the wood in the last 1/8" when the shaft enters the cutting depth. Will try adjusting the bungee to give a bit more down force but may need to get a bit that has 1" cutting depth.

Overall this is a huge win. Looking forward to re-cutting failed parts.

This is huge as now I do not have to watch the Maslow during cuts, in case the pieces fall out, and cause serious problems.

Not recommended, but if you’re going to do this, buy a smoke alarm and screw it onto the top of the maslow frame over the work plane. If the Maslow loses connectivity to the computer or the bit stops cutting for another reason, the bit will rub the wood at 10K+ RPM and set it on fire while you’re away.