I started testing gcode files and created some test shape sin LibreCAD, then converted with DXF2Gcode. The files display OK in ground control, but they do not seem to run correctly.

One of the files is here:

The resulting ‘cut’ is here: 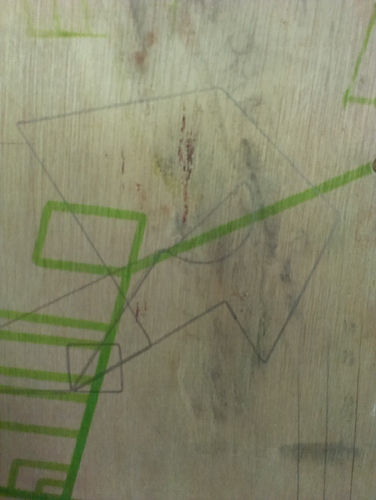 The circle isn’t fully cut and the pencil doesn’t raise for the moves between shapes. The Z moves are in the gcode file, as far as I can see.

I’m using a spring loaded pencil instead of a router bit as it’s quieter, cleaner and uses up less wood. The holder is a spring dropped into a cut off Sharpie, which woorks pretty well for anyone else who is looking for a way to do this. (Cut off sharpies dry out quickly).

I’ve had a search and can’t see anything similar. I’m on 0.85, which was the latest code last time I looked.

The current is 0.90 on firmware and GroundControl. Could you try those and report back?

I’m able to replicate the same behavior on my machine and I’ve opened an issue for the behavior here: https://github.com/MaslowCNC/Firmware/issues/310

Hopefully I can get it tracked down quickly, I’ll let you know when I do.

Ah, it’s good that you can see the problem too, if you see what I mean. At least I’m not going bonkers.

Does GroundControl have an option to give manual GCODES? For testing purposes.

You put them in a macro, unless Bar changed something recently.

If not a command line would be a nice addition…

Here’s a weird new bit of info. This file won’t reload automatically if GC is closed, but if you move to a new location press “define home” then open the file it’s in the right spot.

Not sure if double posting on GitHub and here is ethical. Will do it anyway

Edit: A ‘quickfix’ that works is to open the file in FreeCad and export it as gcode (post processor none). Takes all the spaces out of xyz.

Interestingly I could replicate the file open issue and eliminate it. I edited all double blanks in the code and the error is gone for me. Looks like an evaluation, if this is valid gcode and GroundContol decides to call it invalid and open and cut it anyway.

I’ve seen other references that says spaces are stripped out so an example line compacts to G1X123.4Y234.5Z2.3 no matter how many spaces you put in it.

RS-274X is the definitive reference, but my standardeze is pretty rusty. It says you can only use spaces inside strings, but seems to define strings as the basic command building block. Search and you shall find the standards document

GroundControl has logic to deal with unwanted single spaces but did not expect runs. I’ve opened a PR in GC with a line to replace space runs with a single space to address, leaving the logic unchanged. Testing would be appreciated

Tested and found you did a great job! The PR solves the issue with the file location not stored and the teleportation of the sled.

Pull Request I would say. Guess this will be merged soon.
https://github.com/MaslowCNC/GroundControl/pull/434

Thanks for the rapid test @Gero. I enjoy your new profile picture

How quick we forget, or maybe it’s just old-timers. Thanks!

I bid 1963 and you? IT since the first HP that could be called a PC

Edit 1: Our background sounds from your posts similar and different at the same time. Spock would say: Interesting!
Sorry, getting offtopick now.

Newcomer. First Fortran class (F IV taught from old mimeographed F II sheets) in Spring 1969, 7am before high school. Never actually got to run anything since time on the promised 360/67 at Wayne State (Detroit…) never actually materialized, although I wrote the shortest (by one line) average 10 number program in the class. Actually ran my first program in the summer of '69 on Michigan Tech’s 360/44. Oldest actual machine used was (I think) an SDS 910 that somebody had scrapped and given to the MTU EE department. Learned to punch binary programs in Flexowriter tapes by hand for that one