In addition to the 3D SLS power tool battery adapter printing project I’m running with Xometry, I was so impressed with how easy it was, I dove headlong in to trying them out for CNC milling.

This is all just a little pet project for me, out of my own pocket, to learn about on-demand manufacturing capabilities - so I wanted to share the results with the group as you’ve all been inspiring. I’m not an engineer by trade, nor am I formally trained in CAD/CAM, just self taught this year. I have some business experience overseeing product production and higher level supply chain management and decision making - although it’s relevance to one-off personal projects is minimal.

Until I had run that first SLS print job on Xometry and started poking around, I hadn’t realized they offers CNC milling services. They also seem to offer some sheet metal bending, although it’s all “custom quoted” instead of the neat web “instant quote” for everything else. When I saw they could do T6061 aircraft aluminum, I instantly remembered a project I saw on YouTube where someone made a 3D zeroing block for the ShopBot for their local Maker space. Wheels started turning.

If you use this link to sign-up with Xometry you’ll get a $50 credit towards your first project, which is more than enough to do some nice little shop projects. I’m thinking of making some custom squares and marking rules next, maybe a fence for my Festool-style worktop.

Since I only have access to the ShopBot at my Maker space for short periods of time (3h windows for members), and I have created jobs that required stopping, removing my work piece and coming back a week later to continue, being able to very precisely re-zero the machine to the same point is critical.

I found Ron Olson via YouTube and the video and link to the code of his project to set X/Y/Z to Zero on a ShopBot PRS-Alpha (same machine as I have access to):
Shopbot XYZ Auto Zero Block - Ron Olson

I tried to use the various CAD formats he had, but ended up drawing it from scratch in Fusion 360. Except I worked in mm and he was in inches and I wasn’t confident enough to mill it, so I wrote him and he kindly send me his Fusion 360 model which I used to confirm measurements and update my drawing (for practice). I also modified his, as he did a horizontal threaded socket to plug a headphone style jack in for the conductor wire. Milling like that is more complexity and money (and I haven’t played with threaded holes yet - let alone on Xometry) so I decided to just cut a simple slot in the same area, all the way through. This leaves a nice edge to clip an alligator clip to and makes the complexity lower for production. 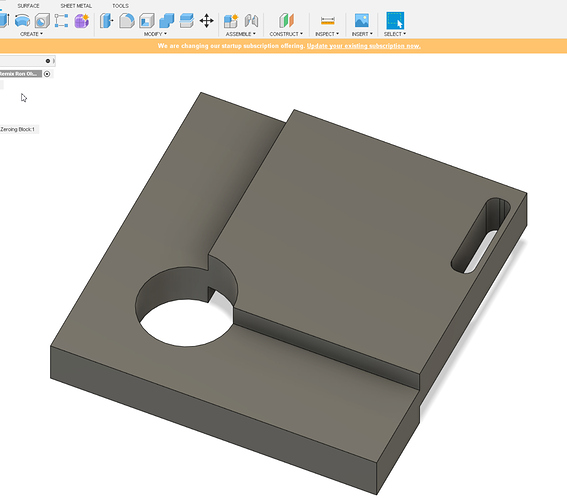 This plate works with the existing Shopbot Z-axis zero plate that connects to the machine and then my (new) alligator lead connects to the stock zero plate and the other end to my new XYZ zero block at the slot in the upper rear corner. The opposite end of the circuit goes to the router bit so when it contacts the block it completes the circuit and signals the code in the shopbot. I’ll be running Ron’s code linked from that youtube post.

In our back and forth we discussed bit diameter offset considerations, which he’s in the process of adding to the code, so it will figure out the bit diameter and adjust accordingly (using the known X or Y length of the block deducted from the measured length along a given access).

I also asked him about skew detection. Obviously you can find zero but if the work piece is skewed relative to the table, for example if you have to remove it mid-job and put it back later, then you can be right about 0,0,0 but still wreck your project. He came up with the great idea of measuring three times in a line while holding position on the opposing axis and determining if the opposing value changed at all. For example Y=12, Y=8, Y=4 all at an intended X=10. Ideally X would be 10 for all three samples. If it is off, especially a substantial amount, you’ve got skew relative to the CNC perceived axis. So that’s something he’s hoping to add in the future.

I was able to watch the video, estimate the sizes, design it in Fusion 360, confirm details with Ron, upload the file to Xometry and put it in to production all in one evening. Admittedly it’s a relatively simple part, but it was still a rush to see that. I just had a heart attack thinking I uploaded an earlier version of the file, but it was just poor file naming conventions on my part. Phew.

Unlike the 3D printing quote which only had two options - express and regular - the CNC milling option for my project offered a third option. (S)Low cost - China (e.g. 3+ weeks). I was intrigued. The quotes were around $250 and $200 for the American option but the chinese option was more like $130 if I was willing to wait. Being a total hobby project (and not having the $50 new sign-up credit) I thought I’d test out the Chinese option. I really only need one for me, but I decided to get one to gift to the Maker space as the have been good to me, and another to give a fellow member there who helped me with Fusion 360 issues.

I did have some concerns about aluminum coming back from China given all the tariff trade-war stuff, but I thought I’d give it a try. Xometry has assured me the price includes all the incoming tarrifs to the US etc. so it should be fine. While they drop ship a lot of their work, despite being told this would drop ship I was thensubsequently told my order would go their office for QA inspection before being forwarded on to me. That annoyed me but it was a green employee who misspoke and it happens… Glad it wasn’t a big commercial order though.

The QA at their office doesn’t affect the timeline I was quoted but does have implications if you are shipping it outside the US, for those who might want to ship to other jurisdictions. Ask ahead of time if you use them to ship outside the US, what paperwork will be involved etc.

The process was pretty much as easy and flawless as it was to submit the 3D printing job. Upload the files, select machining options, materials and finishes, provide any additional detail on threads etc (I didn’t have any threaded holes), select your preferred time/price point and pay. It literally took less than 10 minutes from sign in to the part being in the production queue. And it’s shipping already. Hopefully I’ll have a tracking number on Monday:

Man I just love the Domino’s pizza inspired “this is where your part is” status bar you can access for every open order. And they have detailed parts version tracking (and date and time stamp tracking) so if you upload two similar parts (like I did by accident) you can help determine which one from your library to print.

I should have the parts by next weekend if everything is on time. I’ll post photos of them once they are in my hands. I’m really pumped about the whole thing. In additional to workshop related stuff, it’s got my mind turning about making custom body panels for a resto-mod car project I’ve always wanted to do. Maybe even mix and match some aluminum with some SLS 3D printed stuff.

I’m going to write them and find out maximum sizes they can handle, as a fender is a much bigger ask that that some calibration block. Likewise I’m curious how big their SLS operation can go. I’ll keep you posted. This really opens up a whole new avenue for makers.

Oh and one other thought that has my wheels turning - I am enjoying learning F360 CAD and CAM but boy was it nice to just stop at the CAD stage and know the CAM was included in the price. I haven’t milled metals yet and it’s a whole other world of optimization. Sure it’s fun to do stuff at the Makerspace as one-offs for me but I can move a project along much faster if I can focus on the design and let professional machinists do the CAM programming, as long as the costs are reasonable (and sadly, they were NOT with my local shops that quoted my MFT style worktop - which is what lead me to get on the CNC at the makerspace in the first place). Accessing this level of capability via Xometry even at low quantities is a real game changer for DIYers and Makers especially if CAM itself isn’t your favorite thing.

Feel free to ask me any questions and I’ll gather answers from Xometry and post them here for you.

PS - Is there a place for an XYZ block in the Maslow eco-system?

A quick update… my project is on a truck and working it’s way across the USA.

The first day or two I couldn’t get the tracking number to work so I reached out to Xometry and they said “everything is fine, here is the update from Fedex”. The problem was they had tagged it in their portal and update email as being a USPS tracking number. I should have the pieces Monday or Tuesday and will post some photos.

Good news, Fedex has delivered to the shipping center. I hope to pop over there today and pick it up. Will post photos when available and probably some video of it in action at the Makerspace when I get in there soon. Time to draw up some of my CNC projects that I’m going to do using it.

I’m itching to get out in the shop and make something before the sun sets here, so this is just a teaser image until I can write up a long post and show the caliper measurements etc.

Suffice it to say I’m very impressed with Xometry and the pieces are perfectly smooth and very accurate! I did all this on my own dime out of curiosity. Ask away if you have questions. I’m already thinking about some jigs I might make for cutting drawer joinery on the router table… I am inching closer to making myself a desk.

If you want to try milling or 3D printing something for your shop or one of your other hobbies, you can still get the $50 credit towards your first project by signing up at Xometry here: https://mbsy.co/BWNW9 and feel free to share that link with friends but please don’t abuse it.

I’m hoping to try it out later this week, but may be delayed due to Halloween. More soon.

PS - it is dead square as expected. 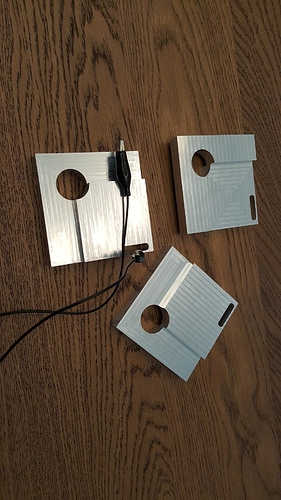