CNC Robot that drives itself around

I’ve had wondering eyes. I love Maslow but I cannot help but dream about other systems. Lately (while watching Maslow cut pieces) I dreamed up the idea of essentially mating a router with a Roomba. You’d set the router on any work surface (laid flat on the ground or a table), turn it on, and let it drive around making cuts. It turns out my dram wasn’t as far fetched as I thought! See here: Goliath - Portable Autonomous CNC Machine - 90 photos - Commercial and industrial equipment supplier -md=1

My call out is this… we need an open source version of this!!!

I’m ready to strap my Rigid router and z-axis to some sort of robot sled that drive around.

The primary problems I could imagine would be a problem are:
1.) cable management. You wouldn’t want the robot to drive over a cord. Ouch!
2.) dust management. Too much dust on the board could cause the wheels to slip and mess up the cut.
3.) location calibration. Seems like a robot would work best of sensors were placed at the corners of any board you put down. That way the robot always knows where it is in space. Plus you wouldn’t need to calibrate the machine. The robot would just watch the markers on each corner and know when it moves, and how far.
4.) the name - I’m thinking Maslow Robo. Ha ha

Cool idea
The website to get a jump on buying one is :
https://comingsoon-tech.com/goliath-autonomous-cnc-machine/
Youtube video is pretty short and not useful 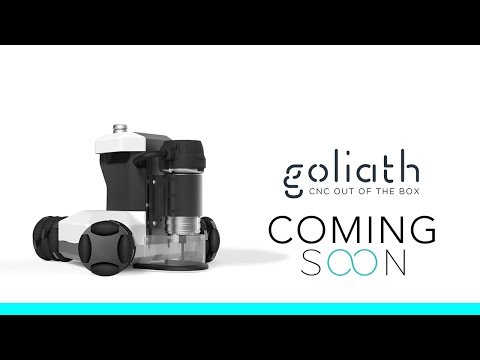 Looks like they use some sort of positioning pillars that are placed on the corners of your work area to guide this thing around.
I do see a couple of problems. One is debris control. As the wheels roll over debris this thing is going to tilt around like a drunk.

We met those guys at Maker Faire, it’s a really really cool idea. There’s a couple technical hurdles that need to get figured out, but I don’t think any of them are impossible to solve.

It’s such an exciting time for new CNC machines!

You could have a goliath like bot combined with the trusty kitchen measuring string machines and it would always know where it was by simply clipping four strings, one for each corner.

I too have been secretly toying with this idea. Though my approach is more of a tank. With 20" tracks on each side. Though I’ve had trouble figuring out where the motors to control any needed lateral motion would mount and drive the tracks. Then I saw the Goliath. Which I think will suffer slightly from the wheels going over cuts. Though their lateral movement design tackles that issue very well. The early bird price on the Goliath is $1,490. So expect a retail of 2k to 2.5k. Cheaper to build a flatbed imho.

The way I was kicking it around it would be solar/ grid chargeable and battery powered (help make it heavy) and the tracks would have a 1.5" - 2" lift/drop ability. So stock could just about be plopped on a levelish/ flat area of the yard and cut.

Had a string of thefts over the last month ( suspect Mooses swamp rats. They must have gotten bored while he was traveling) so my confidence in leaving the Maslow outside has been shook and stalled my plans. I know the sled is removable, but since all my wires have gone missing twice along with other small things, I’m not sure leaving the mega and motors would be safe. Anyway I digress. I figured a CNC tank would be much easier to bring in the house than a full Maslow.

@iRoc999, the drive system baffled me too. I like the solution Goliath came
up with, but I’d like to see how they deal with issues with grooves, and
with sawdust. If they can collect sawdust and keep the work surface clean I
bet it will work pretty well, especially if the cuts include tabs that hold
pieces in place.

Doesn’t it seem like something @bar would want to work on for his next
kickstarter? I’d probably fun it too!

Bummer about the theft. That fractional ounce of copper maybe got them less than a nickel and cost more than that to burn the insulation off

Tracks would certainly deal well with the debris/groove challenges but it’s really tough to get accurate positioning with a track drive system. By design they have to slide as well as drive during a turn so your pivot points are constantly shifting around… I can’t even fathom what that math looks like.

cool idea but it still had a big footprint, as big as the workpeice, where the maslow only needs a 25% footprint.

Where does the dust go, how does it cross the tracks that it has cut without making wonky moves.

I think it has a long way to go before it becomes a really functioning machine. I hope they manage to figure it all out.

The shaper origin is also kinda cool, but that one still spends human time and energy to get things done.
The maslow does seem a tad slow, but since you don’t need to spend human time on cutting itself it doesn’t really matter that much.

keep in mind that as we figure out the accuracy issues, we can then work on
cranking up the speed. A 2 HP router can cut a LOT faster and deeper than we
typically do.

If you limit the cut depth to bit diameter, and go to a 1/2" bit, you go from 5
passes to 2 (and given the need to cut tabs, you probably aren’t going to end up
going below 2 passes in any case)

Just backed the Goliath. It is live now.

If I had $ 1,500.00 extra I might get one for fun. The concept is interesting. I do see a couple of problems. Dust control being a very big #1 problem. The second is how this thing reacts to debris that it has to roll over from the lack of dust/debris control.

I don’t see how this thing could possibly track while cutting unless it is cutting very, VERY, shallow cuts. Doing a plunge cut on a router always takes a lot of muscle and control.

I guess time will tell.

PS, they are dreaming if they think that $2800 is a price anyone will pay for this once the kickstarter is over. $1400 seems like they are pushing it.

Yea, I have 45 days to retract my decision though so I’ll see how the campaign fleshes out.

My call out is this… we need an open source version of this!!!

I’m ready to strap my Rigid router and z-axis to some sort of robot sled that drive around.

Unfortunately we scrapped our little hockey bot. Not sure I want high school students driving a mobile router anyway… 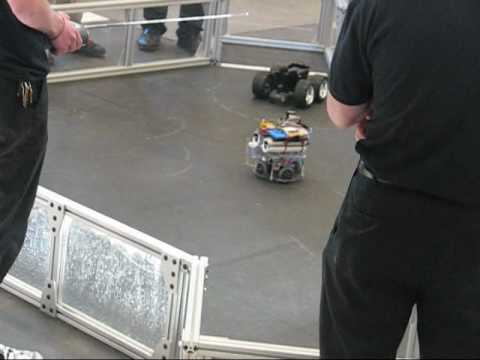 Goliath CNC is shipping the first 100 machines now. I am happy i did resist the urge to crowdfound them back in 2017.

I’m interested to see how they work out in the wild. I really wish I had backed for $1 so I could have read the updates

That’s great, for a while I thought they were going to be another failed kickstarter which is bad for the entire industry.

Nearly all of the HW i did co-crowdfunded either hadnt been completed or didnt work. Only two out of 6 products had been ever released with one beeing broke after 24h and the other one working but not as “open source” as promised. Then i am still waiting for my raspberry powered “Mugsy” (2 year delay).

If you read the comment section you can see that the machine is not fully functional yet. There is for example no way to remove the machine from the working area and exactly place it back. The firmware seems incomplete. So far it seems to be a toy but nothing one can use for any kind of prototyping or small scale production.