So, in the Houston area they call a comic con, Comicpalooza. I’m a member of a maker space called Creatorspace (www.creatorspace.org) and we were asked to make a sign for them.

I have a lot of problems with the cutting. I don’t think there’s anything wrong with the machine, it’s just operator error.

The first picture is an rendering of what I hoped it would look like. 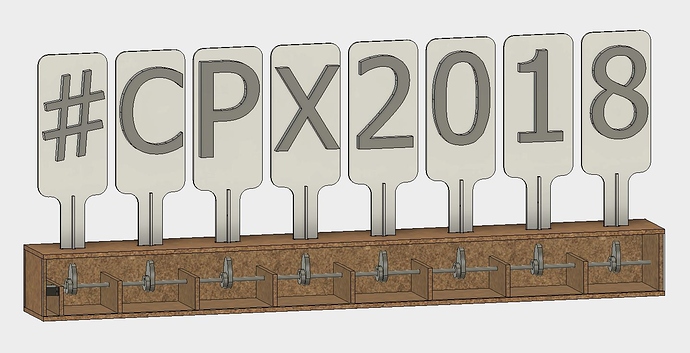 First attempt with acceleration in Fusion 360 accidentally turned off. 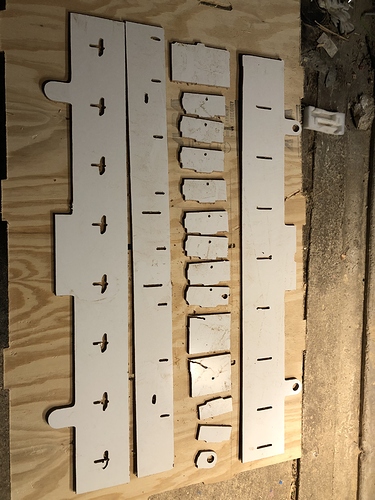 Second attempt with Z-axis not calibrated right, resulting in cuts not going all the way through. 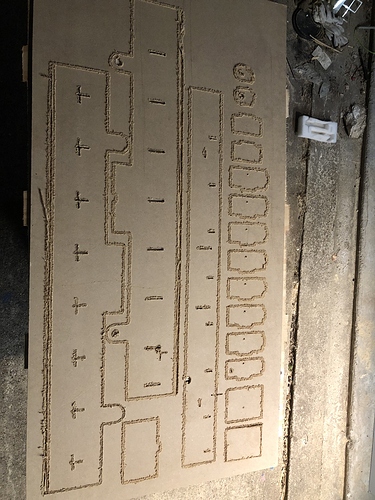 The final product, kind of. I need to 3D print some guides to keep the sliding panels vertical. I also still need to print the letters (#CPX2018) and glue them on with the LEDs. Then lastly I need to print and install the gears to connect the servo to the shaft. 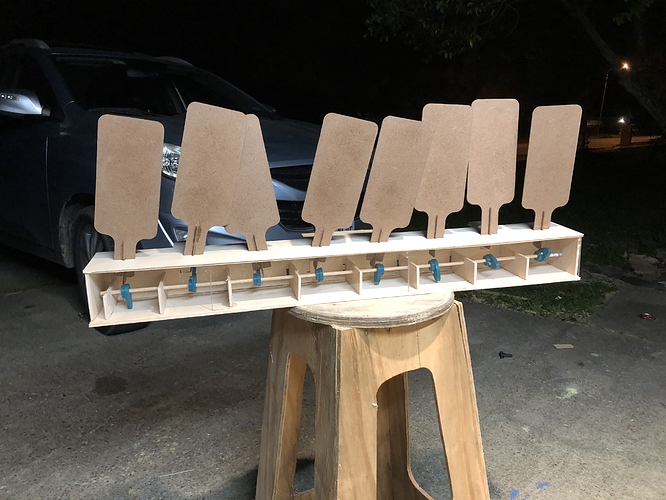 Looking good! I can’t wait to see the final design. When the servo goes will all of the paddles wave?

Did you do another cut with the z-axis adjusted?

They’re supposed to raise up and down, but I think some waving will happen if I like it or not.

The third time I cut it out I had the Z-axis adjusted right. I think I need to put an elastic cord around the top of the router to try an eliminate the backlash. I read it in another post.

I also like @MeticulousMaynard’s Z-axis modification. The one with the rails and lead screw. I just need to get the okay from my boss (wife) to buy it. Hiding the receipts of my recent purchases is making it difficult to buy new stuff.

some waving will happen if I like it or not

A second horizontal piece with the same slots should take care of any waving. Not sure if you could fit it under the existing one, but that might make for an easy solution.

That’s a good idea, one of our members made a similar suggestion this morning. I’ll have to see if I can cut one out tomorrow.

Any update on this? I want to see a video when it’s done!

I ‘finished’ the sign to the level shown in the picture. Then I brought it to the meeting to give it to the person in charge from our end. He informed me that the event organizers didn’t want an elaborate animated sign. Not at all, emphatically did not want what we(me) had made. So I talked about modifying the sign for our own purposes. So far no one had any desire for me to continue.

After looking at the cuts and how the finished assembly looked, I found several problems.

That’s about it. I do plan on finishing it to some extent, just not sure when.
Ryan.

Thanks for the update. I’m sorry it got rejected for its original purpose, but I’m sure you will find another one…and hopefully time to return to it. Thanks again for sharing it with us!