I made a wine rack right before the holidays that I forgot to post pictures of in the rush to get home. It was an interesting process because I was working from plans that someone had downloaded which wasn’t something I had done before. The plans were from http://www.makecnc.com/wavy-wine-rack.php . I volunteered to cut it out for a local theatre group.

I had quite a few issues with the files and I wouldn’t really recommend them. First the design relied on the wood thickness being exactly 1/4 inch (6.35mm) or 6mm, while the wood I actually had was 5.4mm thick. Scaling the entire drawing down so that the press fit joints would work for my wood resulted in a rack that was too small to hold wine bottles. Another issue was that there were right angle inside corners which didn’t have any added rounding to them to make them cuttable with a router bit. I think the plans must have been for a laser cutter. The plans did include both a .dxf and a .svg version which was nice. Ultimately I ended up re-drawing some of the parts in CAD to make it work and cleaning up some parts by hand after cutting them. Here’s how it came out: 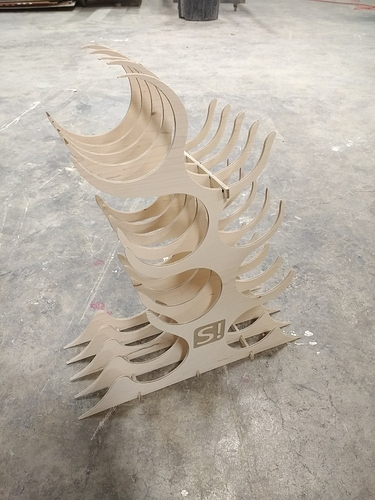 The part I re-drew in CAD was this spacer which holds all of the layers. I did it in OnShape so that it was easy to adjust the width of the slots for a press fit and added little whoopties to the corners to make them possible to cut.

Here’s the part I designed and a broken on I had left over: 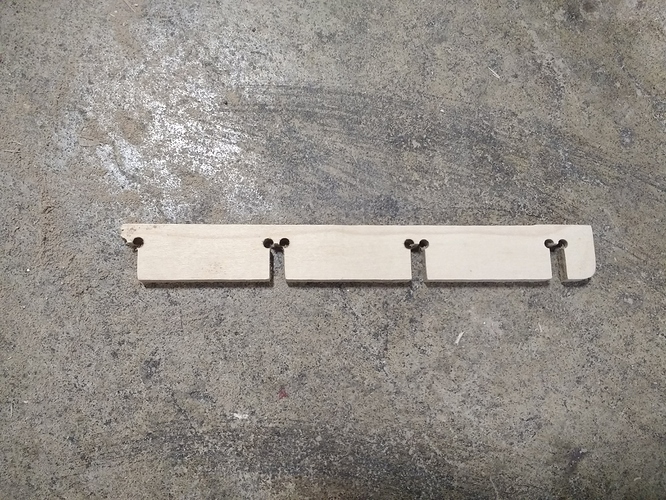 There were two issues with these. First they broke easily when installing them. Because the rack is tall, until all of the parts were in place it had a lot of leverage to break the joiners if anything got bumped (did this twice, much swearing).

Second (and this took me like an hour to figure out) having press fit joints in such a small piece of wood actually causes the part to bend. Every time I would install the spacers they would be bent, then I would take them back out and measure and they would be straight. What I didn’t realize is that the wood pressing into the notches was actually warping the whole part. Increasing the notch width by .15mm fixed the issue. Here’s my best attempt at showing the wood bending with some of the old broken spacers I had left over. 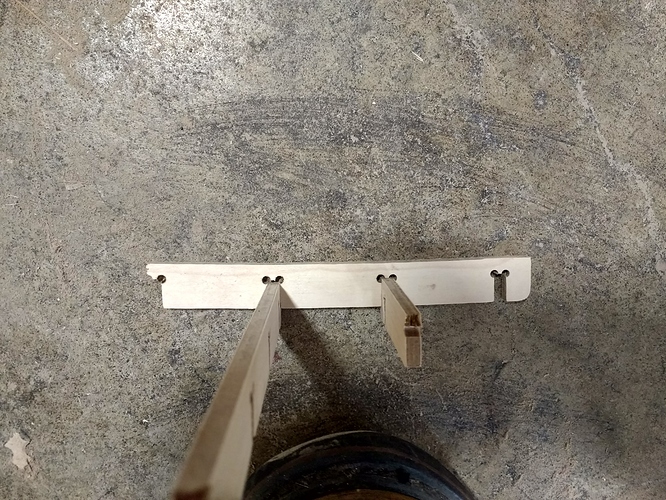 Overall I would say my experience with working with a downloaded file wasn’t that great. I felt like I could have drawn the part from scratch more quickly than I was able to work from the existing file but it was an interesting experience!

a note on the ‘ears’ you added to the slots.

a round bit cuts .707 * bit diameter (sqrt(2)/2) from the center, so you only
need to move the bit diagonally .293 * bit diameter to give you the room. it
looks like you moved the bit all the way up into the corner position

in round numbers, with a 1/4" bit you need to move it .075 in in each direction
to give you clearance.

That’s great advice! I’ve always just put them in the corners because it’s easy from a CAD perspective, but you are right that the other way would look better and be stronger and I’ve never known how that math works

The outcome of a quick check with my requirements is:
It can hold