Hi everyone! I’m new here and interested in CNC routers for small/“cottage” scale production. I’m interested in being able to do some sort of finger joints for my projects, which are essentially boxes/suitcases with lids, cut via CNC, assembled, and finished with handheld tools.

Does anyone have any experience making something like the joints generated by FingerMaker/TailMaker or similar? 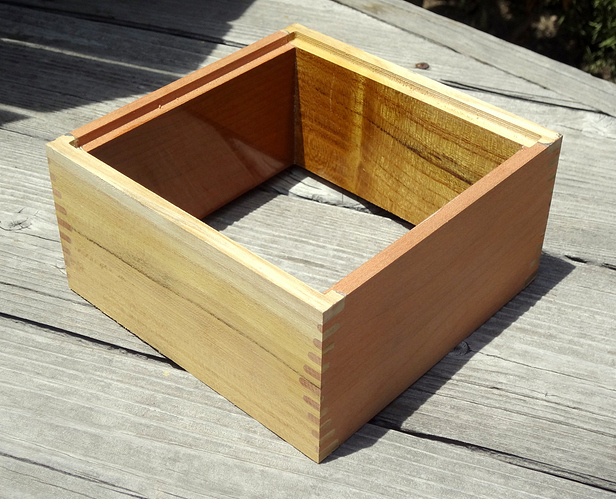 Essentially, my goal is basic finger box joints that are accurate enough to look professional when cut from birch plywood, but that don’t require any manual chiseling or other work on inside corners. I know this would depend heavily on the z-axis option.

I have been reading a bit about the Maslow but haven’t come across anything quite like what I have in mind which requires accuracy near that of traditional joinery, so just looking for advice from folks who are more familiar!

Welcome to our group. I have seen larger joints but nothing this small. I would say a few others here can chime in better on accuracy. We are constantly working on improving the Maslow.

I can see where you could cut the tails with the Maslow but I would think that you would have to do something pretty creative to do the pins.

the problem is that to do good finger joints you need to be able to cut on the edge of the wood. The stock maslow doesn’t let you do that (something could be rigged up by having the boards extend to the rear of the machine)

it’s not even the Z axis, it’s the fact that the bit can only cut rounded inside corners, and so you need to machine matching rounded shapes on the end of the other board to make it work.

Now, you could make a frame that has support in the middle for boards to stick out the back (a fairly minor modification to the new basic frame with all the optional braces), and then you could stack and clamp your boards to the frame and cut the ends with no problem.

that tailmaker thing uses a ballnose bit so it can make rounded fingers to go in the rounded slots and can all be machined on a flat surface… so in theory, appears like it could/should work?

that tailmaker thing uses a ballnose bit so it can make rounded fingers to go in the rounded slots and can all be machined on a flat surface… so in theory, appears like it could/should work?

yeah, just to be clear, the program I linked is designed with the sole purpose of cutting finger joints with a single bit out of flat stock on a flat surface without the issue of rounded inside corners. The joint in the photo and if you follow the link were cut on a flat surface, from flat stock, with no handwork required for the basic joint itself, so it definitely does rely on z-axis movement for complex shapes like in the photo, but perhaps not for basic rounded finger joints. I’m sort of surprised that this sort of joint isn’t more commonly known - same goes for my local makerspace, where my friend who is staff there had heard of such a joint but hadn’t actually seen it done on their ShopBot.

I’m thinking that a tablesaw/box joint sled might be a better bet, but I am hoping to minimize manual labor and I don’t already have a tablesaw, so I likely need to buy something either way…I am hoping that “something” allows for some amount of automation.

If you’ve got the software that will produce the g-code, I can’t see any reason
the maslow wouldn’t be able to cut it.

I fully expect it would be able to cut it in a literal sense, but I am curious whether it could cut it accurately enough to be appropriate for this type of joint. If you have 1/64"-1/32" slop, for example, this sort of joint with multiple fingers might not work well.

I think that you could come up with the accuracy if you picked the location that would work the best. The hardest would be registering your pieces so that there was no error.

there is repeatability and there is sccutracy

I think, you would want to give this a try:
http://woodgears.ca/box_joint/jig.html

I built one for myself and it works fast and very accurate.