Here we go. “Automatic fire extinquisher”. Just one fire extinquisher, but instead of a press-to-spray handle, it “works like a fire suppression system.” Dry powder, so OK for electronics etc. Should be perfect for garages/sheds/workshops, and only £28.

There are varieties with the business end on a hose with a mounting bracket, which would be best, but I can’t find a cheap one of those, though there’s no reason they should be more expensive. Probably worth hunting around more, on ebay or whatever, or just asking a local fire expert / pyromaniac

You can also buy the auto-sprinkler valve part quite cheaply, though you’d need a standard cylinder of CO2 with a turning on/off valve, rather than a COTS fire extinguisher to hook it up.

Those little “stove-top” aka “auto-off” things are cheap and might work fine too. But I find the standard fire extinquisher + standard sprinkler head approach much more convincing, since it’s essentially the same technology that corporations rely on.

The ball type, and the small canister type both work with a fuse, so I’d venture to say it would need to directly touch flame to “activate”. The automatic sprinkler type has a small plastic piece which melts at a specific temperature to activate.

If you’re thinking of mounting the ball or the puck to the sled (like I did), the puck type is very directional (in the direction of the wick.) I bet it would be effective 9 times out of 10, but if the router started a fire and then moved down before the flames hit the puck, I could imagine the charge missing enough of the fire that it might not actually do its job completely.

I can also imagine a scenario where the workpiece and/or sled catches on fire, and then moves so the sled is blocking the suppression system, and then moves to re-expose the fire to air.

I would expect that the vast majority of the time when a fire is started, it’s
because the router is not moving. It does take a while for enough heat to build
up

Dry powder is NOT ok for electronics. The dry powder used in fire extinguishers is very corrosive and can destroy electronics quickly (or worse, cause numerous small problems due to areas bridged or separated by corrosion).

This is the reason that Halon was previously used in dedicated computer rooms of yore. There are halon replacements, but none of them are cheap that I know of. And it is pretty hard to get your hands on a halon extinguisher these days due to the production of halon being banned in the US as it is a major ozone depletor.

the vast majority of the time when a fire is started, it’s
because the router is not moving

I posted this on a different thread and didn’t really get any response. GroundControl Crash on File Opening

Dry powder is NOT ok for electronics. The dry powder used in fire
extinguishers is very corrosive and can destroy electronics quickly (or worse,
cause numerous small problems due to areas bridged or separated by corrosion).

any computer or electrical stuff that gets the powder in it will need to be
replaced.

This is the reason that Halon was previously used in dedicated computer rooms
of yore. There are halon replacements, but none of them are cheap that I know
of.

And all of them require that you be working in an encosed space so that the gas
can displace enough oxygen to take care of the fire.

Not something for a garage hobbiest.

Agreed, but you aren’t going to be able to set one up to save your system
automatically.

but you aren’t going to be able to set one up to save your system
automatically.

at least not cheaply

I read the new motor shield’s AUX 5 & 6 ports allow control signals for things like a temperature based resistor (thermristor). Which makes me ask the next questions
#1 what thermistor would be good for this? There are a lot of inexpensive ones out there. or is there some kind of smoke sensor that would be better to connect to aux ports?

#2 how would one code the software so that upon a sudden temperature rise the router is automatically turned off via the AUX 1 terminal? or sound a 12v buzzer alarm.

Obviously you want to be in the room with maslow running, but it would be nice to have the machine turn off just in case you had to go to the bathroom or got distracted with phone call, etc.

Just a thought. My approach would be non-contact temperature sensing aimed at the bit. I would build a separate arduino nano system that triggers a relay to turn all power off. From my experience the scenarios that can cause fire hazard where due to the software freezing, buffer overflow and lost connection. So a system integrated in GC would not react any more.
A nano and perhaps https://www.sparkfun.com/products/9570 with a relay should not be to hard on the wallet.

I wouldn’t make the fire detection part of the Arduino setup - one possible cause of fire is when the Arduino is not operating correctly.

To know you can rely on a fire sensing system, you really need to test it out to be sure it works as intended. You shouldn’t need to actually start a fire, just get things warm enough to trigger your alarm.

I think I’m just going to buy one of those stove top fire canisters mentioned above and make a longer fuse for it that goes down really close to the router bit for now until I figure out something more high-tech.

If it’s low-tech and it works, that’s the best solution of all! 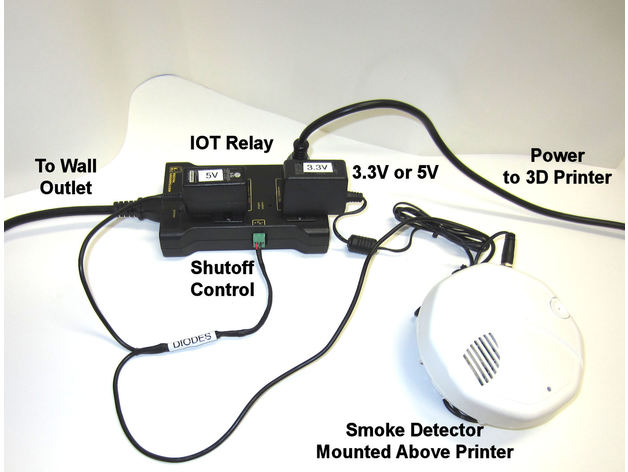 
this looks like a good warning system. which can be hooked up the aux 1 port to auto shut off router
aluminumwelder November 5, 2018, 1:39pm #67

unit on amazon has the relay on same board as flame sensor so easier to wire up.

initereseting to note that it detects infrared light so its plausible that it could be mounted close to the router bit and detect when it is getting hot enough to emit IR light and turn off router before a flame is even started.

I would assume that this would require a focusing lens to mount the sensor out of the dust collection zone (plus extensive testing). Has anyone played with these before?

.
P.S. As with all of these similar topics before - I don’t think anyone is suggesting that additional safety measures would imply less operator monitoring - Operating a CNC is dangerous - you should never leave it un-attended!

I ordered one to play with. The ones with the relay included I could only find from china. Amazon has an IR only sensor if you do not want the relay. a small tube or 3d printed widget could be put over the ir sensor to focus the energy. Dust might be an issue, but I think it can be overcome .The youtube video above shows it working with the flame quite far away.

A you planing to put arduino-nano or something on the sled (would only cut router power) or add wires and have it separate?

I think that the one thing I haven’t seen addressed here (may have missed it) but an IR sensor could be pretty useless with only a small amount of dust buildup blocking it.