I had been having thoughts about a small Arduino on the sled which would have an accelerometer to aid in accuracy and tilt detection. But with the small fire that started, I realized that fire detection would also be easy using a small contactless IR detector. This would be great to avoid fires… In the event of the bit becoming too hot, it could pause or shut down the machine before a fire started.

As a quick and dirty alternative, I also started thinking about how a brick could be replaced with a pressurized water bottle. Modify a cap, add bubbly water, a metal straw, and crimp the end around something that melts away in the event of a fire (like a healthy bit of hot glue?). 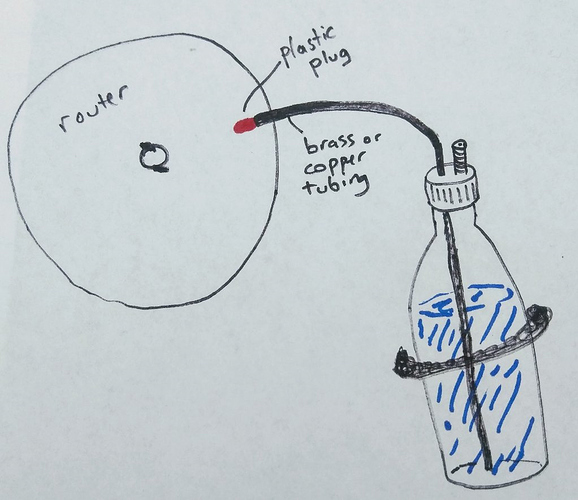 Why not just a smoke detector that sends stop command?

perhaps. Off the shelf smoke detectors might give you a lot of false alarms. I think small amounts of smoke are produced in normal operation. I don’t know that hacking a smoke detector will be easier, nor aesthetically pleasing. The IR sensors can be bought (much) cheaper than at adafruit. I like to link to pages that give a lot of “how to” info, instead of “cheapest parts”. Choosing the right IR sensor can give you much more ability to be in control of “what is acceptable”. Would it make sense to choose one with a narrow or wide field of view? What temperature is unacceptable? 160F? 190F? Fahrenheit 451? The threshold could even be more complicated, like a certain ramp in temperature increase.

Actually your IR sensor is a good point. Because under normal circumstances the bit shouldn’t get hot if using the right feeds and speeds. It would be awesome to have feedback on the bit temperature. If we get that setup, then we can stop bit way before a fire can be started.

Flash point for various materials or even different sheets of the same material would be different. Might find a lot of false alarms. Personal opinion is I am the best fire suppression system (as much as I don’t like the idea of baby sitting it for hours).

I am hoping that I can use those hours working in my workshop next to the Maslow on either the same or other projects. Maslow being a kind of force multiplier

I was hoping for a lazy boy recliner and a big TV… Agreed, more time in the garage yay! The gear sprockets getting jammed still has me spooked but I’ve done a few things to help minimize that.

Come to think of it, you wouldn’t even need a separate Arduino, just more wires running along the z-axis cable line.

So it looks like the Nest Smoke alarm supports IFTTT. If you are using a WiFi enabled power strip it is possible to have it turn everything off in an Emergency. 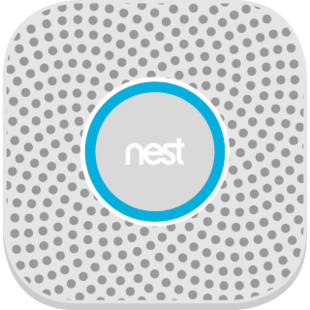 I describe a smart power strip in my Wiki here:

FYI - IR sensors usually can’t focus on small points they are looking wider then the point your looking for. IR sensors are famous for not working on 3D printer nozzles but they do work on the printer bed.

This suggests there is a 5 degree FOV IR sensor but I haven’t been able to find one for sale. Would work (I presume) with this kit from Sparkfun.

After a long career as an engineer and programmer, plus a shorter one as a paramedic, I’d never make technology, especially home built, all that stands between me and immolation. As a backup method, absolutely, but not the first line of defense.

If it works a thousand times, and fails once, you could still be a crispy critter. Possible your insurance company would cry negligence and tell your heirs they’re not covered, not that you’d care at that point. Check with your agent.

Get a set of headphones and put a la-z-boy in a corner of your shop, or at least a comfortable chair and wifi, if you don’t have have other projects to work on.

I’d definitely avoid devices that require an internet connection to work, like the Nest. One backhoe and you’re defenseless, and Murphy says it’ll happen when you need it most. The Telco calls that a bif, backhoe induced failure, btw.

never make technology, especially home built, all that stands between me and immolation

That being said, I do like a cool gadget, and I just got a notification about this in my email. Might fit the bill to monitor the whole cutting area.

The SparkFun Grid-EYE Infrared Array Breakout board is an 8x8 thermopile array, giving you a square of 64 pixels capable of independent temp detection.

@Keith I saw that array too… I hadn’t thought of mounting it to monitor the whole area. Good idea. Thought it was unsuitable (and overkill) for mounting right next to the bit.

More ideas I’ll never actually do:
So I was thinking about how one could use an aerosol fire extinguisher mounted to a servo, which could also hold a narrow field of view thermal IR sensor. This way the servo could sweep across the area, to get a temperature profile, but then if there actually was a need to extinguish a fire, the servo could be moved to one extreme of its range, and actuate the extinguisher.

I know this might be tough to engineer to fit across the top opening of the router, but here’s a rough sketch: 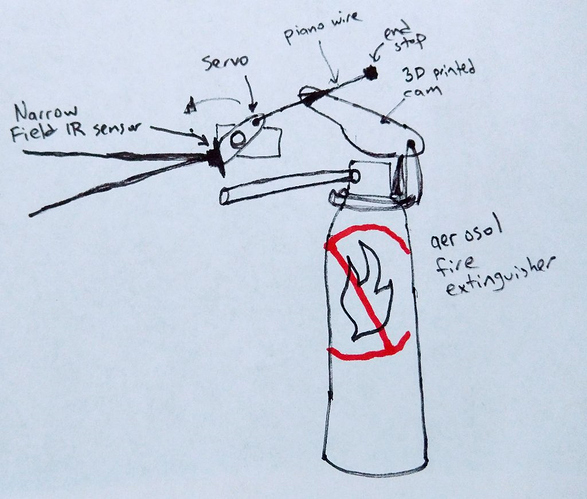 IMHO, THESE ARE ALL TERRIBLE IDEAS!

THEY ALL SEEM QUITE DANGEROUS!

I’m not advocating leaving it unattended

THESE ARE ALL TERRIBLE IDEAS!

I disagree with labeling these ideas “terrible”

These ideas are only dangerous if the machine is left alone. There is no substitute for an operator monitoring a cut, but if you are working in the same space as the maslow, but doing another task (as opposed to diligently watching the maslow) then having an automatic early intervention is certainly not a bad thing.

There are small automatic fire extinguishers. From older discussions on 3D printer fires on the informal Printrbot forum they were in the under $200US range on Amazon and elsewhere. Still spendy, but with assorted approvals and certifications that suggest greater reliability than homebrew.

Presonally I’d go for a combination of diy and colocated la-z-boy if I went automatic, certificated auto for those who wander off. Every woodshop should have an oversized conventional extinguisher next to every exit, never want the extinguisher on the other side of a fire, and some loud smoke detectors on the ceiling.

Thanks @mooselake and @Keith. I found this fire suppression ball for $40… It looks perfect to mount above the machine.

Edit: This ball is only 10 cm in diameter… you could easily put this on the sled!

I still think pointing an IR sensor at the bit, however, could add valuable information.

I’m almost up and running, it’s hard for me to really know until I do it. I just see a problem, and I like to think of solutions. It’s in my nature. 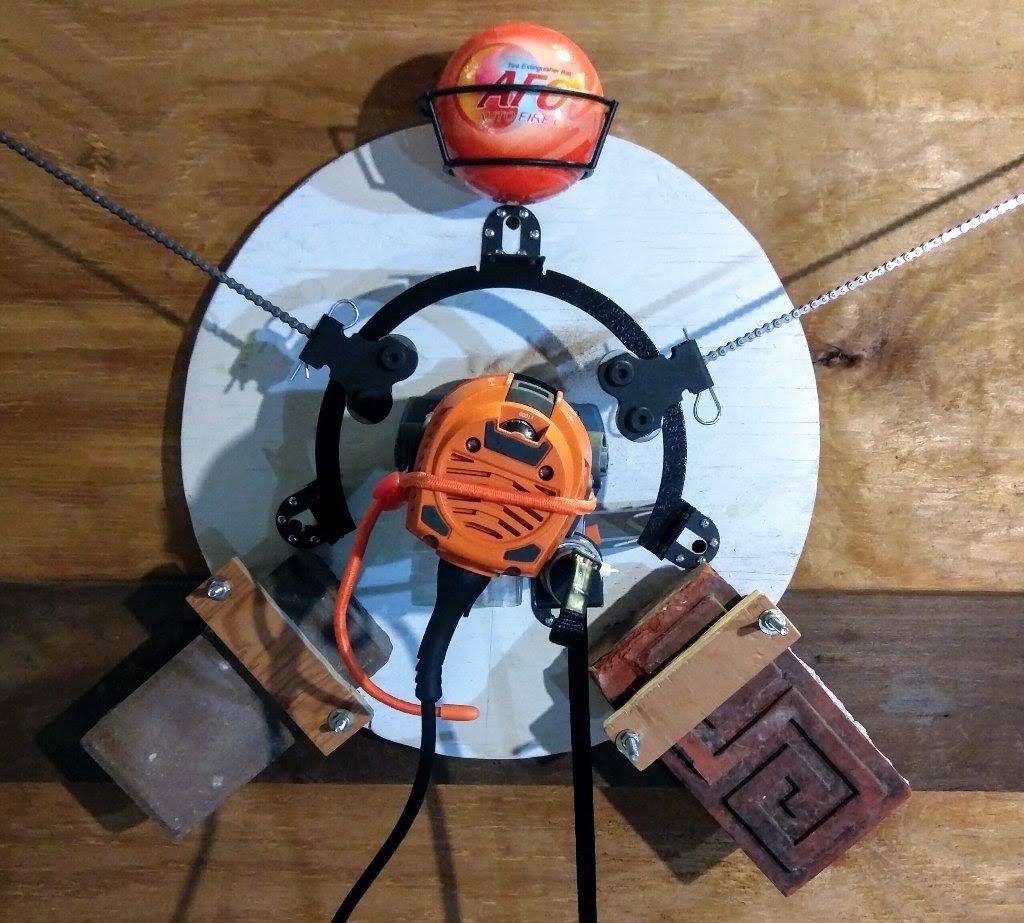