Happy to report I finally got to the 1st cuts on my Maslow. Solid 1st showing, but i still have some room for improvement… no exact measurements or calibration beyond the 1.10 calibration settings, using my 10’ Strut based frame, 4’x6’ work area.

i’ve got some issues with my chains/work area being about an inch out of parallel, and will cut the proper sled tomorrow, but so far so good!

big thanks to @dlang for his metal pantograph and of course @bar and @hannah, and all the MaslowCNC contributors!! 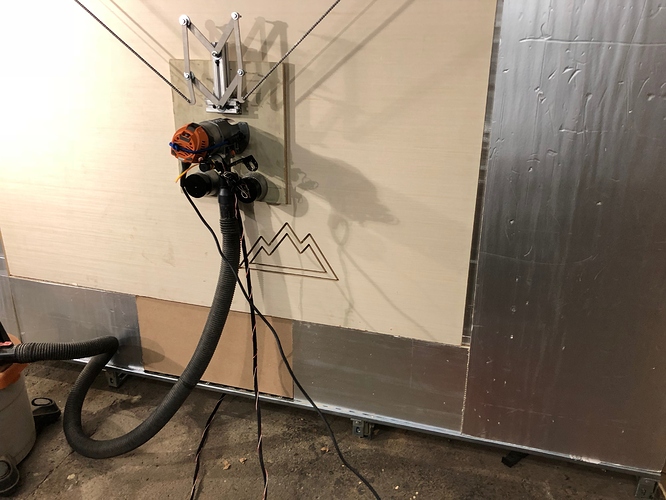 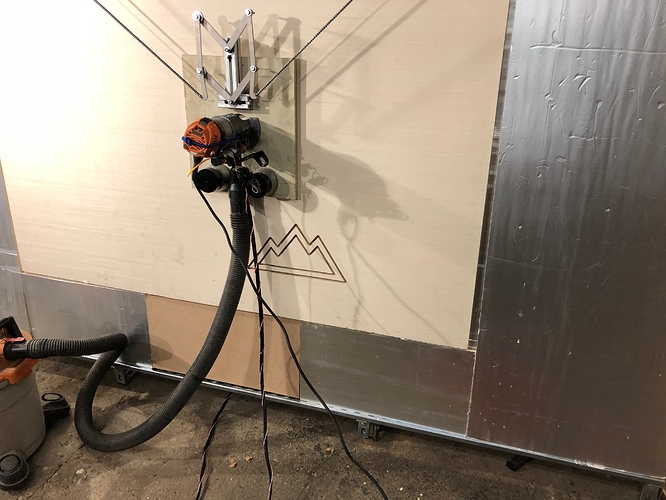 Looking good!!! I love seeing everyone cut the mountains as a test cut

The kit mount looks amazingly adjustable! Thanks for sharing!

Excellent Work! I love the clean look of it.

I’ve increased my working angle to 11deg (from 8.5) after experiencing some Z axis problems while cutting my new sled. Finishing the sled tomorrow and then cutting 2 spares for the incoming ring kit. I’ll use this thread to document more changes as they come, but I’m very close to dialed in, I might be a .5-2 links off, but I’m on the rounder side of oblong on the sled and distances are all close enough for building more than tweaking😀

could you go into somedetail about what your problems were? What were the
symptoms, did you try different angles between 8.5 and 11, etc?

This is an area we haven’t had people testing much, so all information is
very valuable

If you could manage to get a video of it misbehaving at a bad angle, that would
be fantastic.

I ended up making two 1/2 links and getting some cotter pins that fit everything well, it’s still awkward with the sled weight (a sled balancing mount will be in my 1st set of new builds sometime this week)

I purchased a T made of aluminum extrusion (4" x 7") to be able to precisely mount the vertical pantograph kit, adjust it easily and get more precision than 2 lag bolts in wood.

Mounting this on the ‘squared’ sled left very little force holding the sled to the work surface, but it was mostly there, and i was able to make my initial cuts, as documented above.

I then cut the sled with 3 different Fusion360 programmed maneuvers, 1 drilling operation, 1 pocketing operation to countersink 1.25" washers for the weights and vertical panto, and a contour for the central hole and sled profile.

It was during these drilling and pocket ops that I hit upon some Z-axis slop and the current 2-D + Z-axis movement restrictions.

problems encountered in my sled cut are documented in my thread about 3 axis movement. namely that drilling the z-axis alone relies only on the sled pressure on the workpiece, which was already low in my squared (v1) sled.

This is where i became more conscious of the true frame angle and after reading up on the forums realized my 8deg angle was def a little too low for others (@Gero for example) as well.

Also, while cutting the new sled, it was obvious that the router and X-Y movement were pretty spot on using 4mm cutting depth, it was steady and true and the router wasn’t complaining. I put a little more pressure on the sled by hand and it cut like a champ, and looked and sounded like it would have no problem with a little more speed and a little more depth. (see my observations in How fast does everyone cut? )

Unfortunately, enough slop persists in the router’s Z screw that I ended up not raising the bit high enough in a couple of traverses and some plunges weren’t ideal.

I’ll be upgrading to a ball screw for the Z-axis asap, and ditching the router base I imagine completely.

anyway, today i was able to change the frame angle to 11-11.5 (will micro adjust it tomorrow if needed) and after assembling and reattaching my new standard 18" round sled, the whole assembly was immediately more solid, plenty of pressure on the work surface now I think.

I haven’t weighed my sled yet but I have (5lbs of lead +2lbs of steel =) 7lbs x2 as weights, maybe another 2lbs for the extrusion and pantograph. My sled is 3/4" home depot cabinet birtch ply. its on the heavy side for what it is, I think, but not absurdly so.

I ran out of time this afternoon and had to hit up a birthday dinner, so I’ll have more tomorrow, and will be cutting 2 new sleds for the ring and to replace the current sled to remove the transversal gouges encountered on Friday, even though it’s probably not entirely necessary.

I’ll get some video and picts to show how I’m adjusting the Strut frame and how its cutting now.

If a continuous 3 axis motion is programmed there should be no need for a part contour to stop after ramping into the surface until hitting a tab operation, where a little over/undershoot would be easily fixable by changing the size of the tab to remove the effects while maintaining a strong enough tab.

more as I have it.

what did you end up with for the right height of the chains above the sled? (since you say a 2x4 was too high)

I’m not at my garage right now, but I currently have the 1.5" extrusion held off the sled by 4 washers, about 1/4", then the pantograph is up on a washer above the extrusion, so I’d say ~3" +/- from the work surface, maybe 60% of the height of the 2x4 on its side, all told. Again i think the problem I was having with the 2x4 method was my janky woodworking skills and imprecision of holes etc. rather than design. I’m getting better, and the extrusion allows me to easily seat and adjust the pantograph mount for the highest accuracy.

I’ll look into it more closely tomorrow, but that seemed about right and worked with the bolt lengths I already had (much more off the sled and I’d need another 1/4 of my sled to extrusion bolts.