Weird Cut... Does anyone know what the issue could be?

So this happened… I haven’t ever had this happen before. I was running a 1/8in bit (1x flute) @ 35ipm (although the velocity said 31) my step downs were .1 with a target depth of .2. As of now I think that my problem is the step down being too high but I’m not sure… If anyone could help shed some light on this issue that would amazing!

I will include photos below 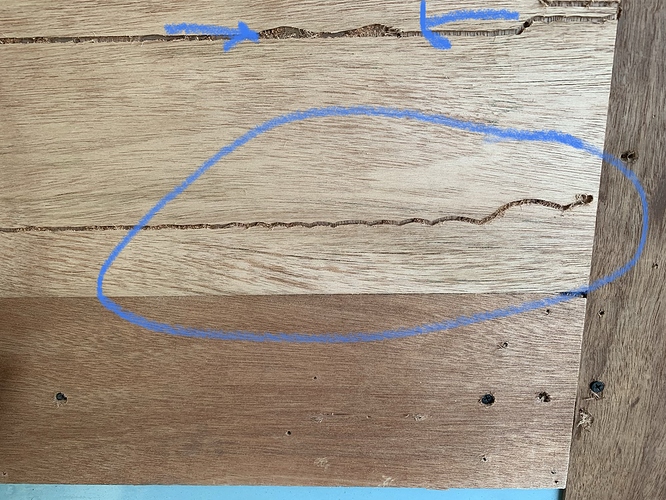 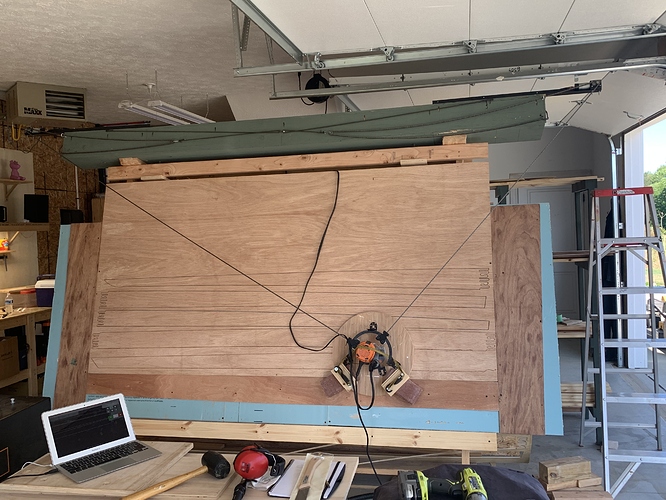 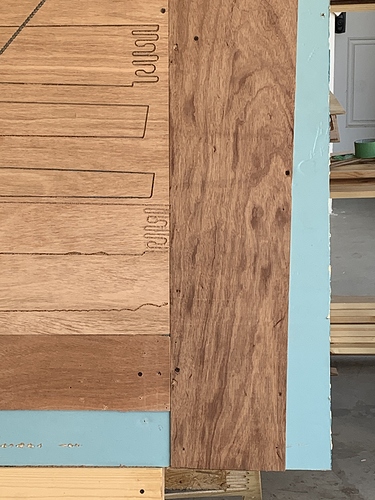 Edit: I remember the sled “jumping/bouncing” when making those strange cuts. That said, I doubt it is a software issue. Also, whenever the bearings moved along the ring… it caused the chain to vibrate more than I remember before, almost like a guitar string. Hopefully that data is helpful in troubleshooting this issue. 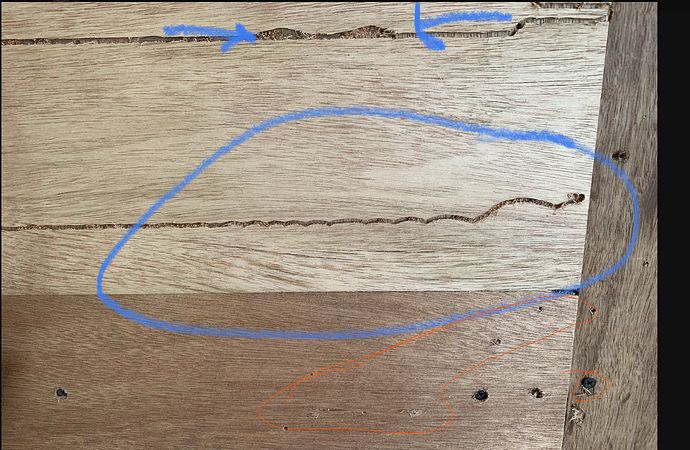 image2440×1592 1.59 MB
Is it possible your sled caught on one of the outlined red regions or the board interface that you have outlined in blue and walked a bit as it rotated to go past? If your ring or bit isn’t centered, it could have some play as it rotates. This is a stretch because it would likely be everywhere if that was that big of a problem, but to me it looks like a sled catch on something. I’ve had issues with board frames creating their own designs on my work pieces because the sled didn’t like the surface change or the surface imperfections.
The_Cat_In_The_Hat July 13, 2020, 10:44pm #3

I thought that that could have been an issue… but I ran it without the router on and it seemed fine during the surface change. The point about the bit and ring being centered is interesting though. I think that the weight distribution of the bricks could be slightly off because the sled for whatever reason likes to tilt slightly to the left. That said… how important do you think the weight distribution/placement of bricks on the sled is?

What about impending chain skip? The chain rides up on sprocket and then drops back into place.

I admire your eagle eye and second that a certain symmetry between the obstacles and the strange cut can not be denied. To avoid the sled catching on splinters of previous cuts, for the first pass I always have hand-sanding-block to go after the sled, at least on the first round.

how important do you think the weight distribution/placement of bricks on the sled is?

The sled’s weight is key in this system, it is there to reduce chain sag, sprocket backlash, and it’s what moves the sled down/sideways (chains can only pull).

The bricks are also there to prevent the sled from rotating on it’s own due to router torque, as lower on the sled they are the better it works, just leave enough space in between them for the vacuum hose.

I don’t think it is that because I wouldn’t heard the clash sound… I have had that happen before though.

one other thing. I once had my z axis cable catch on the frame and the sled “wouldn’t keep up.” While nothing was permanently damaged, it did shut itself down. Is the vacuum hose dragging or catching on something? Is the bottom of your sled smooth? I put a screw through once that poked through and scratched as it cut and that did weird things. I keep making the rookie mistakes. One of these days I’ll graduate.

the corners are tricky even with a 12’ beam. weght of the sled should be about 27 lbs for best results, what is your sled weight?

I had similar problems. Check the frame near the top corners of the frame and the plywood. What happened to me was that at those locations, the angle of the chain (and the low load on that chain) meant it was apt to hang up on various parts of the frame.

So run the sled out to that lower right corner again and look up in the upper left for places the chain is sliding, catching, or otherwise being contacted by frame parts.

Then swap - run the sled to lower left and check for interference on the upper right corner with the frame and such.

that looks similar to what happens when the sled sticks and doesn’t slide.

watch as it’s cutting and see if it sticks and then suddenly moves quite a bit.

also check that the chain is extending smoothly, I have one link on my chain
that didn’t want to move right and would sometimes not straighten out after
passing the sprocket.

making the sled bottom smoother, waxing it, and anything else you can do to make
it slick is the first thing to do.

Bottom corners are tricky on the best days. With bungees instead of counterweights, they’re worse. It looks like your chain slack might be rubbing on your top beam a bit because it’s not in enough tension. Not sure if that would contribute to the issue, but it certainly wouldn’t help.

I have seen something similar to this when cutting near the edges of the frame. In my case it was caused by the sled tipping/ not laying flat through the entire cut. I fixed the problem by raising the ring, this shifts the balance point of the sled and helps keep pressure on the front of the sled. hope that helps

I had the same thing happen to me twice yesterday. Both times were different passes and places on the same cut line. I was caught off guard the first time but did see the precursors.

As the sled moved from left to right the left hand part of the pantograph hung up. Even though it was still feeding the right side pulled the sled vertically causing the failure.

I’ve noticed two things with regard to my sled (original? Metal Maslow without additional weight). First the arms of the pantograph tend to bind. Nothing consistent but the side under less tension will have a tendency to cause the sled to “roll”. When it sticks it wanders slightly, maybe 3-5mm. The second item is that the sled seems to have a significant variability in the pressure the sled applies as it moves around. Using a plunge bit I can see the sled lift slightly when plunging after a tab or change in layer.

I am using the bolt together frame with a 12’ top beam. When the suggested spacers are used between the uprights and crossbar the weight distribution of the sled becomes uneven. A lot of force at the top but minimal at the bottom of the sled. Upon removing these spacers my chains are now parallel to the bed of the frame and the weight distribution of the sled seems more even. Unfortunately it also appears to be inadequate. Two very heavy, solid metal bars were included in the kit. My next goal is to figure out how and where to mount them to, hopefully, increase the pressure between the sled and work piece.

the weights should be mounted on the sled below the router, once you add them
you need to check the balance on the sled (does it hang straight when you hold
it by the chains in the air.)

you want to make it hand straight, then adjust the spacing on the top beam to
make the chains parallel to the bed.

adding the weights will change the balance point on the sled.

I had to remove all the spacers that the plan calls for to get the chains parallel to the surface. I need to check the angle of the bed. I believe that I have to tip it towards the back a little.

There are no holes in the weights or sled available. The posts for the pantograph make it even more difficult to find a mounting point.

I’m also wondering how much the complete sled weighs. I saw 20lbs as ideal somewhere.

Your chain adjustments making you remove all the beam spacers makes me think you may have missed a step.

Hope that helps. If you already did that, then you should be good to go.

Thanks for that info. There was nothing about balancing the sled in the frame setup or from Metal Maslow.

The reason for removing the spacers is the chains were actually contacting the top edge of the work surface when the sled was at the lower extremes. Once removed the chains are roughly parallel to the work surface. Maybe off by 1/4” depending on where he sled is.

The sled itself is pretty balanced. It hangs relatively straight but the downforce on the bottom seems to be somewhat light. This is what I believe lead to the bad cuts in conjunction with the binding in the pantographs.

I’m also wondering if my work surface is tilted a little too much toward vertical. There is a noticeable difference in the pressure exerted by the sled when at the top vs at the bottom. In my mind the downforce of the sled should be greater at the top than the bottom but it seems that in my setup the force at the bottom is slightly less than desirable.

Sometime during the 80’s the network that covered football tried a camera suspended above the field. It mainly consisted of two cables that ran along the long side of the stadium. The camera was mounted on a sled that created an “X” with the cables. Here were two capstans that were used to drive the sled to different positions. There were two drums used to handle the slack during setup and operation. This allowed for vertical movement such as during setup and registration of the camera.

I bring this example up because I believe it could be a logical evolution of the Maslow CNC. It would move the motors onto the sled but I believe it may be a significant improvement in performance. Increasing the angle of the bed towards horizontal would improve contact with the work surface perhaps necessitating more powerful motors but would eliminate most of the issues I’m seeing. That being the sled lifting slightly when plunging into the material before lateral movement and binding of the ring/pantograph.

I am reading more about the suggested weight of the sled as 27 lb. Is this correct? If so I may need to put my sled on a weight gain program.