Go to function in GC

Would someone please elaborate on how to use the “Go to” function in GC? I’m having a difficult time finding resources on this command. My home position seems to be intact? My laptop crashed

‘Go To’ wants you to type a line number referring to a line in your gcode file, then it sets the ‘program counter’ to execute that line when you click ‘Go’.

There used to be a feature that lets you click inside your workarea and tell the spindel to move there.

Go To’ wants you to type a line number referring to a line in your gcode file, then it sets the ‘program counter’

I will try this in the evening.

Be careful using the goto function, it may not set the spindle height and will crash the bit into the work piece.

Does anyone have a good way to determine the line numbers of the g-code transferred to GC? I have been using Inventor to make models and HSM CAM to produce g-code, and the g-code editor shows the code with line numbers, but when I attempted to go to a specific line using GoTo, it seemed to go to a line about 100 lines earlier. Does GC discount comment lines or something similar?

A quick test telling to goto line 9 was exact with GC, pluma txt-editor and bcnc (if you don’t count the ‘topics’ with the triangles. 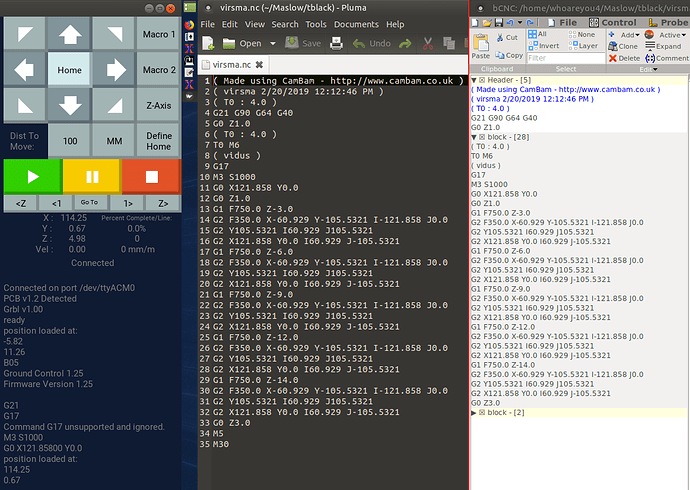 Edit: You have discovered something serious (in fake server mode!)
Will take Bahrain forensics some time.

Edit2:
I went further in line numbers and seen +1 then the goto, but more serious a Z-move that is nowhere in the g-code. Need time to confirm this observation, to be sure before this has to be an issue on Git.
For now it’s just me at high toxin-levels.

Pluma looks like it might be useful since it provides line numbers. My issue was that I was trying to get to line 1254, but ended up having to goto line 1360 to get to where I wanted to be… and not that I think about it, I was thinking backward with regard to GC skipping lines, and instead it seems that it added lines. 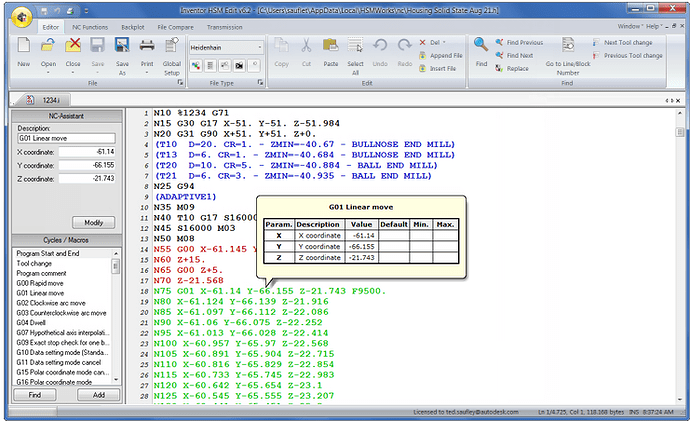 I really like the color coding for various operations, a well at the ability to get descriptions of what the line is doing.

I think, overall, I am pretty wary of using the GOTO function. I can see where it is useful, but in a long, complex g-code program, it might cause more problems that it solves for me.

I think I’ve figured out both these concerns, Just had to play around a bit. So I’m typically using Fusion 360 to generate my gcode. When a tool change takes place, the machine stops for that tool change. To use the goto function I just went to the Z move of another operation and hard coded in the M3 (CW spindle on) into the nc file.

The reason why all of this is important is b/c for some reason during my last cut the router lost its original home position. I am now trying to figure out how to work my way backwards without having to scrap out this partially cut material. For some reason I did not map out where the origin of work piece was before cutting. So I’m thinking I may have to re-orient the home position by moving the router to where it thinks a certain feature is and then measure the feature center to router center distance to try and get the proper hor/vert position adjustment.I was planning on scoring the work piece lightly with the tool to get the off position to measure the center to center distance. I’m hoping a drill hole for measuring will work.

Was just curious if anyone has had this issue before.

So just a follow up here to my last post. I believe for what I’m doing, I may have achieved good enough status with re-centering the home position with partially cut material. First I threw a dart to see how far I was from feature center horizontally then dialed it in vertically. In all actuality it didn’t take too much time, just a pain in the butt. See image below. Hope this helps for someone else who gets in trouble. 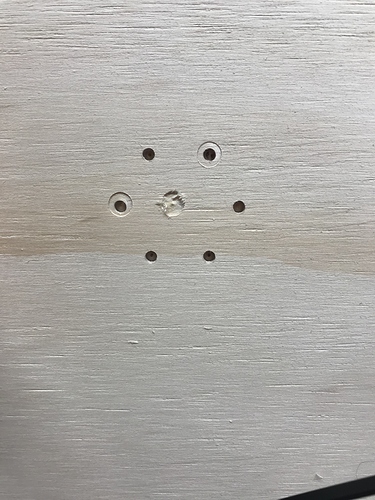