A few weeks ago I had the right hand motor fail in a strange way. It was gear number 3 (?) That failed. About a month previous I had changed out the gear that usually fails with the upgrade from the maslow surplus store, and sure enough the upgraded gear was too good. It stripped out the adjacent gear in a bad way. I’m waiting on replacement motors from @bar but it always takes a while for things to get across the border to the north. Figured you all would like to know about this. Not sure if anyone else has had this failure. 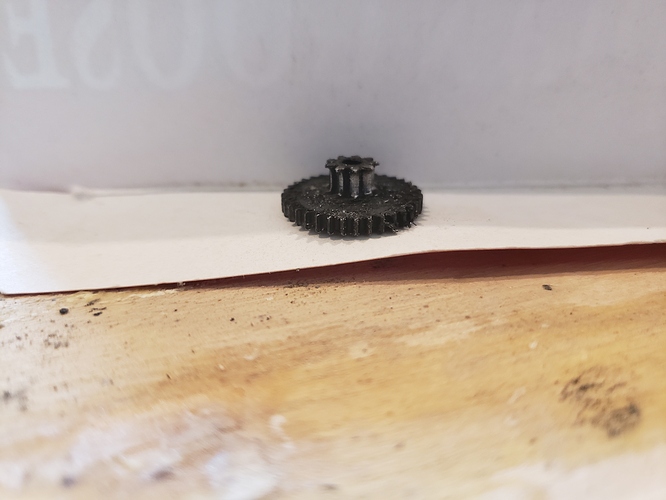 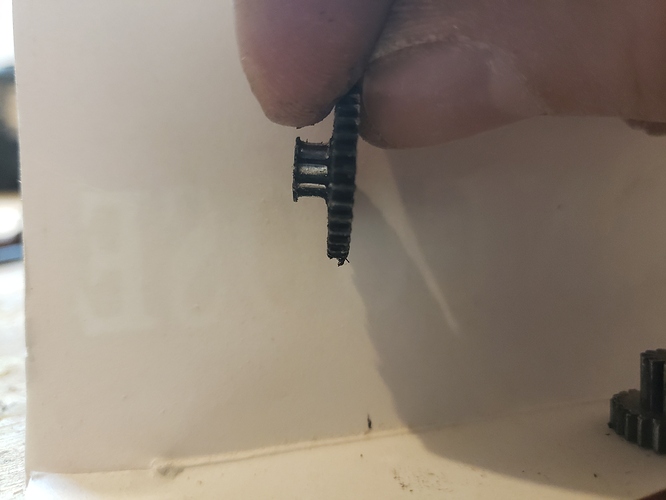 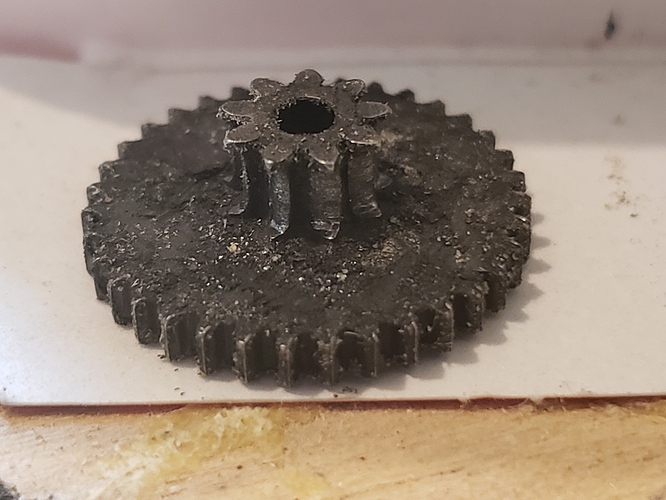 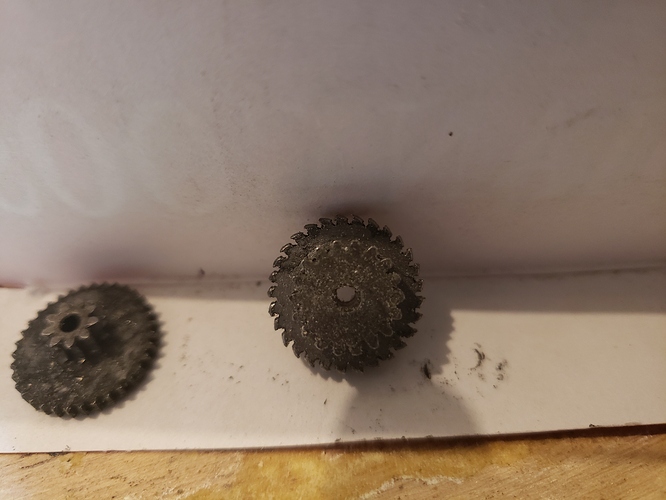 Why the stripped gears? I’ve been wondering if excessively weighted sled would lend to this since stripped gears seem to be isolated rather than a common issue. Basically, I feel my sled is a little heavy and wonder if I should lighten the load.

You may be right on too heavy of a sled. I’ll put mine on the scale next time I get a chance. I’m now also wondering if I don’t have enough weight on the slack side of the chain. I only have about 3 pounds on either side.

I do find it strange that it was the motor on the right that failed and not the left. I would have assumed the left would have failed before the right since it’s the one that’s doing the pulling during calibration for motor distance.

doesn’t the weight of your sled just have to be balanced by the counterweights? Even if your sled weighs 100kg, if the counterweight is also 100 kg the gears won’t have any weight to move (other things might wear out, just not the gears). And at the speeds we’re moving momentum seems negligable.

edit, just realised that stretchy cords are shipped with the standard kits (i assume). Seems like another reason to switch to counterweights. I have both slack parts of the chain connected and a bucket of stones connected behind a pulley system.

There are no counterwights and the stretchy cord is just to control the slack,
it makes no significant difference to the weight on the motors.

keep in mind that if you have too much counterforce (weight or strechy cord)
pulling on the slack side, you unload the gears and now have to worry about
backlash as a source of error.

It just doesn’t work to try to counter the weight of the sled with
counterweights to reduce the force on the gears.

It just doesn’t work to try to counter the weight of the sled with
counterweights to reduce the force on the gears.

I think that you are correct in general, however, stripping of the gears indicates that the motor is supplying more torque than the gears can manage against the weight being lifted by the chains. To that end, while complete counter-weighting is likely infeasible, it might behoove those with acknowledged heavier sleds to ensure that there is more force applied on the slack side of the chain.

Your point about introducing backlash is astute, and is important to keep in mind. I don’t have the time or inclination to find the sweet spot of how much weight should be applied as compared to the sled, but I think that each person can decide if their sled is on the heavy side whether they would benefit from additional weight.
It would also be interesting for those who have had stripped gears occur (outside of chain wrap) to report on the weight of their sleds to see if there even is a correlation.

with the stock 10’ top beam and a ‘normal’ weight sled, the tension on the long
chain when cutting in the bottom corners can get down under 4 pounds, so any
more tension than that on the slack when fully extended will introduce backlash
error.

another thing to experiment with is the frame angle, in theory, a frame closer
to vertical needs less weight to keep the router in the right place, but at some
point you get to the point where you no longer have enough force to drive the
bit down into the wood.

now that we have chain sag compensation in place (or will as soon as a new
release is cut), a lighter sled with more sag should be just as good as a heavy
sled for position accuracy (with a caviot about possible insufficient forces in
the corner to move fast)

Good to know. Perhaps that should be a driving calculation for the mass of counter weights… ie a calculation of the maximum force exerted by the sled on the long chain when at the opposite corner? This would be driven by the weight of the sled, the workspace dimensions and the distance between motors.

If it does turn out that heavier sleds are experiencing gear failure more often, this could prove essential in preventing that failure going forward.

Good to know. Perhaps that should be a driving calculation for the mass of counter weights… ie a calculation of the maximum force exerted by the sled on the long chain when at the opposite corner? This would be driven by the weight of the sled, the workspace dimensions and the distance between motors.

you can play around with the spreadsheet at

If it does turn out that heavier sleds are experiencing gear failure more often, this could prove essential in preventing that failure going forward.

We know that when the sled gets too heavy, cuts aross the top suffer as the
motors cannot pull hard enough and we get the ‘hook’ instead of straight lines.

We know that when the sled gets too heavy, cuts aross the top suffer as the
motors cannot pull hard enough and we get the ‘hook’ instead of straight lines.

I thought, from posts by @gero that this is mitigated with a power supply capable of 10 amps. I have not been cutting up that high yet, but I went ahead and got a new 16 amp power supply, while also to aid the motors (I also got my hand on one of the blue smoke shields), but also to run LED lighting. Hopefully I’ll have time to set all that up in the next month.

you can play around with the spreadsheet at

In his case he had a power supply that could not provide full power, but we’ve
had many other examples of the problem. Also keep in mind that the stock board
can only handle 2A per motor, so if the Z isn’t moving, it will only support a
little over 4A total, if the motors draw more than that, even if the power
supply can supply it, the chips will fail.

Ah, I hadn’t realized @gero had a defective power supply, I thought that it was just that the stock 5 amp supply wasn’t keeping up with the load.

Yeah, that’s why I am planning to implement the smoke herder board.

This is something I’ve been thinking about for a long time. I see a need for taking up for the inaccuracies in the bottom corners. I figure any ideas may be helpful. This is the best idea I’ve come up with so far. It’s better than my bungie theory when it is close enough to the corners to be a problem. 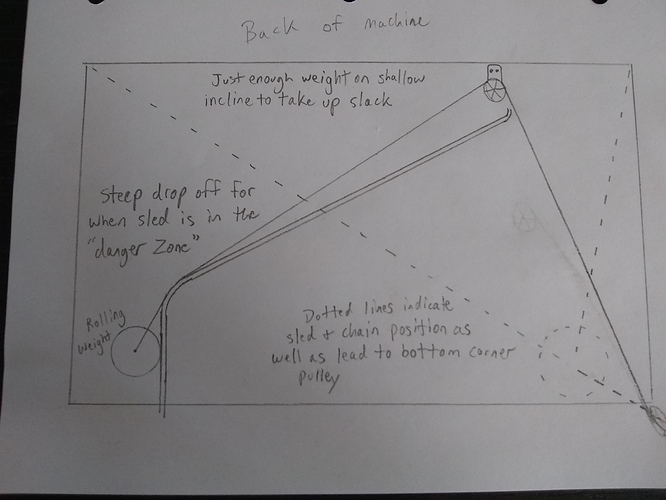 interesting idea. I like the dual weighted idea. If you wanted to take it further, you could probably design a curve such that the weight applied were constantly variable over the range of movement, which might be able to provide a constant force between all four attachment points (ie left chain tension + right chain tension + down left + down right = constant.
Further thinking about it, I think that you are right to have the majority be a minimal slack take-up force with a “danger zone” increased force for the problem areas in the corners. Simpler to implement and removes unnecessary additional force in areas where it is not needed.

The problem with any passive weights to the bottom corners is that the more
horizontal one to the far corner will apply more force than the more vertical
one to the near corner (and if you use springs/elastic it’s worth, as the more
stretched one pulls harder as well), so I don’t see how it can work.

you need something that pulls harder to the closer corner than to the far
corner.

Also remember that whatever force is applied by a mechanical change will need to
be accounted for in the software.

extending the top beam to 12’ has a huge effect on the forces available in the
bottom corners. (more than doubling the force, which has even more of an effect
when you consider that friction is constant). Try that before you try a more
complicated mechanical system.

you need something that pulls harder to the closer corner than to the far
corner.

@TheMerryYeoman’s idea does take this into account. When the roller weight attachment is at it’s longest, either due to the sled being high on the work space, or due to the sled being in the opposite corner, the low angle for the roller weight will exert less force on the sled across the more horizontal attachment, meanwhile the closer attachment’s weigh will have dropped off the “danger zone” slope to provide increased force in that problem area alone.

Also remember that whatever force is applied by a mechanical change will need to
be accounted for in the software.

This would be another point in favor of a two slope solution rather than a continuously variable one as it might simplify the accounting. In a certain “danger zone” a specific and known force would be applied to the sled in a position dependent vector.

I think that as a mechanical solution it is elegant, but is also complex to implement. I would love to see it working, though.

I know my plan is to go for a 12ft top beam. Picked it up moments ago actually. Chains arrived the other day. I’m hoping 14 ft is enough. Plan is to stack the new beam right on top of the original one.

Chains arrived the other day. I’m hoping 14 ft is enough

I trust that you mean 14 feet for each side. If so, you should be good

Yup 14 ft per chain. Since the machine is down I think it’s a good time for mods and paint.