The Maslow CNC sled is moderately unstable from a structural standpoint. This instability is most obvious in the lower corners, where the lateral tension is lowest, where chain sag most influences positional accuracy, and where the weight of the chain pulls the position out of the correct position.The sled is also torsionally unstable about the axis of the router, and parallel to the axis of the router. These problems are demonstrated by cuts that should be but are not straight, and the cutter pulling out of the router path. Several concepts have reduced some of the instability issues in critical locations, such as tensioning systems, slower cuts, shallower cuts, and improved calibration.

There is a way to get significantly improve accuracy and precision in a very simple and inexpensive way based on the concept of Single Minute Exchange of Dies (SMED). When preparing a 4’x8’ board for machining, two notches are first cut in the board at the top edge 4’ apart as shown in the first image at the top left labelled “1.”. 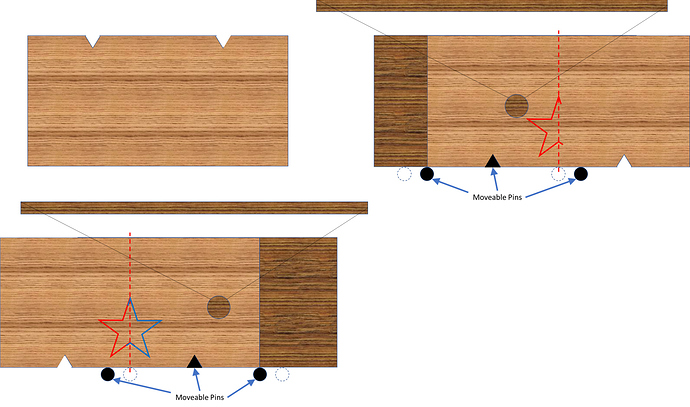 The size of the notches are exaggerated for visibility.

This simple setup technique can assure that the board is accurately and precisely positioned relative to the Maslow CNC every time it is setup. Next we machine those portion of parts that are only within 25" of the centerline of the Maslow CNC such as left half of a star shown in red in Figure 2.

Because all of the machining is done in the center of the Maslow CNC, accuracy and precision of all cuts are very close the the best accuracy possible on the equipment, and the accuracy of the board setup from one setup change to the next can be within the accuracy of the notch cuts.

Naturally, when boards are narrower than 4’ wide, only one notch needs to be used in the board. Adding more notches makes it possible to cut parts from boards longer than 8’.

that is pretty clever. seems like a lot of projects aren’t any bigger than 4x4’ anyways, and in that case one can just move the plywood to the center.

Great approach. You clearly know more about the Maslow CNC than I do. Thanks!