I’m waiting patiently for my parts kit to be shipped. In the mean time I decided to go ahead and build the frame. It’s all Superstrut and is being welded in most places rather than, or in addition to, being bolted together. Right now it’s just tack welded and using some temporary bolts at the top. I went ahead and put the whole thing on casters too.

Anyway, the idea is that the backing will be 3/4 plywood and will extend several inches above and below the 4x8 workspace and a foot to each side. The spoil board, foam insulation, will also. I’ll need to come up with a final material for on top of the spoil board that’s the same thickness as whatever I’m cutting. That way I can cut all the way to the edges without the sled getting tippy.

Here’s the first pic of the strut frame before any backer or spoil boards are added. 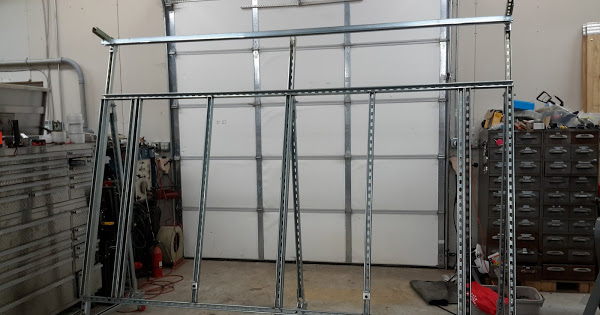 What are you planning on using as the computer and OS to run your Maslow?

Thanks. I’m planning on running Debian Linux on an Olimex Lime2 board.

I happen to have one I bought for a different project that fell through. More robust than a Raspberry Pi and a good bit pricier but since I have it, it should work great.

We have another thread going right now on some issues in Debian. Do you know if that has OpenGL 2.0 compatibility?

Hopefully that’s true. Thanks for the heads up. I could run it off a Windows laptop if I had to but I’d hate to subject this machine to that environment.