I should be receiving my Maslow kit in the next day or so, but have gotten a head start on designing a frame. I’d love some input on it.
I’ve amended the frame design to have mitred angle braces that fit inside the frame, have the leg supports all on the same plane and held together with corner blocks glued and stapled into place, as well as adding some more 2x4 framing to stiffen up the whole thing. I’ll also be using a piece of 1.5" angle steel for my motor support. I think these changes are in line with what other users have been doing.
The thing that I would most like to hear from the community on is the material support. I’d like to avoid having any protrusions supporting the sheet that would interfere with the sled at the bottom of the sheet. I’m planning to have a full width ledge that is the same thickness as the working material. To do this, there is a trough well below the working area that will hold one of three inserts that will then be screwed down. The inserts are a wide strips of 1/8", 1/4" and 3/4" backed by a strip of 1/2" ply to match the spoil board. The effect is that there is a seamless connection that the sled can ride on and not get hung up on and is tall enough to allow the sled to run all the way to the bottom of the sheet.

How does this look to you all? 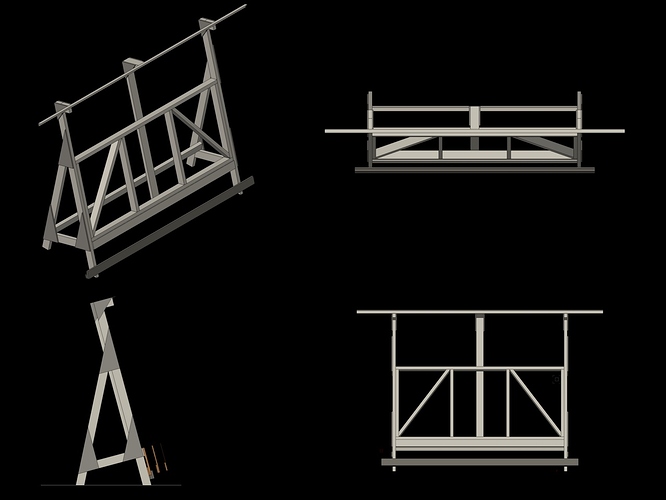 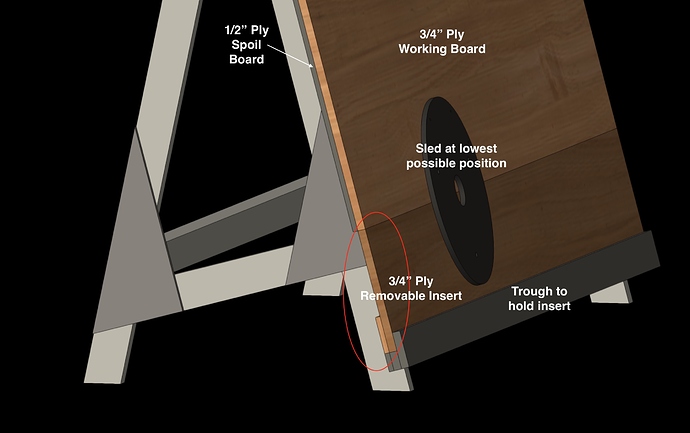 looks good to me. I don’t think you need to make the trough (just remove the outer most board). All you will need the ledge to put your insert on so you can screw it down. Saved you a boarded

The trough is an interesting idea. I wonder if it were be left in the thickest configuration would the thinner removable inserts stay in place through gravity?

@rocky_creeker Welcome to our group.

This “Furring out” of the waste board is similar to the 80/60 frame system of corresponding counter width wast boards as describer here:

Does the default frame allow you to cut all the way to edges of plywood? Frame

To me it seems you would need an apron around the edge, but didn’t see any talk of that in the new design. Is there enough stability as-is to allow you to cut past edge of plywood without having the sled tilt? Thanks.

I was thinking along a very similar line. I am glad you posted this, because it is simpler than what I was imagining.

There would probably be too much slop to rely on it staying in the right place. I’d screw the insert down to keep it in place as well as keep any warp or twist tight against the frame. I use a lot of 1/8" luaun and that stuff is pretty floppy sometimes.

I build sets for a theatre and we salvage nearly everything we build, so I’ve got more scrap lumber and plywood than I know what to do with, so I’ll probably just keep attaching random boards till i run out of scrap! This whole frame is getting built out of reused materials, all of which have had on-stage experience!

That’s exactly the intention of the trough. An easy way to drop the insert in and have it square and supported while it gets screwed down.

I looked at the 80/60, which is what sent me in this direction. I didn’t think the top and side skirts were all that necessary, though. We’ll see if I’m wrong. If so, I’ll adapt a similar insert for the sides. The 80/60 has your sheet fit in the hole made by the skirt and requires changing the spoil board behind your working material. I like just changing the bottom strip and leaving the spoil board in place. Two similar techniques to the same end.

unless the ledge is adjustable you will have trouble, wood is just not that
standardized and even small differences can cause problems as your sled crosses
beween the workpiece and the ledge.

but if you do make the ledge adjustable (and have it be several inches tall to
support the sled as you get to the bottom of the workpiece), it should work
well.

I would plan on cutting the part of the ledge that sticks out with the router to
be sure that it’s ‘flat’ in relation to the motor positions.

remember that you will eat up your spoil board, so make it replaceable as well.

also, while the triangular gussets look good, they are a real pain to make, overlapped 2x4s may not be pretty, but they are simple and strong

Not sure what you mean by wood not being standardized. I’ve used hundreds of sheets of plywood over the years and everything except CDX has been square and within a sixteenth of stated size. Never had an issue with plywood. (Stick lumber, on the other hand…)
What direction of adjustability are you referring to? I’m planning on using a rounding bit on the edge of each insert as well as the sled to avoid catching. Is that not enough?
The inserts are 11 3/4" high, leading plenty of space for the bottom half of the shed.
Spoil board will be just as it’s name states.
Mitred cuts are no problem when you have a big chop saw. I used this method to brace the Theatrical flats and platforms that I have to build frequently.

Want to get dizzy without drugs?

Read my Wiki bit on standards -

Not sure what you mean by wood not being standardized. I’ve used hundreds of
sheets of plywood over the years and everything except CDX has been square and
within a sixteenth of stated size. Never had an issue with plywood. (Stick
lumber, on the other hand…)

different batches of plywood commonly have slightly different thicknesses, just
enough that if you are making tabs and slots you need to measure each piece of
plywood

What direction of adjustability are you referring to?

I’m planning on using a rounding bit on the edge of each insert as well as the
sled to avoid catching. Is that not enough?

Bar didn’t think so when he was using a 2x4 with a rounded edge as a beam
across the bottom.

Oh, yeah. Thickness. In thought you were referring to squareness or uneven edges. You’re about that. I’ve had sheets vary in that dimension from 3/4 down to 11/16. I didn’t think about it, as that little difference never comes into play in the construction I do. I guess I’ll see how it goes. I get all my ply from the same vendor and manufacturer. Here’s hoping that by staying consistent, I’ll avoid variance.

The top bar on your frame looks kinda skinny. I would worry that the motors would twist under load.

Disclaimer: haven’t built ours yet, so I’m not talking from experience.

It’s 1.5" x 1.5" x 1/8" angle steel. Pretty stout stuff. I added a third support in the middle to mitigate twist and keep the bar from sagging over time. I could use another 2x4, but I’ve got lots of steel hanging around. We’ll see how it does.

I really like your “trough” idea to hold a supporting board. I was planning an adjustable skirt so I wouldn’t have to keep a bunch of different thicknesses around, but if you have the room to store inserts of different thicknesses, I can see that as being a super quick way to adjust the bottom skirt. Just put in a plywood insert the same (or close enough) thickness at the work piece and away you go!

Yeah, I was originally thinking of some kind of complex mechanism with adjustable depth, but three different inserts will take about 10 min to make and can come out of already existing scrap.

Nice frame Rocky_creeker! I’m going to threadbomb here as I’ve had an idea recently about fixing sheet material to the frame using plastic drywall fixings. I’ve experimented using these to keep sheets flat against the frame and would assist in holding smaller workpieces in place. The key benefit is that they are plastic and as such shouldn’t cause any catastrophic events if the milling end accidently hits one. 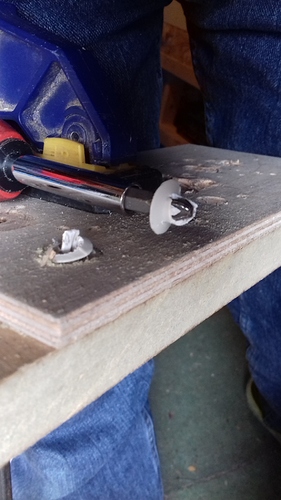 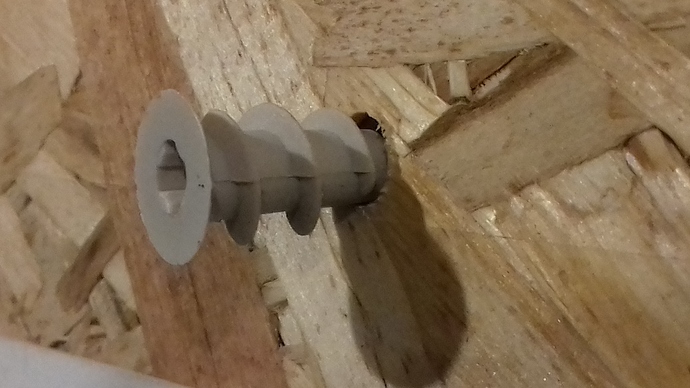 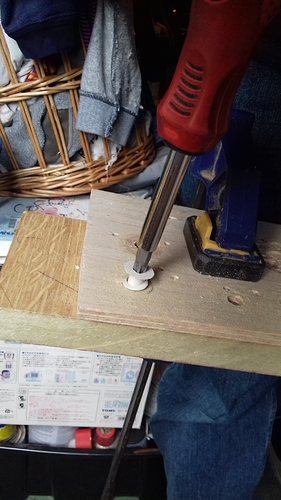 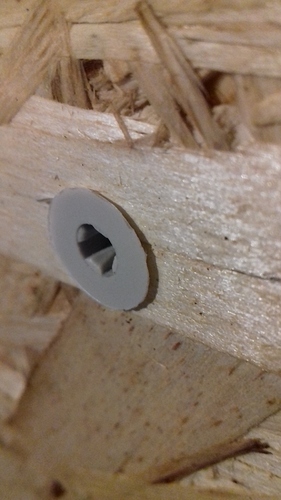 20180312_113627.jpg1152×2048 794 KB
!
For the UK drywall fixings I have an 8mm hole needs to be drilled to accept the plastic plug. This can them be screwed in to bite in the backboard. The front face tends to stand proud of the surface a tad, but this can be sliced off with a knife to stop the sled catching on it. If you are a little heavy handed with the screwdriver the heads will conveniently shear off! The plastic from which these are made isn’t very strong and as such this application is probably better suited to OSB and softer materials. The plugs don’t fare so well in the super dense MDF!
2 Likes