Hi I’m Rob and I am currently saving money for my Maslow kit and looking forward to building some projects.
I have experience with Autocad, hand drafting, design, engineering, drawing, Woodworking and Remodel Carpentry.
I have a small shop in Reno Nevada. I’ve attended Burning Man a couple of times and there’s quite a community of Reno burners including Architects and Carpenters who would be very interested in the Maslow. ( I’ve been trying to spread the word, don’t know of any on order for the Reno area yet.)

The Burning Man organization itself may be interested also, but they have quite a bit of money, property out ad joining the Black Rock Desert, and probably full-size industrial CNC Machines of Their Own…but Plywood, osb, flat-pack and Tab and slot are commonly used on the Playa because it works so great to flat-pack into containers after the event. (Or burn!)

So assuming I have pro cured a Maslow CNC by this coming Labor Day and a ticket to the event, I’m planning on bringing it out there on my 12 foot flatbed truck…Set it up in a tent with generator and dust collection and build stuff right there on the Playa…

Maybe by then I’ll be good enough to build repair parts for people’s camps, or plug in their thumb drives and cut out parts for their own projects. There’s a lot of building on the Playa at Burning Man. It’s a month and they build a whole city out of plywood and OSB.

So my question is; Does anybody know of anyone planning on bringing at least one Maslow to Burning Man this year?

Has the Maslow team themselves been to burning man? Have you guys (Bar?) considered setting up your own Maslow camp with about 10 machines cranking out all kinds of cool furniture…etc and exposing your ideas to about fifty thousand of the world’s coolest makers?

but it’s definitely for networking and sharing ideas.

Again, I’m in Reno which is the nearest major airport and only about 2 hours from Burning Man, with a shop big enough for four Maslow’s. Also I am definitely planning on going to the ‘Burn’.

If there’s not already plans in the works, I could help set up a CNC networking and building camp…featuring ( or sponsored by?!) Maslow.

I have about a hundred ideas that include burning man and the Maslow. Some of these are money-making and some of these are networking. There is plenty of money to be made at Burning Man outside of the event ( in nearby Gerlach, via websites, or right here in Reno.) If you have great flat-pack on the playa ideas and want to make some Playa Furniture or Art but maybe need a place to touch base in Reno on the way…

@Rob_Justin
Welcome to our group. I like your idea. How would you power the Maslow? Generator? Solar?

I have been in the past but not in the last couple years.

There actually was one on the plya last year that we donated to the “burners without borders” camp! 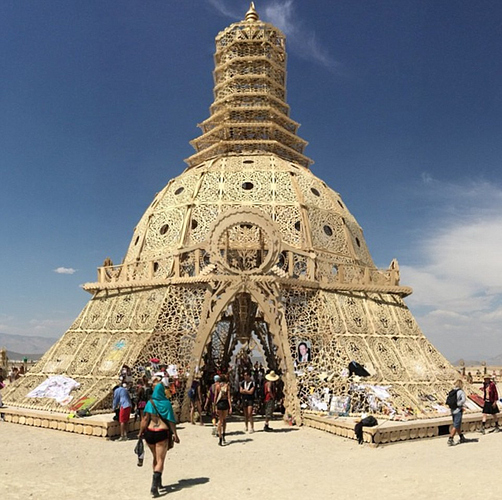 I would feel a little bit strange about anything too promotional because that seems like it’s against the spirit of the event, but we do want to support people doing cool things!

Thanks for the welcome and your interest.
There are plenty of options for power… I like the idea of solar, but it’s very common for every Camp to have its own generator, or more than one considering the on-board generators in RVs. I believe some of the larger camps even get power from burning man who bring huge construction generators and temporarily bury power lines down the main roads.
Maybe the first project on Playa would be some vertical wind generators. The Maslow could cut the complex curves and plywood can be bent.

I’d like to create an interactive section/tent/shop where visitors can try their hand at 3D design, assemble projects or maybe even just do some sanding to earn a free thingamajig.

I’m considering simply approaching some of the large sculpture building camps once the grant money has been awarded and designs released. I’m going to look into it, but it’s my assumption by the time I am in possession of a Maslow and familiar with its use, it may be too late to write a grant proposal.

“I notice you’re planning to make a giant sectioned model of a Tardigrade out of plywood!
Would this CNC machine on the back of my truck help?..”

Ooh sweet summer Oregonians, the spirit of the 90s is truly alive with you!

There’s more VC funding, dehydrated and tripping balls, walking around that place than exists, in any form, in most of the rest of the country…