I am trying to measure the rotational radius of my Metal Maslow sled. Metal Maslow told me this is “about 7 inches”, but I assume I need a bit more precision. I put a V tip bit into my Dewalt 611 router, and a long nail in the cotter pin hole on one of the arms to trace its path around the router center. I measured between 7” and 6-3/8” radius.

Questions for Metal Maslow sled users:
Should this number be constant through the arc?
What is your rotational radius?
Which router are you using?
Is your router centered on the large hole at the center of the sled? Mine is offset. I am wondering if the arms are centered on the thru hole and not the router. 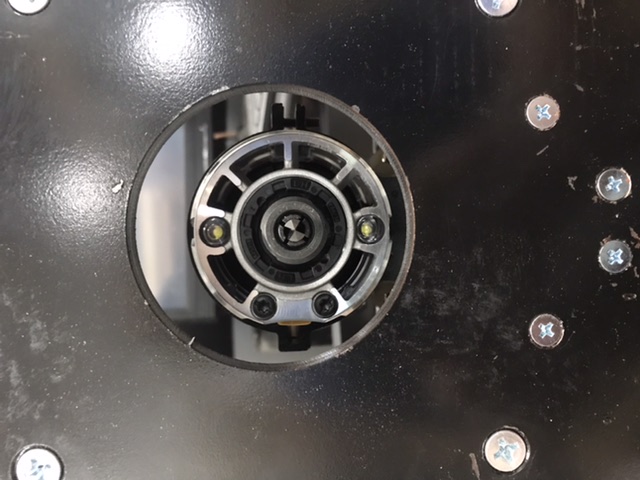 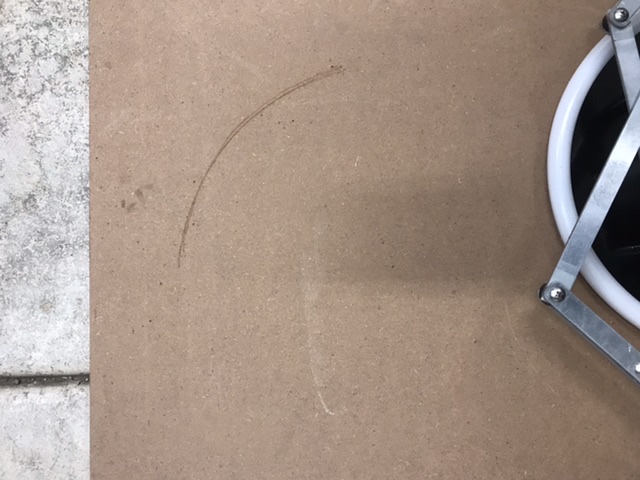 I have a Metalmaslow, I have the radius set at 175mm (6.89 inch). I measured the length of the metal arm at the hinge points. I figured this has to be the rotational radius. Actually the pin connecting the chain to the metal bar should be on the centerline for this to be 100% correct but I get pretty accurate cuts so I keep it for now.
This radius is constant.
I’m using a Makita router RT0700C (220V Europe). I Ordered the wrong clamp, so I fixed that with a clamp from Alie (the one in the second picture) I centered the router bit as accurate as I could in the middle of the laser cut hole in the metal plate. Since the plate is laser cut I assumed that the center of the hole should be the center of the rotational radius. I checked that by cutting a hole with the router in the frame board. Then I rotated the sled (by hand) and plunged the router bit again into the board. Ideally the second cut hole should land in exactly the same spot as the first hole leaving a perfectly round hole. My hole was a bit oval but for now good enough. 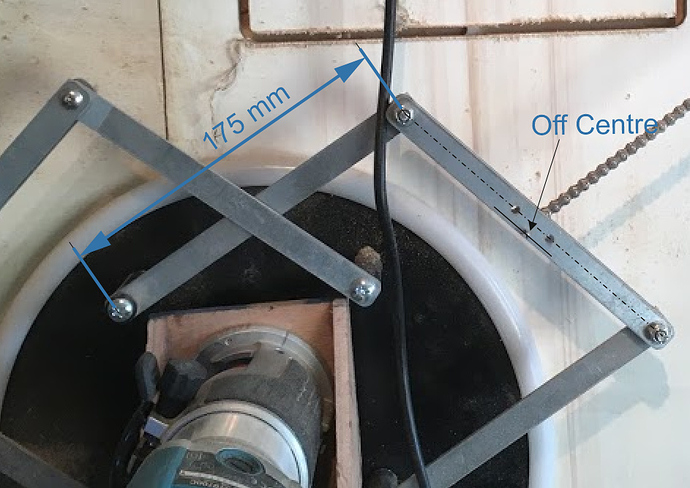 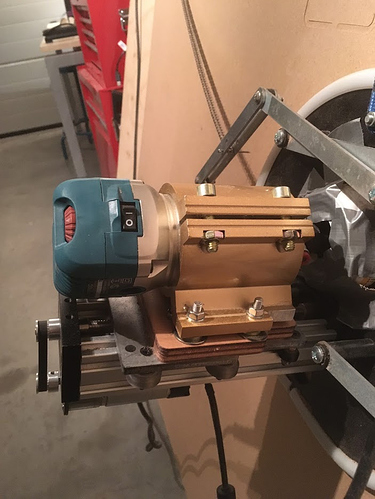 I put a V tip bit into my Dewalt 611 router, and a long nail in the cotter pin hole on one of the arms to trace its path around the router center. I measured between 7” and 6-3/8” radius.

Questions for Metal Maslow sled users:
Should this number be constant through the arc?
What is your rotational radius?
Which router are you using?

I have been using Porter-Cable 690LR 11-Amp Fixed-Base ( model one of these: https://www.woodroutersreviews.com/ ) for the last half a year, and had no such problems at all. It has so much pros, that I wanted exactly this model. It has awesome and powerful 11-amp motor, and what I love the most this router can be used for high precision cuts.

FYI according to metal maslow instructions you have you triangulation arms on backwards. the small cotter pin hole should be on the outside not the inside edge. Don’t know if that would have that much of an impact on your accuracy/precision but it may help a bit.

Now I understand that strange line in the instructions: “ALL PICTURES BELOW SHOWS THE ARMS IN WRONG ORIENTATION. PLEASE HAVE THE SMALL CENTER HOLE AS FAR AWAY FROM THE CENTER OF THE SLED. “

I couldn’t figure out what they meant with the small center hole. What is also strange is that I got my Maslow sled with the arms already assembled in this apparently wrong way.

Maybe I’ll change the position, or drill a hole in the centerline which in my opinon is the correct position.

But anyway thanks for pointing this out to me, another MetalMaslow mystery solved!

took me forever to figure that out myself… The machine is cool… but - man - the instructions are nominal.

Thanks for all the info. I measured it out and need indeed the beam for the z-axis is in the wrong location, and if I adjust it I should have the router centered to the linkage arms, which is centered to the hole. I guess some spacers were included to do this, but the are the wrong size. Considering making the correct spacers, or just abandoning this sled and building my own with a more proper z-axis setup.

@Sintrogers I also noticed you do not have bolts on either side of the cotter pin hole. My arms came with bolts through these two holes and plastic sleeves. On one arm they were tightened down all the way, and on the other they were super loose, so I am not sure they are really necessary or how they should be, but assume somewhere in the middle (just snug) is right. Did you get these, or did you take them off? Interference issue?
Also, I believe everyone received their arms assembled incorrectly and had to change them around to make the cotter pin face out.

The arms are not assembled incorrectly. One can simply flip the arms around if they want the cotter pin the other direction. This does not require dissembling them, you just rotate them. And it really doesn’t matter which direction the cotter pin is as long as it is the same on both arms and one puts in the right dimensions. Some people don’t like that the nuts are on top on one set and on bottom for other set, but that is a cosmetic issue, which does not effect performance.

While we could of make a bunch of z axis holes for different sized routers, we decided it was easier to use spacers to make the center of the router match up with the center of rotation. Ridgid and Makita Router clamps match up automatically. The dewalt clamp requires spacers be added.

the plastic spacers are not really necessary, just make it easier to line up chain and cotter pin.

It is a bit of a puzzle to get the router in the center of the hole. I made a drawing to figure it out. I solved the distance with a piece of plywood which I bolted to the z axis sled with 4 countersunk bolts. Then a used 4 carriage bolts and 2 washers for each bolt to get the clamp in the center. I used carriage bolts because they don’t slip and I was able to line up the clamp on the sled from the outside without having to disassemble the z axis everytime I had to adjust.

Regarding the bolts on either side of the cotter pin hole, the arms didn’t have them when I received the package. The only purpose I see for them is to prevent buckling of the arms, but I made quite some cuts and the arms work fine. No deformation of the arms at all so I don’t need them.

If you keep them on I would suggest to tighten them down. The arms hinge at the ends and in the middle there should be no movement.

I really like the laser cut sled, it’s stiff and accurate. And the arms and Z axis work great. Getting it to work properly is not easy but don’t give up, you will get there. 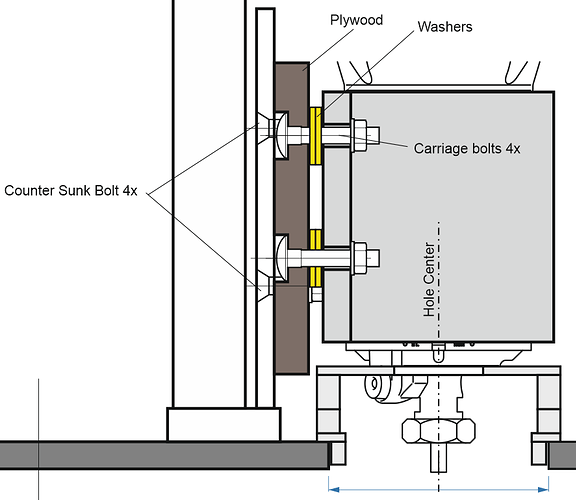