Cut out a Horde symbol to try out my machine and it did a good job cept for my Z axis popping out and not engaging all the time. Had to baby sit the whole process. Really wish that my Z axis worked well and I would be set! Rigid base is really not meant for this. Might have to move to the other Z axis modifications that i have seen on these forums. Going to try to fix the project with a flap disc and try to get rid of the non wanted lines. Any advice on trying to improve the Z axis without building a base? 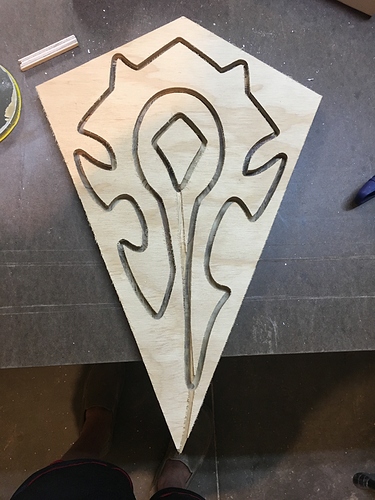 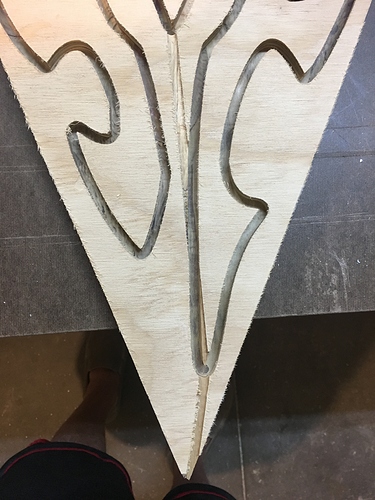 I tightened the nut that holds the shell a bit to remove some slop. Lubed with turtle wax. Look up the bungee cord mod that seems to help too.

Z axis only moving the router some of the time Hardware

Alright. Finally got back to address my issues on the z-axis. I believe my main issues were the router itself, I got one from the bottom of the QA heap. I had the bungie cord with preload on there router but I was still experiencing issues. In the end I think the bungie was hurting the performance, I needed something I could more accurately reproduce over and over. More on that later. In the end I did a couple things that really have made it rock solid. First thing I did was check to see how …

Here is a good post on solving that issue.

Mine has been working after I:
Added rubber bands to keep constant downward pressure on the router.
Looked for highspots in the inside of the router base. Especially in the channel where the bead on the router lines up. File this down slightly

Loosen the router base clamp just enough so the router slides freely but does not have a lot of slop.

Wax the the router where it slides in the base.

Don’t give up on it, it gets better after you work out a few kinks

This happened to me as well on one build as.The nut holding the motor to the z axis came loose so the bit stayed at lower position. I now tighten everything down before hitting play. Don’t worry though practice makes perfect! Looks like a fun project!

This may be super late and you might have already fixed it but recently I have been working on both enhancing a stock Maslow with ridgid router and also designing and creating an entirely new Z Axis. The first I found some great resources (Cheap fixes for z-axis slop on the Ridgid R22002)
that I am actually implimenting tomorrow and am hoping for some good results. The build on my z axis has been slow but hopefully if I can get it operating soon (fingers crossed) I will do a write up on that also. Hope this wasn’t too late!

Great - that forum post has been replaced by a Community Garden project. Improvements are kept up-to-date there. If you find a way to improve the existing fixes, let me know / generate a PR if you know how to use Github!